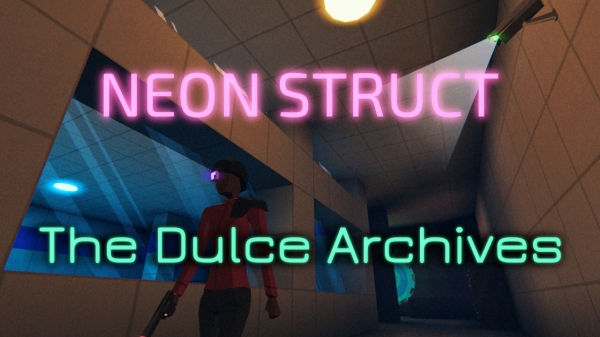 Investigate a secret government facility in the New Mexico desert.

In 1979, an Albuquerque businessman named Paul Bennewitz alleged that he was receiving alien signals and secret government communications on his radio. Over the next decade, Bennewitz went on to reveal that he’d discovered the location of a secret government facility called Dulce Base in the New Mexico desert, though this claim has yet to be substantiated by hard evidence. Nonetheless, the UFO community took to the Dulce legend with the same passion as they’d done with Area 51, and it remains a staple of their lore to this day. Dulce Base has been discussed in books and on television, but never in video games. That changed with last summer’s release of The Dulce Archives, an expansion for Neon Struct.

Neon Struct is an indie stealth game released last spring. Though the game’s core audience is tiny, it was praised by several PC gaming publications for its simple yet engaging stealth mechanics and intriguing, neon-powered world. Neon Struct is one of the better stealth games to have been released in recent years, even though the game’s writing is sub-par, and leading lady Jillian Cleary is about as interesting as a pebble. Gamers were still impressed by Neon Struct‘s all-stealth approach to fighting enemies. Additionally, the game’s central message about government surveillance programs subverting personal liberty is very relevant right now.

Neon Struct: The Dulce Archives seeks to preserve Neon Struct‘s conspiratorial atmosphere, but moves it away from the intrigue of federal agencies and into the world of science fiction. Though this is a significant diversion from the themes of the main game, The Dulce Archives relies no less on stealth and subterfuge. The expansion takes place in 1997, 18 years before the events of Neon Struct, and follows an anonymous private eye as he breaks into Dulce Base. The desert facility of UFO legend is alive and well in the Neon Struct universe. 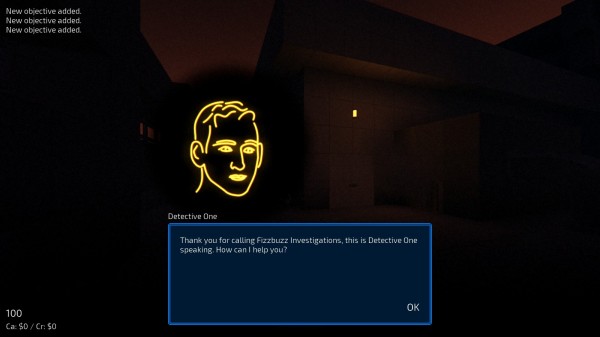 Detective One is the protagonist of Neon Struct: The Dulce Archives.

Detective One has entered the grounds of Dulce at the behest of a mysterious client, who wants him to break into the main facility. The client is convinced that the federal government is hiding something incredible, something dangerous, beneath the sands of New Mexico, and that it needs to be exposed. To that end, players are to infiltrate Dulce Base, descend beneath the surface, and find out exactly what the government has hidden away in the dark. No small task.

Detective One has no weapons or armaments on his person; a pity, considering that the base is crawling with soldiers and secret agents who are armed to the teeth. Just like Jill Cleary in the main Neon Struct game, Detective One has to rely on stealth and subterfuge to get around. Players can knock enemies out from behind, but guards will sound the alarm if they find one of their buddies out cold. Detective One can move unconscious guards away from the main patrol paths, and make use of several gadgets to disarm foes. A lot of these items are returning gadgets from Neon Struct, such as the Rubik’s Cube-looking stun grenade.

Dulce Base is crawling with enemy troops, and taking them out requires a deft touch.

Although Neon Struct: The Dulce Archives takes place in a different time and setting than the original Neon Struct, players would never guess that from looking at the game itself. The Dulce Archives imports the exact same facade and items as the main game; in no universe did 1997 look identical to 2015. Not to say that the game looks bad (the visuals are colorful if a bit repetitive) but veterans of the original Neon Struct will immediately notice no change in visage. It would’ve been more interesting to deck out The Dulce Archives in a more retro style, to make the expansion feel distinct from the main game.

Having said that, Neon Struct‘s visual style is not without some merits. The entire game comprises a world of crash test dummy-like humans, with few facial features and no voice acting. The abstract design choice won’t suit all tastes, but it compensates for its lack of detail with bright colors. The Dulce Archives’ textures retain the cyberpunk aesthetic of the original game, and the entire expansion is accompanied by an eerie film grain. This, along with The Dulce Archives’ sunset setting, helps to reinforce a gloomy feel of conspiracy. There are a few new soundtracks accompanying the game, but they’re a lot less endearing than the soundtrack The Home Conversion made for Neon Struct. 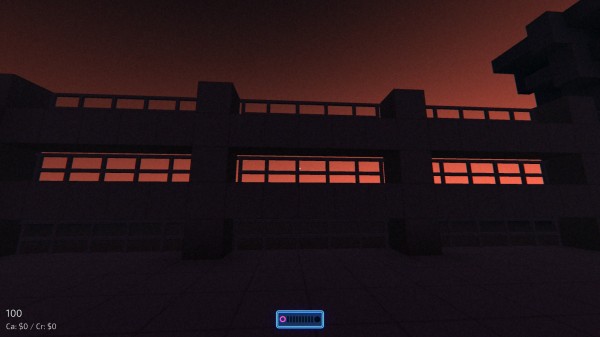 The Archives at sunset. Note the film grain on the screen, and the extreme lack of money on the bottom left. Both are hard to ignore.

It’s also worth noting that The Dulce Archives‘ gameplay is identical to that of the main game. Players are at the helm of a different protagonist, but the methods and tools all remain the same. It’s a bit of a disappointment for returning Neon Struct fans, because there’s nothing new to experience in a game mechanics sense.

At the same time, though, there’s something to be said for Neon Struct‘s minimalist stealth gameplay, where danger is around every corner and being quiet as a mouse is the only way to succeed. Neon Struct‘s heavy emphasis on stealth is what made it a sleeper hit last year, and it’s also what gave the main game some of its novelty. Players who enjoyed that aspect of Neon Struct will find plenty more in the expansion.

Stealth is not just a matter of style. It’s a matter of survival. Some enemies in this game are simply impossible to defeat, and must be avoided.

The biggest change that The Dulce Archives made in terms of gameplay, indeed the only change, is the intelligence of its enemies. The artificial intelligence in the main game is wildly inconsistent; players can sneak right past a forward-facing enemy in one level, and alert the entire NYPD from the opposite side of Manhattan in another. It’s frustrating to spend ten minutes sneaking through a parking garage, only to somehow be spotted by a cop who was ten skyscrapers away. The difficulty level didn’t seem to affect the AI’s propensity for clairvoyance.

This time, the AI feels a bit more consistent. All enemies have the same ability to detect and chase Detective One, depending on the set difficulty. It eliminates the frustration that the original game occasionally inflicted. No one should have the cops on their rears just for ordering a hot dog. 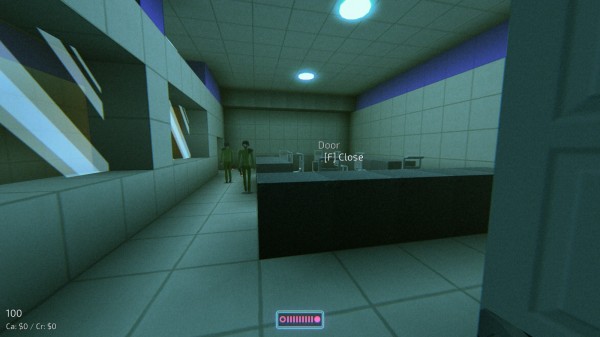 The enemies in this game are formidable enough without psychic powers.

After avoiding some surface guards and a pair of nasty robots, Detective One finally makes into the base proper. He discovers that, per his client’s prediction, this sleepy-looking garrison is actually a hive of activity. He tries to blend in among the soldiers and officers on the base, and learns that the secrets he’s after are one level deeper. It’s at this point that the expansion shifts from stealth gameplay to open-world detective work, which was also present during certain levels in Neon Struct.

Asking around the base and exploring the area leads Detective One down the same narrative threads that Jillian Cleary will walk 18 years later. Though The Dulce Archives covers a science fiction topic instead of the more immediate threat of government surveillance, the expansion is able to carry the same gloomy, conspiratorial feel that the original game captured. Both games are highly reminiscent of the original Deus Ex in this regard, because just like when JC Denton uncovered a conspiracy in that game, players are following the same types of clues in The Dulce Archives. Detective work makes for a natural counterpart to stealth. 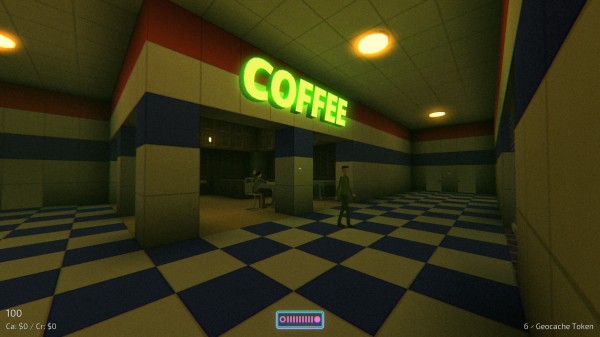 Don’t be fooled by the cheerful sign. This place is a den of lies and scariness.

As for Detective One, the developers over at Minor Key put a bit more effort into fleshing out his character than they did Jillian Cleary. In Neon Struct, Jillian is little more than an avatar for the player to use in following other people’s orders. Detective One is on a mission, but he comes up with his own means of advancing those goals instead of being yelled at through an earpiece. A few more bits of exposition on our leading man are scattered through conversations he has on the base.

The main narrative itself is quite short, clocking in at about an hour of gameplay, but it carries the same theme as that of the main game. Governments cannot always be held accountable for their actions. Incredibly brave people have had to step up and unmask the decisions being made for citizens, but not by citizens. Though The Dulce Archives‘ revelation is quite different from that of the main game, that idea is still held closely throughout the expansion. The Dulce Archives contain some strong narrative ties with Neon Struct, but none that will be spoiled here.

Neon Struct’s central message of government subversion of rights is front-and-center in The Dulce Archives.

Despite its short length and offering almost no new gameplay elements, Neon Struct: The Dulce Archives is a worthy addition to the main game. Though it contains only an hour or so of content, the expansion can be downloaded for free from Neon Struct‘s Steam Workshop page.

Regardless of The Dulce Archives‘ simple narrative and underwhelming character development, the game is admirably adhesive to a discussion about government power. In light of recent developments, especially Edward Snowden’s document leak, The Dulce Archives champions a discussion that citizens everywhere should be having, without being nearly as dry as, say, C-Span. Players need to own Neon Struct in order to play this installment, but get it all and enjoy it all. Stealth fans will be delighted, and conspiracy theorists will feel vindicated.

You can buy Neon Struct: The Dulce Archives here.