Take control of zany characters and take part in even zanier battles to save a bright world.

Blizzard Entertainment is well-known for such giants as Warcraft and Diablo, and they’re also well-known for producing slick games that run well on the PC platform. What the company is not known for, however, is producing first-person shooters. The closest that they’ve ever come to such a feat is StarCraft: Ghost, a cancelled third-person shooter that was to be released in the early 2000’s before its premature demise. Overwatch is both the latest Blizzard game and its newest IP. It bears investigating whether the godfather of MMO and strategy games can deliver on something they’ve never done before, and what gamers can expect of the result.

Overwatch is the first Blizzard game in a long time to not be a derivative of a pre-exiting intellectual property. Hearthstone is a Warcraft spin-off, and Heroes of the Storm is an arena melting pot for all of Blizzard’s major franchises. Overwatch, as previously stated, is also the first step in a new direction for Blizzard: multiplayer first-person shooter.

Like Team Fortress 2, Overwatch tries to stand out in a crowded genre with bright, cartoonish visuals and simple gameplay. It is a far cry from the gritty military settings that Call of Duty and Battlefield have used to over-saturate the market in recent years. Overwatch is instead a bright, colorful shooter with ample amounts of fun, but its gameplay is also easy to understand.

What little backstory Overwatch has is narrated by an anthropomorphic gorilla warrior named Winston, who explains that the world was once plunged into chaos. The Overwatch, an alliance of superheroes, rose up and pacified whatever was causing this chaos, and faded into obscurity as the world returned to peace. But, this same mysterious force is returning, and now it’s up to the Overwatch to reunite and save the world once more. There’s some vague mention of evil robots, but that’s about it.

Narrative is clearly not the point of Overwatch, nor a strong suite in anyway. The game’s aforementioned heroes spend all of their time fighting each other instead of this unseen malevolence that Winston warns against. Indeed, there doesn’t seem to be any chaos in this bright, futuristic world except that caused by the heroes in each match. It’s a comical contradiction, but hardly a deal-breaker.

The narrative in Overwatch is nonexistent, but that doesn’t take away from its characters’ personalities.

As of writing, Overwatch features 21 characters that players can use in matches. Although these characters can be grouped together into approximate offensive and defensive roles, each one has unique weapons, powers, and means of getting around the battlefield. Some characters get up close and personal with shotguns, while others fight from afar with sniper rifles. Still more can fall into the fray with massive melee weapons and even ninja stars. There’s a lot of variety to choose from.

It didn’t take long for Overwatch‘s first players to note some of the game’s imbalances. McCree, the cyber-cowboy in the screenshot, could easily murder the toughest enemies in little time. The Widowmaker, a sniper character, was similarly overpowering in certain situations. However, Blizzard has been very proactive about finding and patching these problems to make the game more balanced. For anything else that can be said about Blizzard, at least they’re attentive to detail.

Blizzard has done a good job of balancing Overwatch’s characters against each other.

Overwatch starts off by introducing players to the basic mechanics of the game. The tutorial is not unlike anything offered by any other shooter, but it does feature a combat area where players can test out different characters against unfortunate robots. It’s a great way to become acquainted with various characters, and gives players a chance to practice away from the chaos of a match. Blizzard’s overture toward novice shooter players means that the game is truly built for everyone at all skill levels.

The issue with so many of the shooters out there is that they all expect their audiences to know the ropes automatically, or to “git gud” in matches if not. To be fair, most shooter players will figure out what to expect from game to game, but a lot of novice gamers who might otherwise enjoy these matches are intimidated away by the lack of an intro. Overwatch supersedes that setup, and thus the game is accessible to everyone. 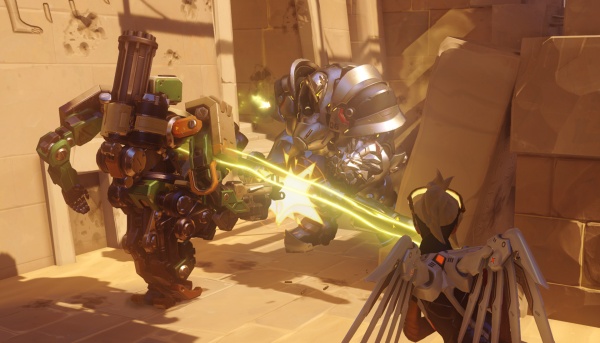 Overwatch’s kindness to new shooter players gives the game access to all gamers.

Although each character varies wildly in terms of loadout and abilities, they all share a set of common traits. Each character has a primary weapon, a secondary weapon, and a unique means of getting around the battlefield quickly. Each character also has a special ability that charges up after a sufficient number of kills or completed objectives. Widowmaker, for example, has a sniper rifle as her primary weapon, a poison bomb as her secondary, a grappling hook transportation device, and an enemy-revealing visor power. Sure, other characters might have completely different weapons and powers, but this core setup is what newcomers to Overwatch can expect from all of them.

It is this simple arrangement of powers and weapons that makes Overwatch so easy to understand. Everyone has a gun, a bomb, some wheels, and a superpower. Figuring out how best to use them is one thing, but Overwatch does away with maze-like menus of guns in favor of this very simple, very pure, system. This also makes it relatively easy to pick up a new character, learn what they have, and go about shooting everything.

Overwatch is easy to understand, which makes it more fun.

Most matches in Overwatch are objective-based. Players can capture a series of command points, fight for control of a rocket-powered railway, or simply wipe each other out. Teams obviously function better when each player serves an allocated role, but it’s also easy and fun to descend into the melee as whomever. The command point match setup is particularly fun, as two teams descend into battle to maintain control of more flags than the enemy. The first team to two won rounds wins the match.

From there, the gameplay is fairly conventional for a multiplayer first-person shooter. Kill all the enemies, kill them again when they respawn, complete the objective and win the match. Most matches in Overwatch are complete chaos, as players teleport or grapple around the battlefield, shooting off as many rounds as possible. This chaos helps to offset each match’s rather generic presence. Everyone knows how to shoot someone in a match. What no one knows is the fun of using a grappling hook to do so. That’s where Overwatch comes into play. It’s pretty fun. 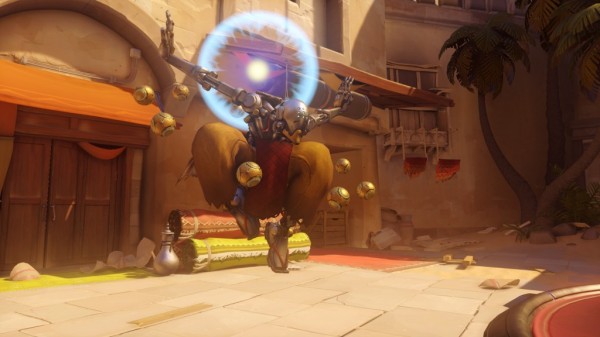 Overwatch is a remarkably fluid first attempt at a shooter, coming from Blizzard. To be fair, Blizzard has the ability to throw enormous sums of money at whatever problems come up during development, but it’s impressive how well-made their first shooter is. Each character’s weapons go off with satisfying force and bombastic sound. Gunplay and movement are both very smooth, as players fire volleys at each other while zipping up and down the battlefield. Overwatch runs well too, with absolutely no glitches or technical hiccups to speak of. Matches are easy to find, and the community is amicable.

Indeed, aside from the aforementioned character imbalances, it’s difficult to find fault with Overwatch. It’s not a perfect game, but it makes a priority of being accessible to everyone, and that’s what makes it great. Overwatch also looks gorgeous, with big, bright visuals and a cartoony world that offers no foreboding to new players. At times, this setup feels quite derivative of Team Fortress 2, but Team Fortress 2 pioneered neither simple gameplay nor goofy visuals.

At worst, Overwatch is an irreverent, cartoon-like melee. At best, it’s a refreshing take on the multiplayer shooter genre, bucking entrenched convention and opening its doors wide open to both novice and expert shooter players. Everyone, even traditionally shooter-averse gamers, will find something to enjoy in Overwatch‘s zany gameplay, beautiful worlds, and ease of accessibility. It’s the funnest multiplayer shooter to have been released in a very long time, and it’s something that everyone can have some fun with.

You can buy Overwatch here.