Save as many people as you can from a city overrun by zombies.

Zombie survival has become the biggest cliche in gaming. It makes for great drama: what lengths will a person go to to stay alive in the face of hungry corpses? When this question is handled in the context of a narrative, as with The Walking Dead media, it can result in some powerful stories. When it’s handled in the context of mindless action, it can become mired in repetitiveness (although Left 4 Dead is a fun exception to that rule). Another exception to the rule is State of Decay, an open-world zombie survival game that forsook narrative in favor of an addicting mix of survival and scavenging. I gave it an outstanding recommendation for having pulled these elements off so well, even without a true story, so let’s see if State of Decay: Lifeline, a DLC, follows suit.

Lifeline is presumed to take place during the events of the main game. A zombie virus has broken out and turned its victims into shambling monsters, leaving groups of survivors to hide from and fight the waves of dead. Lifeline swaps out the rural setting of State of Decay in favor of an urban environment: the city of Danforth. Additionally, you get to play as the military, and your unit is charged with finding survivors and evacuating them the hell away from hell.

There are named characters in State of Decay: Lifeline, but as with the base game, the differences between them are so minimal that they might as well all be named drone. How the game works is that you start out with a given protagonist, but can switch to control of other characters once you’ve become close enough buddies with them. The system allows players to rest up tired characters and switch to fresh ones, so as to keep salvaging and curb-stomping zombies without skipping a beat. It’s a cool little system and part of what made the original game so addictive.

You can switch between different characters if the one you’ve got gets hurt or worn out.

Unfortunately, the caveat with this system is that each player character has about as much depth and development to them as a cardboard cutout for a Michael Bay movie. Sure, they’ll throw out their little quips and jokes from time to time, but there’s no backstory or character development to be had. More’s the pity; your soldiers are in enough danger without no cause to care for their well-being.

In the original State of Decay, your goal is simply to survive. The developer put in a flimsy little main story line to throw me and other narrative-seekers a bone, but really, all you do is loot, shoot, and scoot. State of Decay had this set up in such an addictive, fun manner that I took no grief with a lack of story. In Lifeline, the blurbs they try to pass off for a story see your troops running around Danforth, trying to find a disparate team of scientists who might know how to cure the zombie plague. 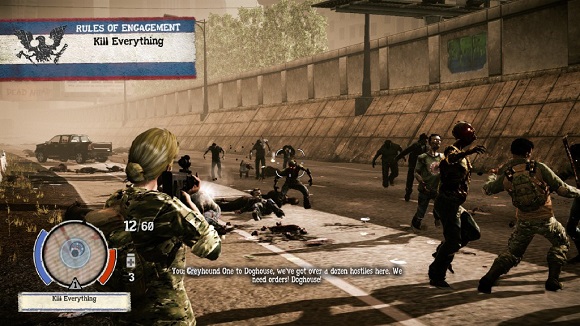 In Lifeline, your job is to rescue the nerds.

Unfortunately, these missions come at the expense of what made State of Decay so fun: looting. Zombies will attack your flimsy base in waves, meaning that if you spend too much time sacking Danforth, people die and your mission will fail. I found a thinly disguised tower-defense simulator to be far less engaging than skulking around buildings and gutting them blind. In Lifeline, Undead Labs tones down that aspect of the game in favor of defending your base against wave after wave of zombies. Which gets old after the second or third wave.

Additionally, maybe it’s because I avoid tower defense games like the plague, but these sequences were soul-crushingly difficult for me. You can rig your base’s perimeter with bombs, but they only take out a handful of zombies. I also watched with astonishment as my NPCs forsook their walls and automatic rifles in favor of running outside and poking at the zombies with golf clubs.

Here’s a question, don’t think on it too hard: how many drugs do you have to consume over what period of time to favor exposing yourself in a needless melee, instead of sniping from the safety of an armored tower? 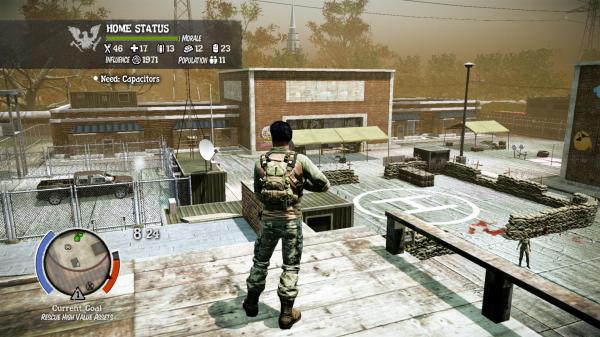 Please, Sergeant Num-Nums, enlighten me as to why a nine-iron is better than an AK. Or perhaps, more to the point, why your coding was performed by a madman.

Gameplay is little-changed from State of Decay. You play from a third-person perspective, get to where you need to go via vehicles, and ruffle through people’s houses in search of corn flakes and toothpaste. Minus the above-mentioned defense sequences, not much was done to tweak the gameplay. Base management mechanics return but the only real difference is that the shitter is now its own building. A welcome, if mundane, change to the lineup.

When this DLC was released, a lot of people were excited that you’d get to explore a zombie-infested city, myself among them. But you don’t. The city center with all the skyscrapers and stores and opportunities for savage fun is cordoned off by CDC barriers, leaving you with only the city’s outskirts. In truth, these areas are little less rural than the very rural Trumbull Valley in State of Decay. The map is a slow, concrete rimjob around the perimeter of the city, and attempts to break into it will throw up an automatic death screen. Fun, fun.

If you’ve ever been given free football tickets, only to find that they’re nowhere near the center of the action, that’s what this DLC felt like.

The most damning exhibit I have against this shoddy, loosely wound DLC is a bug I encountered a few hours in, when I was given a mission to rescue a story-critical character named Sasquatch, who more than anyone else showcased the horrific writing that went into State of Decay‘s dialogue.

Well, he died before I could get to him. I found his body bled out and chewed up in some godforsaken parking garage. And yet, I was allowed to continue the game. The missions simply capped off at that point, and I was left only with exploring the city limits, unable to finish the main game. Lifeline‘s lackluster narrative left me with no compelling reason to restart the game, and I’d had my fill of robbing houses and gas stations from the original game. So I stopped playing, right then and there, and have no cause to go back. After this review, I hope I’ve given you, dear readers, enough cause to never go in the first place.

That’s a wrap, folks! Please go back to cannibalizing and pillaging.

The failure of Lifeline illustrates that narrative can make or break a game, as can shoddy NPC coding. When word of this DLC reached my man-cave, I envisioned a gritty, grim showdown in a decaying city. To me, a modern-day Battle of Berlin with zombies sounds pretty damn fun.

They could’ve gone deep with the characters; there’s no limit to the motives one faces in a city overrun by hungry dead people. But nope; it’s a samey conga line of shallow characters, poorly orchestrated defense sequences, game-breaking glitches, and few true changes from the original game. Play State of Decay instead; it has its bugs too but at least it felt open and fun. Lifeline feels like State of Decay neatly wrapped around the thumb of a rabid multiplayer addict.

You can buy State of Decay: Lifeline here.