Contemplate the meaning of life as a mountain.

Christ, have I been doing this for two years now? Feels a lot longer than that, for some reason. Oh well. HAPPY 2015!!!

Breaking the mold can generate a polarizing reaction from gamers. Some will shower unadulterated praise upon given mold-breaker for rising up against some injustice (in our case, triple-A shovelware) while others deride and scrutinize what we’re presented with. Mountain is unlike almost any game I’ve ever played in that it provides me with both impulses. It does indeed break the mold, but I’m not sure it’s worthy of all the praise that’s come along with that.

Mountain is an indie game that bills itself as a chance to “fulfill your dreams of being a mountain”, hoping that the tagline invokes the “didn’t know I needed it until I had it” impulse common to myself and my fellow Steamers. An optimist would call it an ambient simulation, while a pessimist would call it an interactive screensaver.

Mountain‘s namesake, a giant peak that floats in the sky, is a self-aware being that the player has no direct interaction with. The game’s only player controls are the ability to move the camera around, and being able to play musical notes on your keyboard. That’s literally the entire scope of your interface in this game. Mountain‘s main events, including the peak’s musings on the meaning of life and the occasional random object that smashes into it, are both beyond the player’s control.

In Mountain, players can only control the camera and play musical notes. I’m not sure if the notes have any bearing on the mountain.

Every so often, the mountain will chime in with its thoughts on existence, asking “Who am I” and “Am I beautiful?” with enough regularity as to make me wonder if Mountain was programmed by an insecure teenage girl.

That’s all this game encompasses. A random thought across the screen every so often, the ability to play music, and listening to the gusts of wind. Random objects will collide into the mountain from time to time. My mountain guested such items as old-timey telephones, blocks with alien runes, a giant lollipop, a roll of toilet paper, and a smoldering meteor. As far as I can tell, neither these objects nor the notes you can play with your computer have any impact on what the mountain thinks or feels.

Your mountain can get pretty decked out if you let it go long enough.

You can see what I’m getting at with the interactive screensaver analogy. There are a few things that I will say in Mountain‘s favor; it’s relaxing to turn it on and listen to the wind, the notes, and the ambient sound effects. The graphics, while not amazing, are cute and colorful.

This doesn’t save the game’s dialogue from being a pretentious pile of gibberish. The questions that the mountain poses to you are a generic attempt to be “deep”, in the same vein as that subconscious art bullshit sweeping the galleries these days, or the tweets of Jaden Smith. In reality, these questions are just randomly strung together in an attempt to lend more meaning and more depth to Mountain than the game actually possesses. 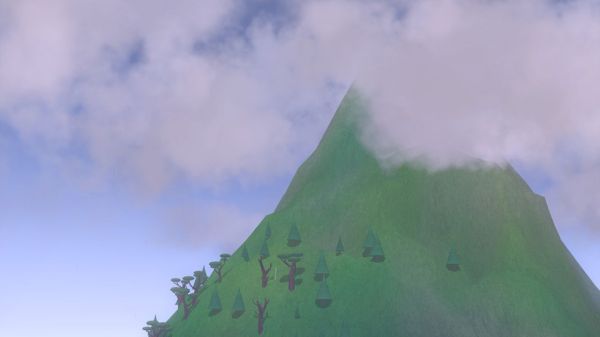 Stringing together some artistic license doesn’t make a great game.

I think Mountain is a product of a few trends prevalent in the indie scene. I’m glad that story-heavy games like Gone Home and Dear Esther are sweeping the races right now, but it also means that a few developers have attempted to cash in on the spectacle by making facsimiles of the all-story style, hoping to pass off bland, shallow dialogue as real storytelling. This method uses the subjectivity defense; that may work in English classes but I don’t think it can make a game’s narrative invulnerable to criticism.

Mountain, while a pretty game, hopes to achieve the same literary highs as Gone Home without putting in nearly as much work. It tries to be philosophical and moving, when really it’s just some cobbled-together game elements. They certainly look pretty, but you have to evaluate a game’s narrative by what it hopes to accomplish with deep questions. Gone Home accomplished discussing a crisis of culture and personal identity, and thus the questions in that game held merit. Mountain takes the same questions and just hurls their words randomly into the air, hoping to do the same. It does not.

You see what I mean about gibberish? Mountain takes random words and hopes to pass them off as some sort of deep narrative. Goddamn hipsters.

The other reason I wanted to discuss Mountain is that, despite its flaws, it’s a polarizing piece in the argument over what comprises a game. Mountain is a game. It’s not an especially great game, but it’s a game nonetheless. Let’s settle this whole “legitimate video game” nonsense right now, by declaring that a video game is a piece of interactive digital media.

You don’t need a fail state, action or guns to be a video game, that’s just absurd. Games are about enjoying and interacting with an electronic experience, and should not be so narrowly defined by SHOOT KILL BANG BANG. See? Problem solved. Mountain is a game.

This is the furthest you can zoom out.

I give Mountain a halfhearted recommendation based on the mixed bag it brings to the table. It’s pretty to look at and relaxing to listen to, but the questions it poses are pretentious, random, and a pathetic attempt at emotional depth. But, for an interactive screensaver, you can do a lot worse. Good thing it’s only a dollar. Perhaps you can create your own mountain and draw your own conclusions about the questions this poses, and what titles like Mountain mean for the swift rise of story-heavy indie games.

You can buy Mountain here.