Investigate an accident at a nuclear plant.

Every so often I like to search my home state of Utah for games that our rapidly growing digital industry is putting out. Thus far my roster has encompassed Undertow, an underwhelming side-scroller, and Shadow Complex, an awesome side-scroller. ERIE was developed by the wizards at the University of Utah’s Entertainment Arts and Engineering program about a year ago, and ever since has been one of the most popular indie horror titles on the Internet. I met a few of the people involved in its creation and decided I was in the mood to descend into a creepy nuclear power plant. Don’t get that particular urge too often, actually.

His orders are to investigate the plant’s meltdown and rescue any survivors. He, that is, you, breaks into the plant and sets about looking for clues.

“HQ, this is Colonel Kickass reporting, this place is creeping the hell out of me. I’d also like to confirm that my feet are attempting to reverse my pace for me.”

As Oliver makes his way deeper into the facility, he finds notes detailing the power plant’s inner workings and the people he should expect to find. ERIE is also riddled with the world’s greatest collectible: KITTIES!!!

I shit you not, there are about 10 cats scattered around the power plant, and you can rescue them. And why wouldn’t you rescue kitties from a gross old plant? I never had a second thought.

The cats don’t really have a bearing on the story but they’re a great collectible.

ERIE‘s suite of gameplay is refreshingly sophisticated, especially since all we’ve seen up to now is running and crying. Oliver can sprint, slide and dodge his way around the plant, giving you a great sense of control.

To help you navigate the plant’s maze-like hallways, Oliver carries a can of spray paint. You can mark dead ends and circles to keep yourself on the right path, and you’ll have to to make it to your objective.

This game usually lasts 20 minutes, but if you like to draw, the spray paint might extend your playtime. I drew a stunning rendition of a kitty-cat.

After shutting off a few alarms and staring idly at blood-spattered walls, I was plopped into a new, much larger complex of corridors.

But, I wasn’t alone; the game thoughtfully dropped in a friend with whom I could play tag. 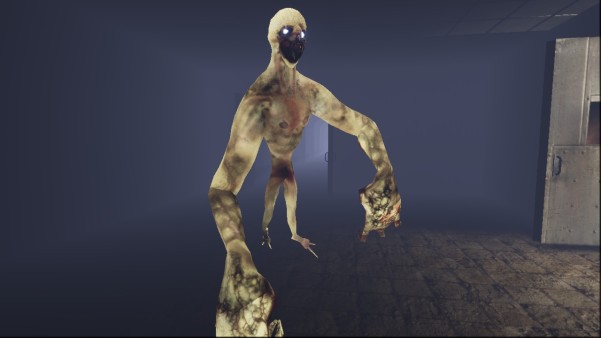 When I say “tag” I mean “stomp me to death and feast on my entrails”. Kind of a crappy game, really. Not for kids.

It’s at this point that ERIE‘s slow-simmered tension is brought to a boil, and the true terror begins. Armed only with your spraypaint, you must find your way to the exit through a sprawling maze of corridors and derelict rooms, all the while being chased by that thing.

The beastie never gets winded and is absolutely relentless in its pursuit. It also knows where you are at all times, though you don’t always know where it is. A great source of tension, no? Hang back to keep track of the monster but it might bite your head off, or run far away and scream like a little girl when it swings around a corner. Fun fun. And a great reason to keep track of where the hell you’re going. 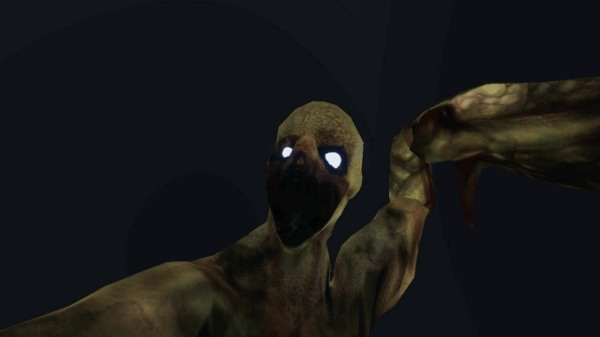 La di da, round the cornGEEZUSGODAAAAH!

The heart of ERIE‘s horror is the suspense of being pursued by a wild, hissing mutant thing while trying to escape. The game’s design is such that it’s easy to not only end up in the wrong corridor, but also to get turned around or worse, cornered. You also have to visit multiple areas to make it out of the installation.

The creature itself is also just… absolutely disturbing. Definitely the scariest monster we’ve yet seen this week. Between its deformed, disgusting appearance and the pounding gait with which it pursues you, I couldn’t get over how creepy it was. Not to mention that it only takes one hit for this thing to kill and eat you.

Oh for the love of…

While the monster is scary and a rush to get away from, it has one fatal flaw: stupidity. The creature’s AI is simplistic and it can be trapped rather easily. Because the monster never stops running, even to turn around, I decided to trap it in a three-walled enclosure and watched as it tried to run at me through one of the walls. No cigar, and I was free to explore the rest of the game with no worry. At that point, ERIE‘s creep factor took a serious hit.

ERIE has some of the most detailed artwork I’ve seen in any indie game. Copious amounts of junk and debris lay strewn around in a far cry from the relatively sterile environments of The Rake and Cold Fusion. It gave me a lot to look at, but the lighting in this game is off. Most lights throughout ERIE give off strange, incandescent beams reminiscent of a laser light show, not at all like the real thing. Some lights also give off way too much luminescence and make the game look like it was shot underwater.

My final complaint to register with this game is picking up notes. Oliver can interact with various notes and letters throughout the game, but for some reason he can only looks at them from a really steep angle, making them hard to read.

Compounding this problem is that you can only look at the notes for about five seconds before you are automatically returned to the game.

I consider myself a fast reader. ERIE disagrees.

Despite some annoying flaws both superficial and fundamental, ERIE is a stomach-churning and fast-paced creeper that will make horror fans coo with wonder. Or scream. Whichever. In any case I recommend the game wholeheartedly. And you should always support your local game studio! The game is available through the Desura service and a few other places. It’s free to download!

If Chris Diller, one of the principle directors of this game, is reading this, I apologize for putting this up eight months late. True, my late review was hampered by surgery, school and losing my phone, but still, a bit of a dick move on my part.

You can buy ERIE here.