Find your way home amid mismatched worlds and an unknowable alien mind.

Love them or hate them, the Myst games are arguably the most famous puzzle games available on PC. They’re well-known for a variety of good and bad reasons, including their beautifully designed worlds and their fiendishly – sometimes impossibly – difficult puzzles. The series concluded on a sour note with 2005’s Myst V: End of Ages, and developer Cyan Worlds entered a prolonged state of relative inactivity. That all changed a few years ago, when it was announced that the studio would return to develop a spiritual sequel to the original Myst. That game, Obduction, has long been coveted by the Myst series’s small but religiously fanatical fanbase. Now that it’s here, it’s time to assess what, if anything, these fans will find in a title that seeks to bring Myst‘s puzzle-laden worlds into the modern age.

Obduction was developed over a period of several years by many of the same people who worked on Myst back in the early 90’s. After a successful Kickstarter campaign (how often do those happen anymore?) studio head Rand Miller announced that Cyan Worlds would be developing a puzzle game in the same vein as Myst. Obduction would seek to emulate many of the same themes and gameplay mechanics as Myst, but with some refinements and changes to the original formula that would hopefully allow for a broader audience.

Just like Myst, Obduction is a first-person game that dumps the player in a large world riddled with riddles. The game opens with the player, an anonymous male or female soon-to-be explorer, making a nighttime visit to a small park in 1980’s America. As they take a winding, beautiful trail along the edge of the lake, the player is stopped in their tracks by a massive seed that falls from the sky. Before they can react, this alien-looking acorn teleports the player away from this world and into another one. Or perhaps more accurately, a fragment of another one. 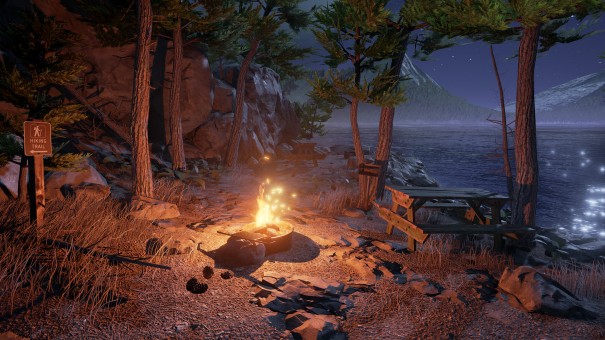 Since when did taking a stroll become so dangerous?

The player opens their eyes to find themselves standing in a desert, with buildings and items from all over human history just plonked down in the sand. The area they’ve landed in appears to be abandoned, and there’s a magical bubble shield separating the town from an alien-looking landscape outside. There isn’t much left in the local area, but it becomes clear that if other people did live here, they left in a hurry.

After a few minutes of traversing the dunes and trying a bunch of locked doors (of course they’re all locked, this is a Cyan Worlds game), the player befriends the town’s sole remaining inhabitant, a gruff cowboy named C.W. C.W. explains that the player is merely the latest in a long line of abducted humans who have ended up here, and that the massive tree in the middle of town is somehow responsible for it all. The tree is capable of taking anyone from anytime, making the town home to everyone from 1940’s war refugees to patrons of a ski resort in 2052. C.W. doesn’t know any more than the player why the tree does this, but he does feel like he’s closing in on undoing its power. Together, the pair agree to reverse their fates and get back home. 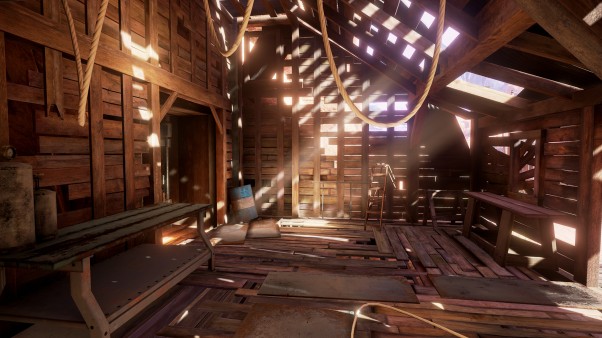 Not everyday that a Wild West town is across the street from a 1950’s gas station.

Obduction gives players a decent menu of options for embarking upon their quest home, including, thankfully, the option to do away with point-and-click in favor of moving about the world freely. The point-and-click mechanic made sense back when 3D-rendered games  didn’t look that great, but especially in Obduction‘s case, when it does nothing to make the environments prettier, picking it seems masochistic. Roaming around the worlds of Obduction freely is not just more time efficient, it allows for more freedom. And in a game this gorgeous, freedom is everything.

Obduction‘s gameplay is largely the same as Myst‘s. Players walk (or sprint) around a big world looking for clues and pushing buttons. The player character can operate machinery and scour world spaces for keys and valuable items. Obduction does make some valuable improvements to the Myst formula, though, like highlighting important items with a distinctive glimmer, and allowing players to pick up and closely examine items just like in Gone Home. This is a far cry from Myst, which usually demanded lots of pixel hunting and looking for tiny objects with no clue as to their importance.

Obduction’s puzzles are also much more fun and better-designed than those in its predecessor. Old-school fans might take offense to that statement, but let’s be fair; the puzzles in Myst and Riven are difficult to the point of being impossible without a walkthrough. Riven in particular had some nasty, nasty conundrums that were both nonsensical in their logic and wasteful in time required to solve them. Myst III toned down the difficulty of the puzzles, Myst IV ramped it right back up, and Myst V just lost itself in nonsense about drawing on stone tablets.

Make no mistake, Obduction‘s puzzles are still quite difficult, but unlike Myst’s puzzles, they’re intuitive and run on common sense. Part of Myst‘s problem is that its puzzles require chance combinations of random items, or experimenting on an item in the world for hours hoping that the next combination would work. Obduction demands experimentation and meticulousness as well, but players won’t need to break their brains to reach that point. The key to successful puzzling in Obduction is paying attention to detail. There’s an in-game camera that allows players to take pictures of door codes and important journal entries, because this is a Cyan Worlds game, and all those locked doors aren’t going to open themselves.

The central plot of Obduction contains a lot of the same narrative threads that were in Myst. The player character has to solve a problem in the first world they arrive to, and have to visit additional planets in order to do that. The player learns that there’s more than one tree, and that the other trees are responsible for abducting members of alien races. These abductee communities have coexisted in a fragile peace for some time, but that peace broke down shortly before the player’s arrival. It’s up to the player to bend the trees of these other worlds to their will, much like the Stranger had to successfully navigate each Age in Myst in order to succeed on the titular island. Rather than visiting Ages, though, the worlds the player visits in Obduction are fully realized alien planets, accessed by cool-looking teleportation devices instead of magical books.

Even though Obduction has preserved the central notion of journeying between four worlds to solve a problem involving all of them, the game presents a streamlined, simple narrative to follow with just enough backstory. Another one of Myst‘s problems was that its central story got bogged down in some seriously convoluted lore. Obduction nixes lore in place of a show-don’t-tell vagueness akin to that of Half-Life 2, where the player is left to infer much of the backstory instead of being drowned in it by countless anecdotal journals. Obduction has much more of a sci-fi thriller feel to it than an ambient magical journey, which is good not only for reinforcing expediency in the plot, but also for reinforcing the notion of an inter-racial conflict between the abductee communities. It helps drive the game and add incentive for solving the puzzles. The mystery around every corner is surprisingly compelling, and the lack of abundant backstory only drives the player to play more.

Like most Cyan Worlds games, Obduction is an exceptionally beautiful title. Each of the four worlds that the player travels to is meticulously detailed and built on an inspiring scale. It’s clear that the world modelers at Cyan are still in touch with their inner children, because that exact sense of wonderment is what will greet players when they visit each planet. From the lush jungles of Maray to the titanic stone citadels of Kaptar, each planet contains more than a few things to drop the jaw at. At the least, Obduction is perhaps the prettiest game to come out so far this year. At best, it’s a shining continuation of the impossible dreamscapes Cyan pioneered in Myst.

Even though Cyan is impeccably talented at designing game worlds, the same cannot be said of their character design and programming. For some reason, the folks at Cyan Worlds decided to once again go with live-action characters transposed onto a video game background, and holy crap does it look flat. C.W. is acted out by Rand Miller’s younger brother Robyn (who also composed Obduction‘s score) and though he’s not a terrible actor, the transposition of a live-action shot onto a 3D world just looks awkward. He doesn’t look like a real person, he looks like a hologram. What few, actually rendered models the player encounters out in the world don’t look much better, though. The environments are where it’s at- the characters, not so much.

Far more impressive than Obduction‘s attempts at human characters is its atmospheric effects. The game relies on a diverse palette of lighting and an impressive assortment of atmospheric effects to make each world truly come alive.  This game is on the opposite end of the lighting scale from Watch Dogs, which featured a single shade of pale light that made everything look awful, and right next to Alien: Isolation, one of the best-lit video games in recent memory.

The sound design is also quite competent, with an array of animal and machinery effects accompanying every area, large and small. The soundtrack of Obduction is a significant departure from the Myst games, trading out Gregorian chant and delicate orchestral sounds in favor of a more contemporary guitar-and-synth-driven sountrack. Old-school Myst fans may not be huge fans of it, but it reinforces the game’s sci-fi theme and it’s quite well-composed. Let’s just say that Robyn Miller is a much better musician than actor. No offense, sir.

Plus, who doesn’t love lasers?

All in all, Obduction is a sterling video game that lovingly improves on what Myst pioneered in every way. Its puzzles are challenging, but not unfair. Its sci-fi narrative resurrects the essence of Myst without being too derivative. It contains gorgeous, imaginatively designed worlds that players can lose themselves in for hours (literally and figuratively). The game is refreshingly bug-free, which is becoming a rarity for PC gamers in this day and age, and it asserts that the conundrums and world-building of Myst are sorely needed in the modern age. Everyone, Myst fans and newcomers, should at least try Obduction. It doesn’t hit every note perfectly, but there’s no doubt that the ones it does are with both love and imagination.

You can buy Obduction here.