Explore a dark forest in a hilarious parody of the Slender Man.

It’s become apparent to me that the Slender Man motif has begun to take itself too seriously. The concept has been made manifest in dozens of projects in the few years since it appeared on the Creepypasta forums, always circulating around the same goddamn idea: a tall, pale guy with no face and a nice suit stalks you at a distance and kills you if you steal the coloring book scrawls he’s tacked onto trees.

The single unifying novelty of this idea is also its downfall, as there’s only so much that can be done before the concept feels stale. This is why the deluge of Slender Man games and projects has abruptly halted in the last 12 months or so. However, the Internet always provides a new use for worn-out motifs, and that use is Lost in a Forest.

Lost in a Forest is, to be a frank, a very stupid game. It’s one of those so-bad-it’s-good games that, like an Adam Sandler movie, gives you a few chuckles at the expense of way too many brain cells. Like its source material, Lost in a Forest is a first-person indie horror game in which you, a nameless protagonist, ends up in a pitch-black forest looking for some notebook pages. The premise is identical to that of the original Slender game I reviewed 30 months ago. You’re in the woods with nothing but a flashlight, and must collect some notebook pages before a supernatural entity murders you.

As you might have suspected by now, though, Lost in a Forest shakes things up. It spoofs the seriousness of Slender Man, and it does so by providing a horror comedy. Even the game’s title made me laugh, because it’s so true. Why are you always lost in a forest, and why are you always looking for notebook pages? 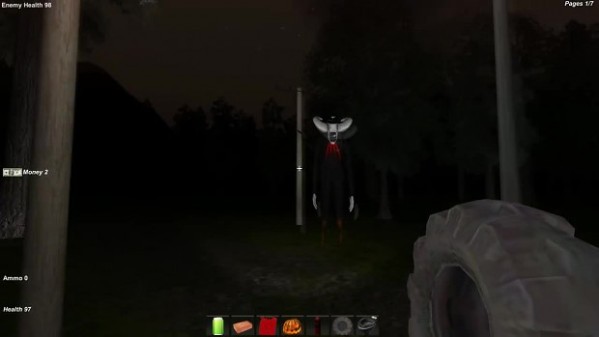 AAAAH! Wait… what is… haha… hahahaha….

Players of the original Slender and the countless derivatives it spawned will remember that as you collect each page in the woods, the Slender Man becomes more aggressive about hunting you down. Finding one page will net you the occasional glance of him in the woods, while five or more will have the damn thing breathing down your neck the whole time. What made Slender so agonizing was trying to resist the urge to look behind you as you walked through the woods. You had to balance knowing the danger’s location with suffering that knowledge’s very lethal consequences. It’s a creepy premise, and admittedly a brilliant formula for a horror game.

Lost in a Forest takes that same premise and throws a few wrenches into it. While walking through these very different woods, you’ll find yourself assailed by what I can only assume are the Slender Man’s inbred cousins. Gaunt vampires with weird smiley faces, anthropomorphic camels in suits, and bat-eared maniacs are only a few of the crazies that stalk you through the forest. But, for the first, time, you can fight back. Random objects scattered throughout the woods can be collected and thrown at the Slender Men to kill them. Yep. You read that right. If you’ve ever had fantasies of taking the Slender Man and beating his invincible ass up with a giant dildo, Lost in a Forest is the game for you.

Cats, Jack-O-Lanterns, fire hydrants, tires, bricks, bags of potatoes, everything at your disposal to fight the Slender menace.

You still have to explore the forest. You still have to get those damn pages. But you can chuck rotten pumpkins and old bricks at the Slender Man and hear him tumble to the ground with funny sound effects. Each Slendy-buddy drops money when they’re killed, allowing you to buy upgrades and health packs at scattered vending machines. More Slenders will pop up with every page you collect, but I had a hilarious time felling these lucid bastards with stray cats and whatever else could be lobbed at them.

Lost in a Forest is also peppered with random sound effects to further the ridiculousness. You’re clearly in a temperate forest at night, but you’ll hear jungle noises, distant laughter, cat meows, and other effects that aren’t quite so disarming as those found in the Slender game. Lost in a Forest carries itself with the weight of a proper parody. It’s not off-the-charts ridiculous like Jazzpunk, but it strikes a nice balance between absurdity and subtlety. The game still provides a few scares, like when the Slendies pop up right in front of you, but it’s nothing a well-aimed potato can’t bring to heel. The distinction of subtle humor is important, because it would be too obvious to feature a Slender Man game where he just turns into confetti when you look at him, or have to fight him during the day. No. Lost in a Forest takes what we wish we could do against Slender Man and funnies it up a bit.

I appreciate that some developer found a way to satirize an otherwise terrifying concept, but the execution of that idea leaves a lot to be desired. Just like yesterday’s game, Shady Casket, Lost in a Forest is a bit too dark. It’s not holy-shit-where-am-I dark, otherwise known as Shady Casket-dark, but it’s still pretty goddamn dark. Turning up the gamma only did so much, as you can see from these screenshots.

Additionally, the map is too big. You’ll spend upwards of a half-hour wandering around the woods looking for those pages. There are no paths to follow and the signs, perhaps in an attempt at humor, do not lead to the landmarks you need to visit. I didn’t care; if the game wasn’t going to take itself seriously, neither was I, but someone looking to actually finish this might get frustrated. Then again, I don’t think actually trying to finish Lost in a Forest is the actual point of Lost in a Forest.

Lost in a Forest has a difficulty ramp all its own. You have a health meter, unusual for a Slender game, and it will get taken down the longer one of the lanky bastards glares at you. You must immediately throw your hard-won items at them, or risk having to start all over again. Typically, this process is not difficult, but when multiple Slendies are staring at you with their damage stacking on your life bar? Yeah.. not a great design element.

In short, Lost in a Forest has a lot of cheap laughs and cheap thrills, available on Steam for two bucks. I got it for fifty cents and still had some fun toying around with it. It’s not a must-own for horror fans out there, but it’s the only successful attempt I’ve ever seen to make the Slender Man funny. And that, ladies and gentlemen, is a true novelty.

You can buy Lost in a Forest here.