Continue the search for Philip’s father in a hellish underground laboratory.

As a general rule, the video games that declare themselves the first episode of a series tend to do very poorly. Hydrophobia and that god-awful Ride to Hell game are prominent examples. Usually, this is because you either aren’t Telltale Games, or because material fit for one game is sliced into several smaller, weaker installments. Frictional Games understood that the key to good episodic gaming is to give each episode its own unique theme and challenges, while using an overarching narrative to string them together into a better whole. Hence the kickassery of Penumbra: Overture and now, to a greater extent, Penumbra: Black Plague.

Black Plague continues the story of Philip, a British physicist who received a letter from his supposed-to-be-dead dad at the beginning of Penumbra: Overture, and tracked its origin to uninhabited northern Greenland. In Overture, Philip braved an abandoned mining facility full of horrifically mutated creatures.

Black Plague begins after [SPOILER REDACTED], as Philip regains consciousness in a secret science facility beneath the mine.

Philip can hear screams and fighting outside his cell, and so breaks out to find his dad and figure out what the hell this place is. The lab is run by a clandestine organization of scientists, but their connection to the events of Overture and Philip’s father remains unclear.

With all the commotion, I began to worry that whatever infection had seized the wolves, worms and bugs in Penumbra: Overture had spread here as well. I spent the first twenty minutes or so hearing strange growls and catching glimpses of gray things sprinting past doors, but I turned a corner and found that it was just a happy little leprechaun playing tricks on everyone and offering me a rainbow home to safety.

Just kidding. It was a chicken-fried zombie monster.

Yup. Most of the base’s human staff has succumbed to the same mysterious disease that turned the animal enemies in Overture into giant, tumor-ridden monstrosities. These creatures are fast, smart and thorough. As with Overture, there are no weapons to be found, so Philip can only run and hide to survive the creatures hunting him.

Unlike most horror games featuring an insidious disease, the protagonist is not magically immune to the chaos around him. He succumbs to the plague himself, but rather than transform into a drooling freak, he begins to hear a maddening voice in his head, some sort of nebulous intelligence that is not at all friendly. Sounding somewhat like a cantankerous old man with a 13-year-old’s sense of humor, the voice takes the title of “guardian angel” as a sick joke, even calling itself Clarence after the character from It’s a Wonderful Life.

Clarence is an asshole. There’s no other way to put it. When he’s not rooting around in your brain making fun of embarrassing memories, this ethereal consciousness is telling you to turn around and that your mission to find your dad is hopeless. I was beginning to believe him, until getting a video chat message from a surviving scientist who promised she could cure Philip and help find his dad. With time running about before he too transforms into a mutant, Philip steadies himself and sets out to find this mystery lady. Clarence is not into this idea though, and will alter your perception of the game world to keep you and her as far apart as possible. He’ll make it seem as though doors have vanished, corridors have ended, even that you’ve died horribly. DAMN you, Clarence.

Black Plague‘s narrative is quite more panicked and feverish then that of Overture. Though Philip’s mission to find his father remains largely unchanged, his problems have become compounded by an impending date with horrific mutation, which I’m sure would ruin just about anyone’s day. Philip remains a silent protagonist, but Clarence more than fills the space with his potty mouth and cynical musings about the stupidity of human beings. The game introduces a few other characters, almost none of whom are physically seen, reinforcing the sense of isolation. 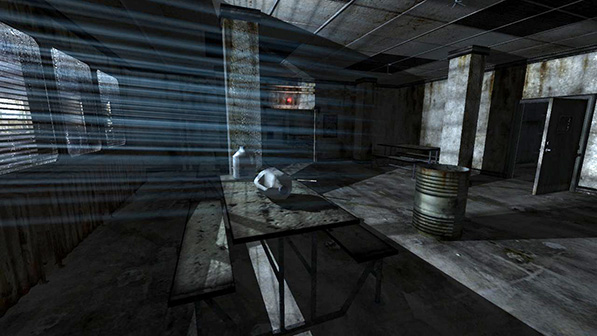 Black Plague‘s narrative is supported by a series of silent observations about humanity’s pitfalls. To Clarence’s credit, his musings about how mankind can do the worst of things with the best intentions are reinforced by the havoc of the facility. Experiments gone awry, innocent lives sacrificed, all in the name of a progress that was never made manifest. If Clarence’s constant cynicism wasn’t enough of a reminder, the game’s scenarios and puzzles certainly were.

Though the story of Black Plague is bleak, to say the least, it is quite exciting. Whereas the main goal in Overture was simply to survive and press forward, Philip’s dad being so close made the game more compelling. You’ve almost solved the mystery of why Philip’s father apparently faked his death, and perhaps more curiously, his connection with both the secret organization running this lab, and the force that’s turning everyone into salivating meat beings.

Black Plague carries on with the well-written and oftentimes poetic dialogue seen in the first Penumbra and the later Amnesia games. Though annoying, Clarence’s quips about everything from bathroom humor to human existence were both hilarious and deep. Black Plague is terrifying, but the game is not without a measure of humor similar in flavor to that of Portal or Fallout 3. Ludicrous loudspeaker announcements about the “perks” of suicide, convoluted policies regarding employee safety, even a few jabs at Microsoft. This game will make you scream, but it also made me laugh.

I salute Black Plague for managing to throw in a few chuckles while keeping the game’s overall tone dark and hopeless, and how psychotic do I have to be to salute THAT???

Black Plague‘s gameplay can be summed up by the phrase Run. Solve. Cry. Philip has no weapons or means of self-defense. The clunky pickaxe-swinging combat from Overture has been taken out of Black Plague, leaving you without even a poorly-executed smidgen of hope for fighting back. You’ll occasionally find first aid and other supplies for staying alive, but your best hope of perseverance is to run and hide, lest the monsters make short work of you.

Philip has a flashlight for seeing in the dark, but its batteries run down quickly and it lights you up like a Christmas tree. You have a glowstick for backup illumination, but a criticism I wish to apply to Black Plague and retroactively to Overture is that it never runs down, so the challenge of navigating an area before it becomes pitch black is rendered moot. It wouldn’t be such a flaw if the glowstick sucked, but it’s just as powerful as the flashlight. Part of what makes horror horror is the lack of resources, and Black Plague‘s glowstick made this suffer.

It wasn’t until after I ran out of batteries that I tried the glowstick and found that it never ran out.

The monsters in Black Plague are smart, terrifying and armed to the teeth. The game’s main antagonists are human mutants, who stalk the halls sniffing for your blood. If things weren’t unfair enough, these beasties carry weapons and flashlights. I cried out in fear when a monster shined his flashlight on me, leaving me with nowhere to hide and a delicious new sensation of challenge. Monsters with flashlights means that you can only hide until being flushed out, and must run. This made the enemies of Black Plague an exceptional challenge. However, there’s only one kind of foe, making enemy navigation very predictable. You do get into a sort of boss fight with one of the mutant animals from Overture, but that’s about it. I feel like an opportunity was missed to have creatures break into the base, turning this game into even more of a shitfest.

The puzzles core to Frictional Games’ horror titles return in Black Plague. Most of them are quite intuitive but a few made me roll my eyes. There was one part toward the beginning where I spent an hour trying to figure out how to turn off a steam jet, only to learn from an FAQ that you have to press a random soda can against a freezer thermostat to turn off the steam. I feel no shame in looking that one up, that’s just ridiculous and random. Good puzzles are good puzzles because they reward logic and intuition, not rubbing random objects together and hoping for progress. This was an issue with a few other puzzles in Black Plague but, thankfully, not the majority.

Excuse me? I need to light a can of congealed feces on fire in order to spark a generator and break a lock on a door, can you help me out?

Black Plague‘s visuals received a healthy graphical update from Overture, and the complete switch of palette from creepy mine to scary underground lab was a nice change of pace. Creepiness oozes from every inch of woodwork in Black Plague. You’ll find laboratories full of questionable experiments, constant signs of calamity, and coldly beautiful underground and surface scenery.

I do have one major and quite random sticking point with the game’s visuals, specifically the monster design. I’ve seen some awkward artwork in my time, but for some reason, Frictional designed the monsters to make it look like their schlongs are burrowing up into their stomachs. Either that or the small intestine has fallen out and become some sort of substitute penis. What is the line of logic behind this design choice? All it did was make me awkwardly laugh and then squint in confusion.

See? What the hell is that supposed to be?

Despite some embarrassing artistic quandaries and a couple of puzzles that might make you tear your hair out, Penumbra: Black Plague is a competent horror game. It is an improvement in many ways over Overture, and its atmosphere is extremely chilling.

The combination of Philip’s race against time with the staggering implications of everything he sees and everywhere he goes is very effective. Add a bit of black humor and some challenging puzzles, and you’ve got something of a gem.