Lead a survivor’s colony through a brutal zombie apocalypse.

There’s no denying that zombie media have captivated the nation. From the horror-drama of AMC’s The Walking Dead to the countless novels and films that have sprung up in recent years, you’d think that the American populace is yearning for the apocalypse. With that in mind, I decided to delve back into the dark horror games that I love, with a new game that follows a group of zombie survivors. It brings its own twist on what has become a cliche motif, as well as some good and bad qualities to the table.

State of Decay has no central protagonist. You start out as sports store clerk Marcus Campbell, but can switch between various characters once you get to know them well enough. As long as your party of people has at least one person in it, you can keep playing, even if Marcus dies. Cool and convenient as this feature is, each character might as well be one avatar for all the character depth afforded them.

Even from the get-go, as Marcus and his friend Ed dash out of a zombie-sieged national park, the writing in this game is just bad. It really is. The script is riddled with so many cliches you’ll marvel that there was any room left for the actual text. Characters that I rescued from landfills and burnt-down houses told the most ridiculous, awkwardly written stories that it broke all suspense of disbelief. This may have been the trauma talking, but one guy I rescued from an overrun McDonald’s told me that his girlfriend used to tie him to mattresses for even speaking to other women. Awkward.

The characters in this game are shallow. A few lines and a different skin are all that differentiate them.

The game’s plot is less a plot and more my arch-nemesis, a MMORPG. Marcus and company can piddle around in a few dozen shallow, extremely easy missions, or you can engage in what makes this game addictively fun: finding shelter, managing your survivors, rescuing new people and scavenging abandoned buildings for toilet paper and Cheerios. After engaging in a few short, meandering plot missions, I spent most of my time cartwheeling into buildings and painting zombie intestines all over a taxi I stole from the gun shop.

Managing a refuge from the apocalypse is streamlined with an all-in-one menu inside your walkie-talkie. After selecting a new base, you can build infirmaries, bunk beds, gardens and other facilities within your grounds, and jack it up with barbed wire and guard towers. Supplies are retrieved from a central safe that anyone can access. Each character also has his or her special skills, though I couldn’t help but notice that all of my Hispanic characters specialized in gardening. Apparently Hispanic people are inherently more able to sustain themselves in apocalyptic environments.

Most of State of Decay‘s gameplay is geared toward breaking into buildings and taking the loads of stuff within. Everything you do, though, generates a soundwave that can attract the walkers. Lockpicking doors and stabbing zombies with knives is generally safer than smashing through a window and machine-gunning a picture of yourself into the linoleum. Once you’ve grabbed the loot, you must haul ass back to base with the goods and add them to the resource pool, which is excised from at the end of each day and night cycle. Combat is an uncomplicated button mashing that will create body piles at the expense of the tendons in your thumb, but who needs opposable digits?

State of Decay also revolves around making tough calls. You must maintain relations with other groups and aim either for peace or their heads, as the situation warrants. Some groups are flat-out douchebags, but a few will trade supplies with you. The necessity for trade is somewhat numbed by the absolute crap tons of items you’ll find in houses, though. Some of your own survivors will turn out to be jerks or saints, and you have options for dealing with them. I immediately banished one dubious asshole after he shot a nice lady for no apparent reason. I then shot him in the head (which doesn’t register as murder because he was outside the sanctuary walls and therefore a stranger. GAME LIFE HACK :D). 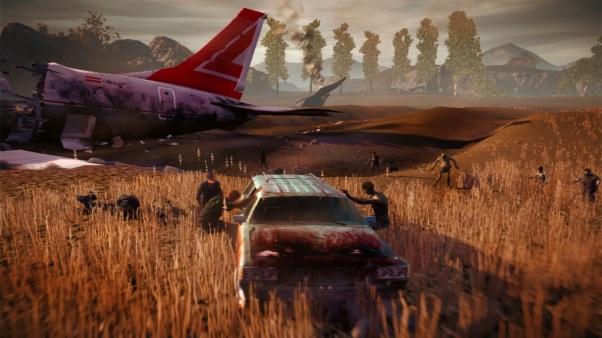 Salvaging is dangerous but will almost always get you the stuff you need.

You might be sensing some inconsistencies within State of Decay, and at this point, unfortunately, there are lots of them. I played the Xbox 360 version a few months ago and even then there were numerous glitches and bugs. My characters tended to get stuck inside walls and trees. I got word of a horde attack when a cow stared at my base the wrong way.

Perhaps most interesting of all, any car that you have parked at your base for at least a day will spawn back in its spot upon dawn or dusk, no matter where it is. This can turn out to be either an incredible blessing or a death sentence, depending on whether you’re actually in the car when it teleports.

But despite all these problems and an amateur plot covered in the open wounds that are inconsistencies and shallow characters, State of Decay is damn, damn, damn good. The challenge of constantly maintaining a base of survivors more than makes up for the lackluster story. That may not sit well with people who expect no less than Dear Esther levels of storytelling, but State of Decay is one of those cases where something besides plot is fun enough to make up for said plot.

Few things make you feel more badass than breaking into a gun shop and stealing into the night with your loot, with a few headshots fired off, no less! 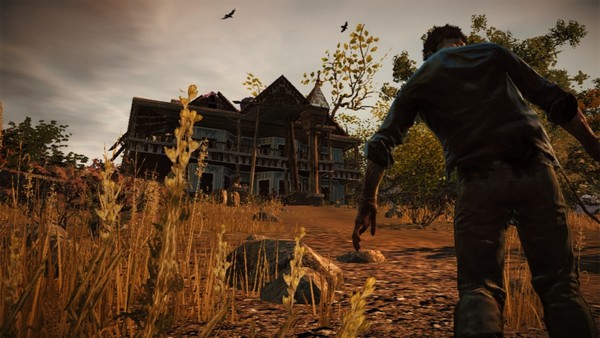 Trumbull Valley is still pretty even though the world’s ending.

State of Decay‘s graphics are medicore and the character animations are stiff, the latter of which made it hard to tell my survivors apart from zombies. This doesn’t stop the visuals from painting a very pretty picture though. The open world to which I’ve referred numerous times is a vast rural valley, composed of three towns and numerous industrial and farming sites. All of these areas are open to looting and living in. The artwork is of a farming community in the fall, which is both beautiful and somehow quite suited for a zombie apocalypse.

Though the environments are well-designed, a few of them felt quite repetitive. Each of the three towns you can visit are basically the same town facing a different direction and with a different “Welcome to” sign at the entrance. I found myself not caring as much as I would about that, though, because houses are where people live and people USE THINGS I CAN HAZ ROB. The music is a melancholy acoustic track not unlike The Walking Dead, but its subtle enough that it won’t get stuck in your head as you’re robbing and shooting your way around the valley.

You can spend hours tearing around this huge environment. I recommend using your vehicle to grind up the zeds.

I give State of Decay a full recommendation based not on its story but on its beautiful environments and simple, fun gameplay. Zombie fans in particular will enjoy the relatively rare feature that is maintaining a whole group of survivors, and the game is not very scary. Trust me. The focus is on action and developing a community.

As a friendly warning, though, this game will suck you in. The biggest consumer poll of this game going around the Internet right now is called, fittingly, “It’s a quarter to three”.

You can buy State of Decay here.