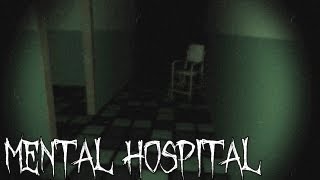 Escape from a creepy asylum with your sanity intact

There are many heinous things in this world. Crime, poverty, Ke$ha. But for the second installment of Short Horror Week, I endured an ordeal that pushed me to the limits of my sanity (Call of Duty multiplayer? Good guess, but no). Short Horror #2 is the aptly named Mental Hospital.

The Story
.
As with yesterday’s horror game, The Briefcase, Mental Hospital strikes a minimalist tone. You are once again a nameless protagonist, and your goal is to escape a pitch-black mental asylum that is almost overloaded with jumpscares. The game is a 15-minute crusade into what it’s like to have an adrenaline spike every 10 seconds or so.
.

If it could talk, Mental Hospital‘s atmosphere would say, “I will kill you if you so much as breathe the wrong way”. The entire hospital is pitch dark and can only be viewed with a flickering flashlight. There really isn’t a story to this game. It’s basically a progression of monsters and jumpscares that’s linear in some places and exploration-driven in others. Headless dolls, self-propelled gurneys, and bloody wall messages like the one up above are just a handful of the oh-so-pleasant spectacles that await intrepid explorers.
.
Luckily, you have a gun! Hooray! But it only has three bullets, so the euphoria of finding a weapon fades pretty quickly. The scares and surprises became more intense the further I went, but the game’s pacing becomes pretty predictable and jumpscares happen at regular intervals, giving me ample opportunity to prepare for the next heart attack. While the scares do become more predictable, the game’s designer, Andrew Resyaev, was kind enough to make them terrifying. Watch out!
.
The Art
. 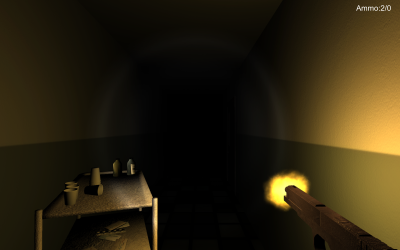 I kind of touched on the artwork already, but there’s an important element to it that I feel merits pointing out: I actually felt like I was in a cold, dark, abandoned hospital. A lot of games and movies can certainly pull off creepy if they want, but the faint echoes, screams for help, and blank walls closed in on me as if I were in an actual asylum. As one might expect, this all put me a big step closer to soiled pants. Because it’s an indie game, the environments and objects aren’t that detailed, but the atmosphere more than compensates for any deficiency in visuals.

Should I get it?
I don’t know if any sane person would recommend this game, but what the hell; although I was terrified while playing it, I enjoyed the experience. At the end of the day, it’s a shameless adrenaline rush, and if you’re into that sort of thing, I’d get this game. It’s a freebie, just like The Briefcase, and took about 15 minutes for me to finish. Download and enjoy. Props to Andrew Resyaev for this project; I’m sure he’s working on other creepy stuff. The game has a subtitle: Eastern Bloc, implying that this is either the first of a series of episodes or a beta. Either way, it’s worth the download. Let me know if you have an indie horror game that you feel should make this list!
.
Download Mental Hospital