The world has been shattered. Find a way to put it back together.

A good fairy tale has poignancy bubbling beneath its colorful aesthetic, and Bastion is no exception. When Supergiant Games’ debut title shipped in 2011, it received acclaim for aptly combining colorful illustrations with a surprisingly deep narrative. Traditional fables and fairy tales that accomplish that combination are often remembered long after publication, and Bastion‘s enduring popularity is probably due to it having accomplished that goal as well. What else, if anything, does this beloved game have going for it?

Bastion is an isometric adventure game set in the magical world of Caelondia. The Kid, Bastion‘s star and player character, wakes up in the aftermath of an apocalyptic event called the Calamity. The once shining and prosperous Caelondia has been shattered into a thousand floating pieces, and the Kid needs to find his way out of the ruins and to safety. No one’s to say what or who caused the Calamity, but before long the Kid stumbles upon the game’s titular Bastion. According to legend, the Bastion has the ability to rewind time… provided that the Kid can find its missing power cores.

The Kid decides to set out in search of the cores so that he can rewind time and undo the Calamity. He’s aided in his quest by Rucks, an old man who also serves as the game’s gravelly voiced narrator, and a handful of other survivors secreted throughout the post-apocalyptic landscape. Finding the cores isn’t as simple as traveling from island to island, though; each level in Bastion is crawling with strange ghouls and legendary beasts. The Kid will have to fight through all of them to snatch the cores and power up the Bastion. 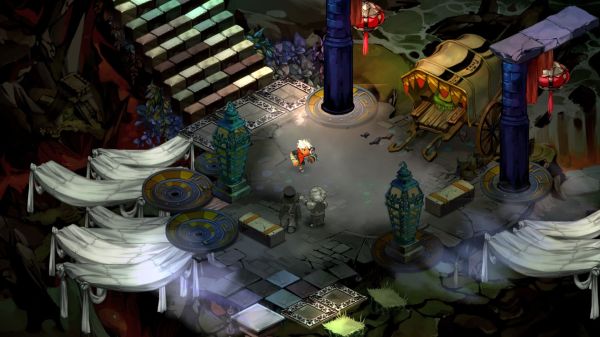 Players can engage these foes with a wide variety of melee and ranged weapons found throughout the ruins of Caelondia. The Kid starts the party out with a large hammer and a repeater rifle, but players can also find swords, bows, pistols, and other killing implements later on in the game. Combat in Bastion is pretty simple, just hit or shoot at the enemy until their health expires and they vanish into the ether. It’s usually easy to tease an attack out of an enemy and then counter-strike. The Kid can drink health tonics if he gets too roughed up and black tonics to charge up special attacks.

The Kid has a few other options for rounding out his combat abilities. Players can find chunks of material out in the wilds useful for upgrading weapons and can drink buff-granting alcoholic beverages at the local watering hole. Players who are feeling extra adventurous can activate strange idols that make the game harder but that also grant extra experience points. The Kid can access all of this stuff by using cores to upgrade the Bastion’s facilities and pay for it using crystal fragments dropped by enemies. It’s fun to come back to the Bastion after a hard level’s adventuring and rebuild it piece by piece.

Oh we’re putting in the distillery. No question.

Bastion‘s gameplay is fun, if a bit simplistic. Despite the game’s admirable variety in level design, the Kid’s penchant for combat remains relatively unexplored beyond just slicing and shooting at foes. The Kid can level up, but the benefits of doing so are limited just to carrying more health potions and picking a few added benefits from each of the Bastion’s buildings. There was definitely some potential for Supergiant to add more depth to the Kid; having class-esque warrior or mage skill trees would’ve been a perfect fit for this fairy apocalypse.

All of that said, Bastion does a good job keeping its levels wild and its enemies unpredictable. The Kid will find a random assortment of enemies, bosses, and environmental hazards in each level, so even if the combat is a bit shallow, the rhythm of in-game battles changes constantly. One level might have its boss fight at the very beginning followed by a slog through smaller foes afterward. Another might end up being a very short level in which the Kid has to run along a falling island. Each level is different, which helps keep players wondering what excitement is around the corner.

A wild gasbag appeared! It used chili farts! It hurt itself in its confusion!

Varied level design and enemy assortments aren’t all that Bastion‘s world has going for it. The game is one of the most beautifully illustrated titles of the decade. Each level is bursting with color and delicately drawn object details that range from crumbling masonry to thousand-color pockets of wilderness. Bastion is packed with thousands of objects and decorations in its levels, while paintings of forests and valleys make for beautiful backdrops. It’s a beautiful game that renders notions of the apocalypse always being bleak incorrect.

Bastion‘s mastery with color is accompanied by fluid character animations. Though the Kid could stand to move a little faster, his and the other characters’ animations are sound. Enemies are drawn in a similar fashion, looking more like living paintings than anything else. These animations aptly combine with the aforementioned visuals to make Bastion‘s world glow with life. Even if players somehow tire of Bastion‘s gameplay, they won’t be hurting for pretty things to look at.

Bastion doesn’t stop the buck at producing amazing visual art, as its soundtrack is also quite lovely. In many ways the game’s OST is reminiscent of Braid, with lots of quick little violins and thoughtful acoustic guitars. Occasionally the game includes more somber music, particularly toward the end. Bastion also brings high-quality sound design to the table; everything, even the Kid’s footsteps on gravel, were recorded with rich detail. Bastion‘s acute attention to good sound design makes the game come alive that much more (just listening to the Kid sort through booze bottles is relaxing. Clink, clink, clink).

Bastion‘s single voice acting performance comes from Logan Cunningham, who channels a Sam Elliott-esque air in narrating the Kid’s journey. The narrator chips in at a regular clip throughout nearly all of Bastion’s levels, providing backstory on the regions the Kid visits and insights into what the silent protagonist is thinking. Cunningham’s performance is up there with Kevan Brighting’s narration in The Stanley Parable as one of the most masterful game narrator performances in recent years. He’s instantly likable in Bastion as a character who ponders (and dispenses barbed wit) like an old man.

Bastion‘s narrative relies on a time-old, show-don’t-tell setup that prefers to focus on the Kid and his companions; Caelondia already has plenty of screentime through its beautiful visuals. The narrator dispenses details about the Calamity in crisp, concise sound bites that focus on what the world used to be instead of just what it’s become post-disaster. Because the Kid doesn’t talk, the narrator’s guidance through the world of Caelondia is usually the player’s only direct source of information. Players interested in more exposition can learn about characters’ pasts by partaking in combat challenges. Kind of a random way to learn more story, but it’s interesting stuff.

Bastion, like the best old fairy tales mentioned earlier, aptly shifts between warm and dark tones in its storytelling. It delivers humor and heart in all the right places, but as the Kid gets closer to restoring the Bastion, he learns some uncomfortable truths about the Calamity that grind his efforts to a halt. Players have to make some tough choices in finishing the Bastion and deciding what to do with it once the mythical fortress is restored. The game resonates with heartfelt emotions that, much like a good fable, climax with just a touch of somberness.

How did this happen?

Bastion‘s story is also comparable to a Pixar film in that it can be appreciated by players of all ages. The game’s worth considering for gamers who have children, as it’s relatively simple to pick up and play through together. Bastion has the outer sense of adventure that young gamers love, but its narrative has mature undertones that older players will appreciate. That versatility is surprisingly absent in game media these days, but it underscores Bastion‘s visual and narrative charm.

Bastion‘s limited options menu is less charming than it is, well, limited, but at least the game runs well. Despite not leaving players with that many options in the event of a performance issue, the game’s hand-drawn visuals are not taxing. Bastion runs as well on a monster rig as it does an old Microsoft laptop, and it also pairs well with a gamepad. Between being almost six years old and doing away with attempts at hyper-polygonal realism, Bastion is a safe bet for players who are anxious about performance problems.

Go forth and be awesome.

Bastion is one of the best isometric adventure games ever made. The game masterfully combines stunning artwork and quality writing with fun gameplay. Even if that gameplay runs the risk of being simplistic, this is compensated for by Bastion‘s varied level and enemy design. This is a game that fans of every genre should buy and try as soon as possible, especially with Supergiant’s latest project, Pyre, just around the corner. Bastion is one of those games whose emotions and world will stick with gamers years after the fact… just like a good fairy tale.

You can buy Bastion here.