Discover the whereabouts of three missing people and why they vanished.

What is it about murder mysteries that makes them so enticing? On the surface, a story about how and why somebody died doesn’t seem like fun fare… and yet those detective narratives (both fiction and non-fiction) are some of the most popular media around. Perhaps it’s the suspense of wondering where the victim went and why? Maybe it’s the challenge of figuring out why someone went missing or the motive driving the killer? Video games have taken to questions like these with gusto, but no game, TV show or movie presents a spin on the genre quite like Stairs.

Stairs is a terrifying plunge into survival and psychological horror created by GreyLight Entertainment, a Swedish indie developer. Players assume the role of Christopher Adams, a struggling freelance journalist who has spent the last few years investigating the disappearances of three people. Adams’ search has been pretty fruitless, but he gets an anonymous tip that one of the trio’s corpses was recently discovered at an abandoned factory. Stairs begins as he sets out for that factory and to write story that will get him back on his feet.

Adams finds the factory easily enough, but there he also discovers that the victim’s body has been moved. The hatch into the basement seems to be open though, and he takes a flight of stairs (hey) into a strange subbasement. From there, Adams quickly discovers that his vaunted story of the year is more horrifying than he anticipated and that he’ll be lucky if he escapes with his life. Perhaps some stories, Adams quickly learns, are best left unreported. 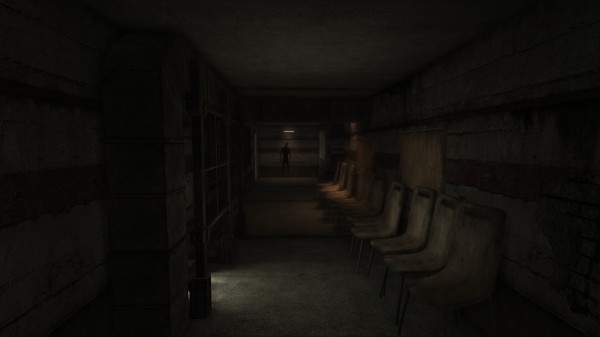 In typical survival horror game fashion, Adams has no weapons or tools to defend himself against the horrors lurking downstairs. He only has his camera, which is the player’s means of photographing phenomena and unlocking notes in his journal. Mysteriously enough, the camera has the power to unlock doors and even create doorways in certain places, giving Adams more flexibility to elude enemies and find clues. Barring that, Adams can only run, crouch, and pray.

The world of Stairs is not a pleasant place. Adams visits three different environments over the course of the game, and though each has its own nuances, they all share the same grim atmosphere. Most of the game focuses on psychological horror rather than in-your-face monster chases, but hardcore horror fans take note: there are plenty of monsters in this game as well. When players aren’t too busy eluding creatures or jumping at the sound of something moving around the next corner, they’re solving puzzles to get further down the rabbit hole. 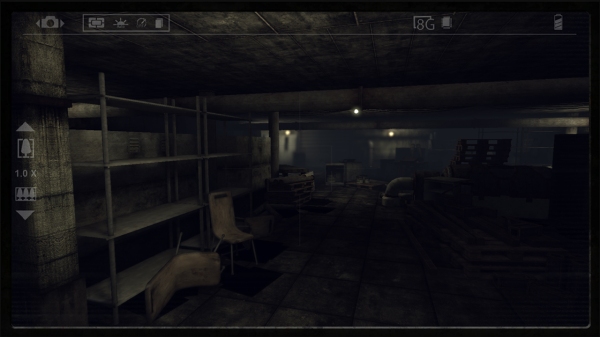 The indie horror world is infamous for producing cheap jumpscares, but Stairs has more faith in its audience than to simply pepper its levels with jack-in-the-box parlor tricks. The game has a great sense of pacing, content to let players wander through the world and for the tension to build organically. Stairs does feature little scares and puzzling sights here and there, but they’re subtle. A can rolling across a distant doorway or the sound of something crashing around the next corner is not as up-front as a jumpscare, but it percolates in the back of the player’s head. It’s far more unsettling to keep hints at horror peripheral. These scares also pair well with Stairs‘ intricate level design.

None of this, though, is to say that Stairs is without much more visceral moments. The monsters in this game are deeply unsettling… not just because of their appearance, but also because of the circumstances under which Adams find them. Sometimes they prefer to stay hidden or on the very edge of the player’s vision, which in many ways is more terrifying than when they actually break cover and pursue Adams. Nothing begs being stealthy more than a hive of sleeping creatures or seeing black-cloaked figures move between misty trees.

Can you see it?

The monsters in Stairs are consistently creepy, but the puzzles that players solve between encounters are not consistently, well, good. The folks over at GreyLight are huge fans of number and letter code puzzles—to the point where they form the bulk of riddles within Stairs. Though not a bad type of puzzle per se, clues as to the numbers’ whereabouts can be a bit too vague.

Additionally, Stairs challenges players to solve a myriad of obtuse symbol puzzles toward the end of the game. These puzzles are out of character with the rest of the game’s slow-burning investigating and don’t even really make that much sense within the context of the story. It’s a bit of a leap to go from creeping around looking at notes to pressing on glowing runes and following floating lights around. They’re not all that difficult to figure out, but players will have a hard time looking at them without wondering why they’re there.

Stairs‘ atmosphere exudes pure dread thanks to a combination of gorgeous visuals and minimalist sound design. The former is a collection of bleak, dreary environments built in the Unreal engine that range from dirty factory basements to abandoned mine shafts. All of these environments rely on a palette of muted colors to convey a sense of morbid lifelessness, as well as dim lighting that is only just bright enough to illuminate the game world. Some object textures look a bit blurry, but Stairs excels at believable object placement. The sense of chaotic clutter makes Stairs‘ world seem real.

Stairs‘ sound design proves that games can benefit from a relative lack of audio. The game has little music, but it’s unmistakable: a mournful piano melody layered over a foundation of quiet strings. More than that, though, the ambient sounds in Stairs are kept to a minimum to leave the player only with the sounds of their own footsteps. Some areas have a bit of ambient noise running in the background, but others are starkly silent… and that silence is deafening. The lack of ambient noise makes Stairs more terrifying, because every footstep sounds far too loud and it reinforces the feeling that something scary will pop out at any moment.

The sound design in the world of Stairs is rock-solid… except for the voice acting. Adams is voiced by a guy who’s trying to do an American accent and a Batman voice at the exact same time, and the result is… less than unfunny. It’s clear that the voice actor’s going for some kind of tough guy crescendo, but the strain put into making his voice that low is painfully audible. The other voice acting, especially that of a terrified victim found early in the game, is much more palatable.

Stairs‘ lack of eloquence with dialogue digs deeper than the voice acting. The game’s written documents and signage are riddled with spelling and grammar errors. As mentioned in previous reviews, there’s absolutely nothing wrong with English not being a dev’s first language… but that doesn’t mean a game marketed to English speakers gets the same pass for grammar errors. Besides, in this age of being able to Google anything, there’s really no excuse for having lots of misspelled words. Ruins immersion like nobody’s business. 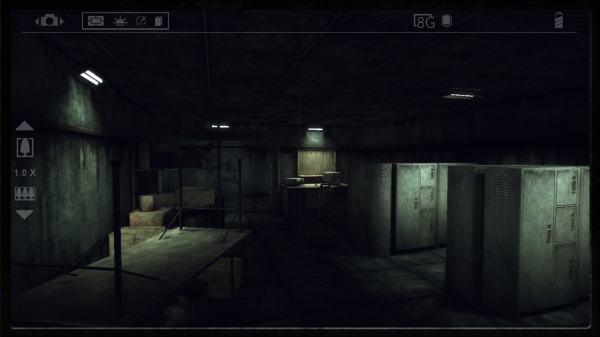 Despite inconsistencies with its voice acting and its written exposition, Stairs gets props for presenting a unique take on the murder mystery genre. It’s difficult to go into detail without throwing out spoilers, but suffice it to say that Adams’ tourney through hell has more to do with his being a journalist than he might think. The game presents a few interesting ideas simmering beneath its blood-soaked surface: what happens when someone paints a false portrait of another person? How does that affect another human being’s life? These and other questions form the philosophical core of Stairs.

Stairs also succeeds at keeping this central narrative core vague, but not so vague that it’s unknowable. The game relies on a lot of Half Life 2-style show-don’t-tell for its main narrative and backstory exposition. For any of the challenges afforded by Stairs‘ inconsistent puzzle design and hokey voice acting, the game does a good job of wrapping an overlooked question about truth and consequences in a masterful array of level design and pure horror. In fact, Stairs is second only to Soma as 2015’s masterwork of psychological and survival terror.

What does Adams have to do with all of this?

Stairs is worth picking up for hours’ worth of terrifying scares and probing psychological fare that both prevent falling asleep at night. The game runs well, has a decent options menu, and is a gem in a genre overloaded with cheap scares and incoherent narratives. The spelling and puzzle design irregularities won’t suit all tastes, but Stairs punches through these problems with acute level design and a horror atmosphere so thick that it can be cut with a knife. Pick it up and embark upon a murder mystery that poses some novel (and unsettling) questions.

You can buy Stairs here.