Prevent a sadistic Soviet general from destroying the United States.

This weekend’s back-to-back Call of Duty review series (much like the games themselves) continues its inexorable march toward a full-blown identity crisis. What have we learned thus far from reviewing these games? All Russians and brown people hate America, getting into a helicopter is a death sentence, and anyone who hates ‘Murica is objectively evil. Simple as that. Of course, this information was front and center in previous Call of Duty reviews, so why another one? Why a review of Call of Duty: Black Ops? Because it’s actually a pretty good game. In fact, it may be the best Call of Duty game ever made.

Released in the fall of 2010, Call of Duty: Black Ops is a military first-person shooter set during the Cold War. The game was developed by Treyarch (the studio keeping Call of Duty alive these days) as an indirect follow-up to 2008’s Call of Duty: World at War. Though the two games are set in the same timeline and feature similar first-person gunplay, Black Ops trades out World at War‘s raging battlefields for furtive covert operations and a grittier, more personal storyline.

Black Ops‘ narrative is told in medias res and begins with a CIA operative named Alex Mason getting strapped into a chair and interrogated by two shadowy figures. Mason’s captors believe that he knows about an upcoming Soviet attack, and though he swears innocence, he agrees to retrace his steps with the interrogators. Mason’s flashbacks comprise the main story of Black Ops, and as players progress through the story, he’ll chime in with his thoughts and opinions on how things went down. 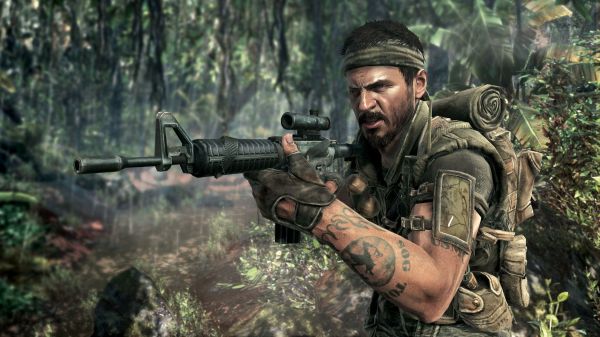 Black Ops takes place during the 1960’s, a decade when the Cold War was really not all that cold. The game marks several significant changes from previous Call of Duty titles: it’s the only Call of Duty game to be set primarily during the Cold War, and it allows its protagonist to actually, y’know… talk. Like World at War, Black Ops features big-name celebrities in its voice cast, including Sam Worthington, Gary Oldman, Ed Harris, and Ice Cube. Black Ops is an otherwise familiar Call of Duty production, featuring all of the first-person shooting and chopper-getting-to that fans could want.

Anyway, Mason begins his recollection by admitting that he was part of a CIA op to assassinate Fidel Castro, but was captured and sold to a Soviet general named Nikita Dragovich. Dragovich takes Mason to a Soviet labor camp, wherein Mason befriends a disgraced Red Army captain named Viktor Reznov… the one and same Viktor Reznov from Call of Duty: World at War. Reznov, who has his own reasons for hating the Soviets, conspires with Mason to break out of the labor camp. After being thoroughly checked for communist cooties—or coomies (TM)—Mason is ordered by President Kennedy to assassinate Dragovich.

In Soviet Russia, rail leans against YOU!

The rest of Black Ops documents Mason’s worldwide hunt for Dragovich, and the gradual revelation of the Soviet general’s plans for America. Mason serves as the protagonist for most missions, but players occasionally switch over to other operatives for specific or concurrent covert ops. Mason is accompanied in most missions by Frank Woods, another CIA operative who inhales America and defecates communism, and Joseph Bowman, a more reserved agent whom Ice Cube does a pretty good job bringing to life.

Even though the phrase “black ops” brings secrecy and furtive stealth missions to mind, Black Ops still packs all of the explosions and American overkill that Call of Duty built its brand on. Sure, Mason spends plenty of time sneaking around slitting throats, but one mission quite literally dumps the player into the middle of a Vietnam battlefield. Even the more low-key missions, like escorting a defector through the alleyways of Hong Kong, pack plenty of foes to gun down. Players shouldn’t expect Black Ops to change up the series’ emphasis on first-person shooting or gently patronizing them for stepping on a grenade. 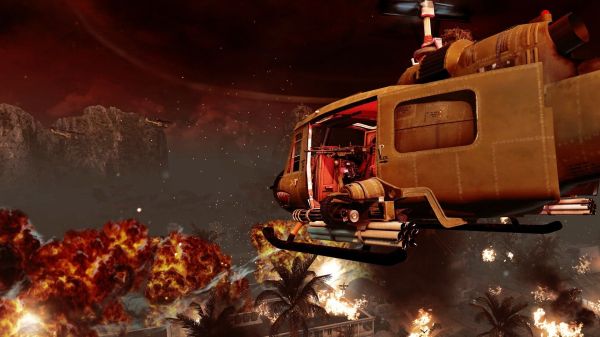 OH BOY I LOVE BEING SO SNEAKY AND QUIET AND SUBTLE!!!!!!!

The debate of which Call of Duty game marked the series’ descent into mediocrity is ever in flux, but there’s one Call of Duty trend that Black Ops originated without a doubt: gimmicks. Call of Duty games these days are well-known for giving the player a cool toy like a hang glider or robotic sniper rifle, but only for a little bit of playtime before it’s put away forever and it’s back to shooting. Black Ops is where this trend really took off, giving the player a newfangled spy gadget to use for five minutes before it magically disappears. Then it’s back to shooting the reds for another 10-15 minutes.

That mindset of scripted gadgetry is unfortunate, and it represents a missed opportunity to innovate Call of Duty‘s game design. It’d be much more interesting to have a level with organic, player-chosen opportunities for rappelling or hang-gliding or whatever, instead of a short, scripted sequence that serves mainly to break up the monotony of the shooting. The question of why this innovation never took place is rhetorical: it’d be a lot more work for the studio. But, that doesn’t stop the possibility from coming to mind. It certainly doesn’t stop players from wondering where that crossbow that shoots grenades just disappeared to. 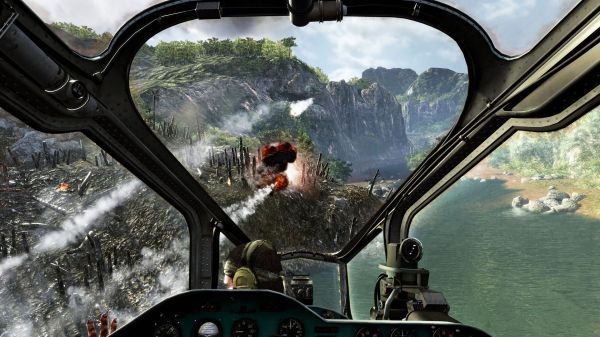 But I just got INTO this thing!

The gameplay in Black Ops‘ multiplayer mode is less scripted but largely dead. It should come as no surprise that a seven-year-old Call of Duty game has had its multiplayer undergo complete rigor mortis. A tiny ember of a community still burns from time to time, but there are much better, livelier multiplayer experiences to be had in other games. Call of Duty‘s multiplayer might be the talk of the town whenever it hits stores, but let’s be honest; between the mode’s tiny maps, non-dynamic environments and paltry selection of modes, players are better “multiplaying” it up in Battlefield.

It’s hard to believe, but the zombies mode that was in Call of Duty: World at War was almost cancelled. Now it’s considered an essential element to the series’ formula. Black Ops is where the zombies formula expanded from a fun little map into essentially its own campaign. The game’s defense map features an anti-zombie all-star squad comprising JFK, Fidel Castro, Robert McNamera, and Richard Nixon, who all fire off funny little quips just as often as bullets. There’s a story-lite campaign in the zombies mode, but most of it is available only as DLC. Womp womp. 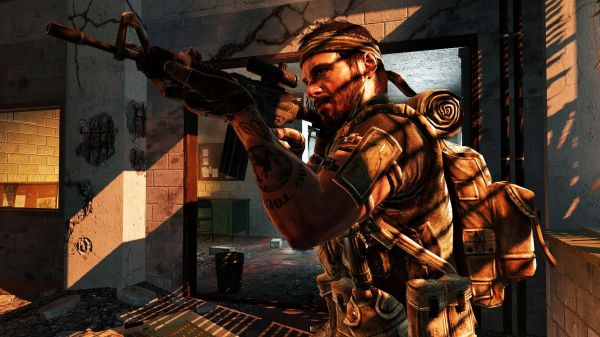 I call dibs on my zombie apocalypse name being Tallahassee.

Thus far, Black Ops doesn’t sound too terribly different from any other Call of Duty. Sure, it’s set during the Cold War, but the shooting and the scripted kill-toys are endemic to other CoDs set in other time periods, so what’s the big deal? Well, Black Ops innovates the Call of Duty series in the last place anyone would expect a Call of Duty game to innovate: the story.

Treyarch’s narrative gets a big boost with all the movie stars they brought in to voice the characters. Gary Oldman is in unmistakable form as Soviet defector Viktor Reznov, and aptly brings that character’s thirst for revenge to life. Ed Harris brings his steely-eyed demeanor to the fold as fellow operative Jason Hudson, who quietly becomes one of the best supporting characters in any Call of Duty game. The least impressive performance comes from leading man Sam Worthington—his delivery is emotional enough but he alternates between an American inflection and his native Australian accent with alarming carelessness.

Even if Treyarch hadn’t called in some big guns to bring Black Ops‘ characters to life, the narrative itself is a sorely underrated venture into the darkest depths of the Cold War. It helps the main story immeasurably that the protagonist can talk; in previous Call of Duty games, the player was meant to be a silent witness to the events rather than an active participant. Because Mason is fully voiced and the story is driven by his decisions, players can feel a much stronger connection to the plot than in Call of Duty games past. Mason’s character is further fleshed out in the cutscenes and dialogue between missions.

The focus on a singular character makes Black Ops‘ larger world flow together nicely. Even though the plot jumps back and forth a few times, it’s not as jarring to suddenly be dropped in a new locale, because Mason’s there to explain why. Black Ops‘ story even features a few elements of psychological horror, digging deep into Soviet-era sci fi to breathe fresh life into a premise as tired as the dastardly Soviet general. The story gives itself time to build colorful backstories (some of which are even more tragic than Mason’s), culminating in a shooter whose atmosphere is bleaker than a Siberian winter… and richer because of it. 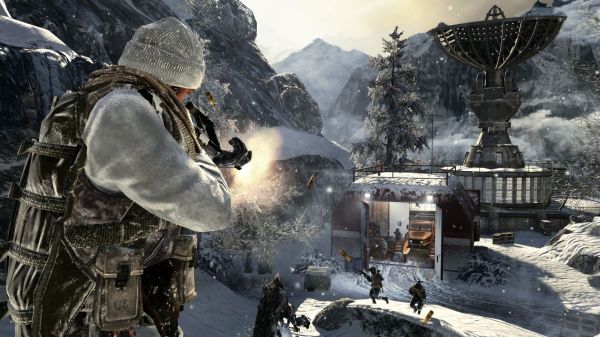 Quick! Before they morph into vodka-powered snowmen!

A nice little touch layered on top of all of this is that Black Ops finally de-glossed the IW engine. Yep, whereas even the most bombed-out objects in previous Call of Duty games looked polished and pretty, Black Ops finally mastered the art of making objects look dirty. One small step for game development, one massive step for Call of Duty. As with other, older Call of Duty games, Black Ops‘ visuals have aged remarkably well. The music isn’t the most memorable, but the sound design is great. Have those speakers taped down in case the tank fire rattles them off the desk.

In closing, Call of Duty: Black Ops is not the highest-rated CoD ever made, but it has far and away the best narrative of the series. The depth of storytelling Black Ops achieved was a breakthrough for the series in 2010, and no Call of Duty story penned in the seven years since is anywhere near as good. Even gamers who aren’t much for shooters should consider picking Black Ops up on a sale. Yes, that’s a serious recommendation to pick up a Call of Duty game for the single-player campaign.

You can buy Call of Duty: Black Ops here.