Race on zany tracks made from your favorite music.

Music is often compared to a drug, with good reason. It can have a profound effect on mood, outlook, and the desire to thrash one’s head back and forth like someone receiving an exorcism. How fitting, then, that Audiosurf 2 combines music with the psychedelic visuals associated with hard drugs. It also allows players to choose how those two media interact, for just as the atmosphere and composition of a song can affect mood, so too can those qualities of a game. Audiosurf 2 seeks to join music and gameplay together in creative ways.

Created by Dylan Fitterer, developer of 2008’s Audiosurf, Audiosurf 2 is a game that lets players ride their music. Simply upload a favorite song, plug in a visual theme, and ride a futuristic car along a road paved with that song’s notes. All the while, that tune is playing in crystal-clear quality. Players can also collect points that pop up along the track and execute combos to drive up their score. Just like in Audiosurf, players can select different vehicles and from a palette of different visual themes.

Once players have picked a song, a ride, and a theme, it’s time to hit the road. Audiosurf 2‘s music-seeking software makes finding a song on the hard drive easy as pie. The game comes with a few pre-packaged songs, but they’re not all that great. Besides, Audiosurf 2‘s best selling point is hitting a digital road to the tune of the player‘s favorite song, and it executes that function smoothly. That the game can build a track out of any song means that Audiosurf 2 has as much variety as the entire spectrum of music. It’s a cool feature whose novelty is matched only by that of the original Audiosurf.

Audiosurf 2 has single-player and multiplayer modes. Whoever can rack up the most points littering each track gets a spot on that song’s worldwide leaderboards. More popular songs have a lot of competition for spot no. 1, so uploading an obscure song is a great way to earn worldwide prestige on the cheap. Success in multiplayer requires knowing the ebb and flow of the song, and maximizing a vehicle’s points-earning ability. Similarly to Audiosurf, points take the form of blocks called “cars” and mosey along the road for players to speed through.

How cars are laid out and how the track flows depends entirely on the song. A slow or tranquil song makes for a straight shot of a race, while a fast song can produce one heck of a bumpy road. The faster the song is paced, the more difficult the track. Players can swap between three lanes of traffic to pick up points and fill three points meters at the bottom of the screen. Players may be expected to collect points while going over a series of speed bumps or even through a loop-de-loop, depending on how intense the song is. 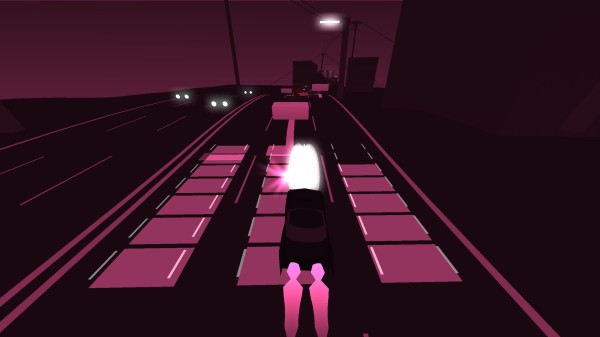 Although Audiosurf 2‘s track-building software seems little-changed from that of Audiosurf, the game features a larger palette of visual themes. Whereas players were previously restricted to a small handful of themes, Audiosurf 2 has a much wider selection of stylized racing worlds. Players can stick to the game’s signature Tron-esque racing corridors or opt for dusky cities, winter wonderlands, etc etc. Audiosurf 2 also has a thriving modding community, and players have created dozens of additional tracks to choose from. The Knights of the Old Republic swoop racing level is particularly fun.

On top of that, Audiosurf 2‘s visuals have received a serious overhaul over those of the first game. Audiosurf is a beautiful game, but its textures are blurry and its objects occasionally hard to define. Audiosurf 2 opts for much sharper visuals and brighter, more interesting lighting effects. The vehicles have much more defined textures, and some tracks feature reflective, well-lit surfaces.  The other elements of the racecourse, like the track itself and the in-game visuals that spawn and bloom around the player, are also significantly more beautiful. 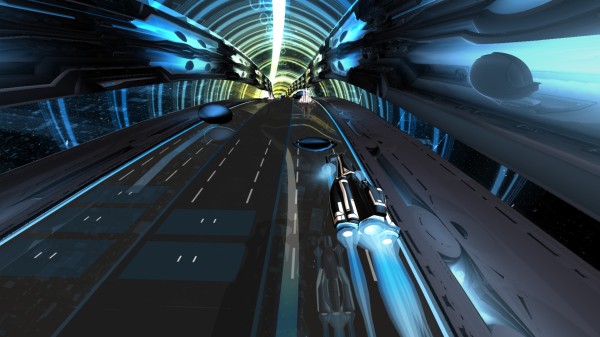 One of the issues plaguing Audiosurf was the game’s vehicle selection, which gave players a huge roster of different musical buggies and vaguely defined special abilities. Some vehicles might be better at gathering points arranged in a row, others might force false point blocks onto the track, so on and so forth. Audiosurf 2 nixes this issue by reformatting the different vehicle perks as racing modes. Now, players simply pick a mode where points are gathered in clumps instead of having to pick a vehicle that executes that effect. Players can now select a vehicle for how it looks, not what it does.

Even though Audiosurf 2 also does a better job of explaining each mode than the first game did, this title’s loading screens are peppered with weirdly written advice, like gathering points during “big moments” in a song. It’s possible that Dylan’s referring to loop-de-loops or something, but everyone’s idea of a “big moment” in a song is different. That’s the beauty of music, but it also obfuscates the meaning of the in-game advice. Players are better off sticking to the stated goal of the mode they’re in. Those tidbits, at least, remain clearly written.

I’m supposed to do what now?

Audiosurf 2 also benefits from improved menu design. The options menu is a far cry from the barebones sliders and buttons in Audiosurf, with more ways for players to tweak their in-game experience. The menus for selecting races and songs have also been heavily streamlined and are broken down into three simple selection windows that make getting out onto the course a piece of cake. (By the way, my recent dieting is responsible for all these baked good analogies. About to hit day 90 of the diet and am hallucinating that everyone is birthday cake or a piece of pie. Maintain a safe distance).

Although Audiosurf 2‘s core menus are a sight for sore eyes, not all of the game’s interfaces are well-implemented. The YouTube streaming option is a crapshoot; at one point that mechanic’s implementation broke the entire game and made it impossible to play without streaming. That problem was eventually remedied, but the patch has since resulted in sound issues for many players. Gamers who buy Audiosurf 2 have noted, with alarming regularity, a complete lack of sound across all operating systems. A steady stream of patches hasn’t done much to stem the flow of these complaints.

This game has a few glitches in the matrix.

More than a few Audiosurf 2 players have also taken the game to task for its inability to stream music from services like Spotify and Pandora, but making that kind of arrangement with the music industry can be murderously difficult. These companies guard their music with enough jealously to make a French lover balk, and that’s no hyperbole. Dmytry Lavrov, developer of 2010’s The Polynomial, mentioned to Art as Games that current industry laws make it very difficult for music games to stream songs and even use certain file formats. Truly, music execs are the Scrooges of the digital age.

So yeah, while only being able to use music stored on a hard drive may seem like old hat these days, Dylan deserves a bit of a break for not cracking into the most curmudgeonly segment of the entertainment industry. Music executives and industry leaders have guarded their holdings for decades, and it’s most likely that obstruction, not Audiosurf 2, that’s responsible for the game’s lack of streaming compatibility. Overbearing restrictions and copyrights are probably why Audiosurf 2‘s Soundcloud compatibility was abruptly stripped out a while back. Hopefully the situation will change someday, but in this age of overzealous DRM, it’s unlikely.

The music rights are in another castle!

Audiosurf 2 offers a streamlined, reforged music racing experience over its predecessor, but players would do well to watch out for those aforementioned sound bugs. Give the game a go; if the sound still works, keep the game and give that music library a whole new meaning. If not, return Audiosurf 2 to sender and dive back into the first game. When Audiosurf 2 runs well, it takes the freedom and fun introduced by the first game to dramatic new heights. It makes racing on favorite songs a cinch and customization of the overall experience easier. Hopefully Dylan will continue to work on the game and address its rough spots, as he’s done diligently since its 2015 release, but Audiosurf 2 is worth at least trying in the meantime.

You can buy Audiosurf 2 here.