Pumping aliens full of lead is not a new trend in video games, but the Crysis series’ impact on that premise is sorely underappreciated. The original Crysis is one of the best shooters ever made, with a lively mix of open-ended levels and tactical gunplay that few, if any, modern titles have replicated. Crysis 2 was kicked onto shelves four years after its predecessor stormed the boards with high-end visuals and exotic alien weaponry, and while it has both of those things in spades, Crysis 2 marked the series’ descent into the relative obscurity it “enjoys” today, despite being a good game.

Crysis 2 was developed by Crytek, the one and same German studio that produced the first Crysis and the original Far Cry. The game is built on the CryEngine, so named because its high-end visuals and steep processing demands have been known to make computers shed tears. Crysis 2 continues its predecessor’s proud tradition of eye-popping visuals and smooth performance, but don’t try to run it on a potato. Its in-depth options menu can only do so much to throttle the game’s visuals, which were several years ahead of its 2011 release date.

Crysis 2 is set in 2023, three years after a group of special ops soldiers accidentally unearthed prehistoric aliens in the first game. Those aliens, the Ceph, have since begun attacking humanity worldwide, unleashing a lethal virus in New York City. The game begins as a Marine code-named Alcatraz is sent to NYC to extract Dr. Nathan Gould, a scientist who claims to have info on stopping the disease. Alcatraz’s infiltration goes south when the Ceph sink his submarine, and when he wakes up, he finds he’s been strapped into a Nanosuit.

Alcatraz finds out that the suit’s owner was on his way to save humanity from the virus, but got infected before he could finish the mission, leaving Alcatraz to carry on instead. The suit left to Alcatraz is the one and same piece of equipment used in the original Crysis: a suit that allows its wearer to jump higher, run faster, and even turn invisible. Even with those abilities, Alcatraz has his work cut out navigating a city full of alien warriors and hostile human mercs. He sets off for Dr. Gould’s lab in the hope that humanity can be saved after all.

Players can use their Nanosuit’s powers to play Crysis 2 their way. Alcatraz can barge in with armor mode on, or play it cool in stealth mode. Crysis 2 introduces a few improvements on the suit over Crysis, like combining speed and strength modes into a single physical fitness module, and allowing players to use multiple modes at the same time. Players can use these abilities in short bursts before waiting for the battery to recharge, but Alcatraz’s proficiency with firearms leaves him anything but helpless.

Players can leverage Alcatraz’s suit however they want.

As in Crysis, the enemies in Crysis 2 are more intelligent than your standard-issue bad guys. They use tactics, they fan out, and they notice strange activity. Alcatraz has to fight his way through groups of alien soldiers and the soldiers of the corrupt CELL corporation, and they each use different weapons and strategies for taking the hero on in battle. This gives Crysis 2 a pleasant jolt of variety, as players never know if the next corner’ll have straight-faced human grunts or octopuses clad in armor. Both are smart, and both make for fun target practice.

It’s disappointing that Crysis 2 nerfed its alien enemies, though. In Crysis, the Ceph attacked with giant flying creatures, which were tactically distinct from the game’s other foes and felt scary to fight. In Crysis 2, the Ceph have reconfigured themselves into human-shaped soldiers. The story’s tagline is that this form is better suited to urban combat, but making the Ceph humanoid takes away from the novelty of the first game’s flying death squids. It makes the aliens feel less, well, alien.

The enemies act different, but they go down the same way.

The Ceph are given the spotlight they deserve in Crysis 2‘s narrative, which is more nuanced and fleshed out than the first game’s story. As Alcatraz fights his way through New York City, he becomes bound up in a series of conspiracies that do what most military shooters don’t: take straight-faced dudes in flak jackets and make them multifaceted. Several factions in the city have different goals for the aliens, and navigating those goals becomes as dangerous as Alcatraz’s street-to-street firefights.

Along his journey Alcatraz meets up with a gallery of fascinating and well-written characters. Dr. Nathan Gould is Jurassic Park‘s Ian Malcolm on steroids, spouting off funnily written anecdotes about science alongside his life-or-death monologues about beating the Ceph. The CELL Corporation’s Lieutenant Strickland seems dedicated to her company’s shady behavior on the surface, but the events she drives on and off of Crysis 2‘s screen point to something more. Crysis 2 has crisp, multilayered writing that concisely tells the story and provides a great deal of exposition. 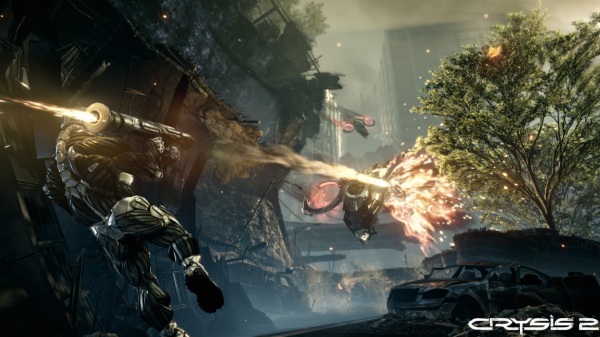 Bazooka drone murder. Another possible name for the band.

Crysis 2‘s rendition of New York City makes for a thrilling sci-fi setting, and is to Crysis‘s tropical island what night is to day. The thick jungle groves of the first game have been traded out for blocks of skyscrapers and narrow alleyways, making Crysis 2 one of gaming’s purest exercises in urban warfare. Visually, the game is stunning, with sharp textures blanketing every surface. Volumetric lighting and shadow affects that were years ahead of their time make Crysis 2 look more like a 2014 title than a 2011 one. The game’s use of strong color, fluid character animations, and impressive facial capture technology all do a great job of bringing this game to life. The visuals certainly add to the fun of visiting post-apocalyptic Wall Street, Times Square, and other NYC locales.

Unfortunately, Crysis 2‘s level design is what stops the game from being as novel as its predecessor. Even more than the Nanosuit, the core characteristic of Crysis was being able to play across large areas. Players could traverse entire square miles of terrain on their way to a goal, free to sneak or shoot their way through and explore for hidden avenues. Crysis 2 sadly abandons this design philosophy in favor of narrow linearity, which gives the game a much more pedestrian feel. Crysis 2 might’ve appealed to a larger audience by going the way of Call of Duty and Halo‘s level design, but sacrificed much of the series’ novelty in the process.

Only one path forward.

In making Crysis 2 so linear, Crytek also missed an opportunity to apply their open-ended formula to an urban environment. New York City is a metropolis teeming with vertical space, whether it’s underground in a subway tunnel or atop the city’s many skyscrapers. Imagine if players had the freedom to traverse these environments as they saw fit. Alcatraz spends plenty of time in subway tunnels and on skyscrapers, but it’s all predetermined. That player agency that made Crysis such an open-ended tactical masterpiece has been abruptly amputated in Crysis 2.

The level design’s drastic change doesn’t make Crysis 2 a bad game. In fact, Crysis 2 remains one of the better sci-fi shooters made this decade; but the game has a much harder time standing out from the other titles in its genre because of its linearity. Fans of the first game will be sorely disappointed to be shunted down avenues instead of free to sit in a river all day watching enemy troops play Parcheesi. 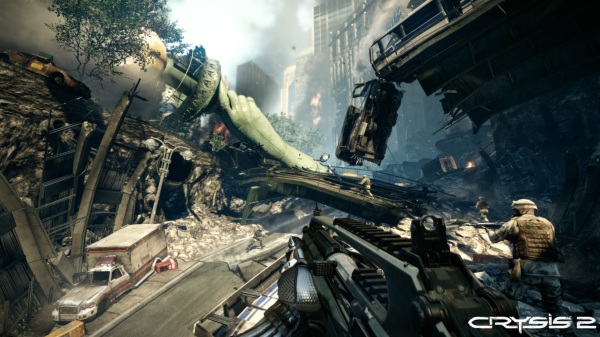 Look at all of those invisible walls.

Crysis 2 is still worth any shooter fan’s time thanks to its fierce firefights and outstanding visuals. The game also benefits from neatly written storytelling that gives players exposition and character development at a smooth pace. It’s just a shame that Crytek decided to forsake the open-ended design that helped put their first titles on the map. It’s not a given that this format change made the Crysis series harder to distinguish from other first-person shooters, but considering that Crysis 2 still does everything else better than most games in that genre, it’s a strong possibility. Enjoy saving New York City from aliens, but don’t expect Crysis 2 to allow for any dillydallying.