Find a way out of a labyrinthine, robot-riddled laboratory.

There’s no denying the allure of puzzle games. Players who are put off by their potential difficulty risk missing out on that sweet sense of accomplishment that comes with their completion. Indeed, that sense of accomplishment is arguably sweeter than that of any other genre, since puzzles engage the mind in a way shooting bad guys or motoring down a raceway cannot. Since the game that was originally slated to be reviewed today won’t run, this is an excellent opportunity to write all about Portal 2, one of gaming’s most beloved puzzle-fests.

Portal 2 is a game that requires little introduction. Like many properties of the almighty Valve Corporation, it’s as much a piece of pop culture as it is a titan of the video game world. If someone hasn’t played the game, they probably recognize the iconic Companion Cube. Or they’ve heard the iconic (and traumatic) line, “the cake is a lie.” Though it released over half a decade ago, Portal 2 remains a staple of fun puzzle gameplay and comedic impersonations the gaming world over. So why isn’t it being reviewed on this page until now?

Well, like many things in life, Portal 2 got lost in the shuffle. But now there’s an opportunity both revisit a beloved classic and plug a serious hole in this page’s back catalog. Besides, with all the surreal and horror games reviewed here recently, a few puzzles thrown together with clever writing and exceptional level design never hurt anyone. 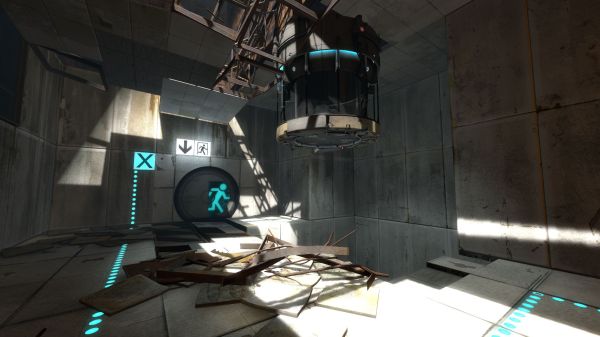 The original Portal was designed and released alongside Team Fortress 2 and Half-Life 2: Episode Two, back when the delay on Half-Life games was only a year or so. Though Valve intended Half-Life 2: Episode Two to be the star of the trio, Portal ended up stealing the gaming world’s heart much more than anyone anticipated. Between its puzzle-platformer gameplay, its intriguing world, and some stellar writing, Portal became one of gamedom’s very favorite odysseys — a title it still holds today. Valve promptly began working on a sequel and released it about four years later, though many fans were irritated that the studio hadn’t spent that time working on Half-Life 3 (ahem.)

Anyway, Portal 2 takes place some time after the events of the original game, in which a tenacious test subject named Chell wakes up in the abandoned labs of Aperture Science and engages in a battle of wits with a sarcastic, sadistic AI named GlaDOS. Though Chell survives the endless test chambers, thanks in no small part to her handy-dandy portal gun, she nonetheless remains trapped in the facility. With nothing better to do, she enters suspended animation, only to be woken up who knows how many years later by a knock at her door.

Chell opens her door and befriends a spherical little robot named Wheatley, who’s woken her up to ask for her help in escaping Aperture Science. He reasons that the two stand a better chance if they try to escape from the labs together, an assessment that silent character Chell apparently agrees with. Together, the two venture out of Chell’s suspension chamber and into the vast, untamed wilderness that the labs have grown into. Portal 2 nixes mentioning exactly how long Chell’s been asleep, but given that there are now forests in the place of break rooms, it’s safe to say… a long time.

It’s not too terribly long before Chell finds a portal gun, the amazing inter-dimensional device that serves as the true star of the Portal series. With it, Chell can create interconnected doorways on most flat surfaces and walk instantly between them, a gimmick that also powers most of Portal 2‘s puzzles. Escaping the lab quickly becomes the least of Chell’s problems, though, as Wheatley accidentally reawakens a vengeful GlaDOS from years of slumber. It will take all of Chell’s wits, and her skill with a portal gun, to outwit Aperture’s malicious administrator a second time. 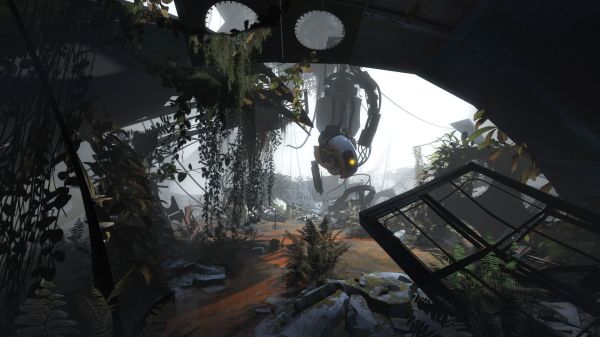 With GlaDOS reactivated and the facility turning back to its pristine panels, Chell’s got her mission of escaping Aperture once and for all cut out for her. She’ll usually have only herself to rely on, as Wheatley, while well-meaning, ain’t exactly the brightest of bots. All the while, Chell also has to endure constant taunts and threats from GlaDOS, who intends on exacting her revenge in some unspeakable way. Chell will have to solve puzzles and elude traps in order to make it out. At least, if she wants to be… still alive. (Ba dum tss.)

Just like its predecessor, Portal 2 is a first-person puzzle game that relies on portals as its chief problem-solving mechanic. The game makes a few major breaks from the original Portal, extending far beyond the original’s hour-long length for a full 8-10 hours of puzzling. As Chell progresses, the game also adds a few traps and gadgets not seen in the last game, including laser-redirecting cubes and splashy gels that ignore the laws of physics.

Oh yes, and we can’t leave out the gravity beams.

In its purest form, the goal of Portal 2 is to solve a puzzle chamber. Usually this entails finding a block to hold down a button to hold open a door so Chell can leave the area. Players can use their portal gun to access difficult vantage points and manipulate the environment around them. Can’t reach that block over there? Pop a portal onto the wall behind it, walk through, and grab it right quick. The game starts players out on a few easy chambers… actually, the exact starter chambers as the first Portal, but they gradually ramp up in difficulty. Chell also has to use her gun to navigate Aperture’s long-abandoned environs in sequences that, while not cordoned-off puzzle chambers, are about as challenging.

It’s Portal 2‘s smooth learning curve and fun with portals that make Portal 2 so endearing. Though few would suspect otherwise of a Valve-made game, Portal 2 really is a well-designed title. The game does a great job at gradually introducing new items, and then new ideas of what to do with those items, over and over until its conclusion. It’s also not afraid to mix those items and situations together to produce a new conundrum. Though Portal 2‘s puzzles get longer and more difficult, the game does well at equipping players for the path ahead. This game’s toughest puzzles are also of a considerably larger scale than Portal‘s, resulting in a longer sequel that preserves the original’s sense of pacing. Overall, the gameplay is a pretty solid package that leaves little room for complaints. 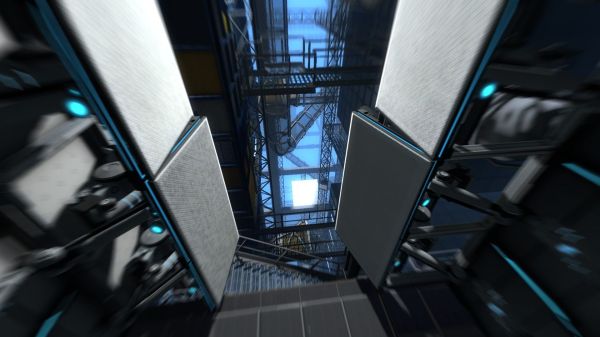 Portal 2‘s visuals have aged a tiny bit in the last six years, particularly in regards to texture detail. The game still manages to impress with its vast color palette, expanding beyond the stark white of the original and incorporating faded colors for Aperture’s older areas. Again, because this is a Valve game, every option and its mother is represented in the game’s comprehensive menu. Tweak this, slide that, whatever needs to be done to get the game to work on PC, Portal 2 can match it.

Even more than the visuals, though, Portal 2‘s excellent voice acting is what completes the game’s curious atmosphere. Ellen McLain reprises the role of GlaDOS, as sarcastic and clinical as ever, while British comedian Stephen Merchant makes Wheatley video gaming’s most lovable idiot. Even more impressive than either of these stellar performances, though, is the voice work of J.K. Simmons, who was brought on to voice eccentric Aperture CEO Cave Johnson. Though Johnson is long dead by the time the game begins, his legacy lives on in voice recordings that play in the older areas of Aperture. Nothing that Simmons voices can afford to be missed, especially Cave’s hilariously inept introduction to decades-gone “new arrivals.”

Lasers. Why does it always have to be lasers?

Decent visuals and physics puzzles are all well and good, but what truly gives Portal 2 its intrigue is its atmosphere. The game aptly blends some seriously cool sci-fi with some of gaming’s most laugh-out-loud dialogue. Portal 2 uses this mix of ooohs and laughs to strike the same absurdist vein of black comedy that made Portal so iconic. From oddly specific anti-meteorite policies to Cave Johnson’s mantis-man initiative, Portal 2 doesn’t lack for things to laugh at. GlaDOS returns with a more acidic brand of jokes than she had in Portal, lacing threats to kill Chell into gags about her weight and French fashion designers.

Inlaid in the dialogue and humor, though, is a surprisingly poignant narrative that fleshes out what Portal began and adds new perspective to its small but poignant cast of characters. Chell realizes that there’s much more to Aperture when she stumbles into a condemned area of the facility, and learns that there might be more to GLaDOS than a sadistic robot with a flair for cake. Wheatley, expressly programmed to be dumb, is far more than the archetypal village idiot, and undergoes quite a character arc of his own. None of the same can be said for the silent Chell, but that’s okay; the myriad of interwoven subplots and sci-fi lore is plenty sufficient. Similarly to Half-Life, the player is meant to be a silent observer, whose experiences and those of the main character are one in the same.

Overall, Portal 2 is a watertight title with top-notch production values and that runs bug-free on PC. That last one is a godsend in a world now dominated by broken day-one releases. Six years on, the game remains an avidly competitive and ambitious puzzle game. Other puzzle-y games, like Quantum Conundrum, have attempted to wrest some of Portal 2‘s stardom away with no success. Some players have noted what they see as flaws in the game, like the Cave Johnson section being much longer than the rest of the title, but it’s honestly difficult to find concrete flaws in Portal 2‘s design.

As for those two robots on the cover art, Portal 2 includes a second full-length campaign set sometime after the main story that follows those little guys as they try to make an escape of their own. The kicker is that this campaign is co-op; its story isn’t anywhere near as strong as that of the main game, but damn if it isn’t fun. The puzzles return, but with the added novelty of requiring two bodies to solve them instead of one. Those are fun too, whenever killing your teammate with shifting ceiling blocks gets old.

I’ve seen some slip’n’slides in my time, but damn!

Portal 2 has little that even the biggest skeptics wouldn’t crack a smile at. It has fun, tightly designed puzzle gameplay, an intriguing central narrative, and some truly memorable voice acting. As a whole, it’s a wicked (and wickedly funny) experience that will leave players truly remiss when the exit, whatever form it takes, finally looms into view. Play the first game if you haven’t already, and then dive into the hilariously absurd scientific madhouse that is Portal 2. As Cave Johnson might put it, the worst that could probably happen with the time put into the game is missing out on a few rounds of Canasta later in life.

You can buy Portal 2 here.