The Pasture is evidence that video games can never have too many worm-filled coffee cups or amorphous art enthusiasts. It’s also evidence that the stream of “out there” indie games won’t be drying up anytime soon. Unintentional as this year’s surreal motif has been, games like The Pasture present a nice change of pace from big-budget shooters and endlessly massive adventure titles. But that doesn’t let them off the hook from needing to have some kind of point. The Pasture has a point, buried somewhere in its lucid art gallery dreamscape, but like an art gallery, the point is up for debate.

The Pasture is a weird little horror game created by Mikhail Maksimov, a Russian modern art enthusiast. The game aptly blends curating an art gallery with pure survival horror, a concoction most gamers probably don’t wake up expecting to see on any given day. The Pasture is much more than being chased through an art gallery by monsters, though. Indeed, it’s sometimes hard to know if the player isn’t the monster.

The Pasture is set at a large modern art gallery. Players can choose to explore the yard outside the gallery or the building’s stark white interior. Both areas are populated by streams of shapeshifting, anthropomorphic creatures that wander aimlessly from exhibit to exhibit. They, though, are not stars of the show. The stars are the two monsters that stalk the player throughout the gallery. 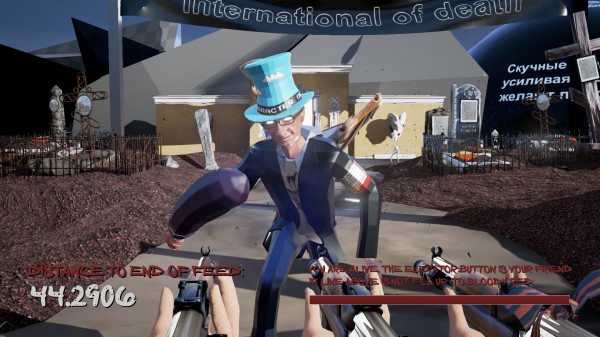 Yes, because it’s not enough to populate the trippy art gallery with headless white creatures and floating pieces of art, there are also two monsters staggering around the gallery’s halls. To make matters more alarming, each monster is never more than a few steps away from the player, who must always walk backwards to avoid being jumped. The game pauses whenever the player stops walking, and players can pivot the camera to see what they’re walking into. Spend too long walking without stopping for a break, and the monsters will beat the player to death. Given that the monster is always walking toward the camera, perhaps it’s the true protagonist of The Pasture.

While all of this is going on, players can walk backwards around the gallery, stumbling into Russian art pieces strewn about the premises. Each piece is, according to Maksimov, one of the most important sculptures in the history of Russian modern art. Players have to collect as many of these pieces as possible without getting killed by the monster pursuing them. The more art collected, the higher the final score. Players also get props for locating the gathering spot for an art gallery tour.

WTF is this game…

Okay, so, there’s a lot to unpack with those preceding paragraphs, not one word of which was hyperbole. The player literally spends thirty minutes walking backwards, collecting Russian artwork, all while tall monsters babble at them in Russian. What is the point of an oddity like The Pasture? IS there a point? It’s easy to dismiss The Pasture as the fever dream of an LSD addict (and it may very well be) but there’s more to this Jodorowsky-esque drug trip than meets the eye.

Unfortunately, The Pasture‘s lack of an in-depth options menu may preclude its weirdness for some players. With a small menu that provides for only the most basic options, players have little recourse if, for whatever reason, The Pasture doesn’t function on their machine. And unlike most indie games with small options menu, The Pasture‘s visual sophistication far outpaces the number of options available. It’s not a deal-breaker, but it’s not helpful. 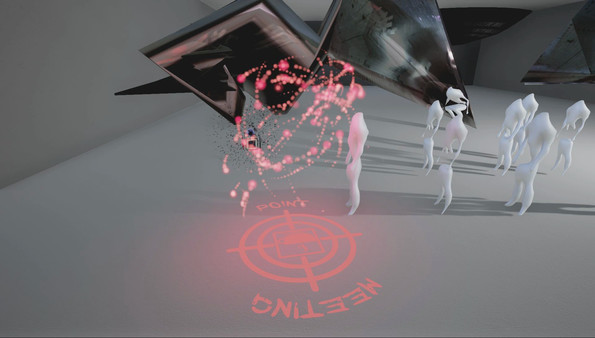 The Pasture‘s aforementioned visual sophistication helps give this game its surreal edge. The game was built in the Unreal Engine, and it has appropriately impressive visuals and textures. The character models are well-detailed and smoothly animated, though some of the monsters’ clothing glitches through itself. Textures are pleasingly sharp, as is The Pasture‘s in-game text. The stark juxtaposition of dark objects in stark white gallery walls also draws the eye, as do the gallery grounds’ combination of blue skies and black walls. The Pasture looks great, especially for a small indie game.

Even though The Pasture‘s environments are bright by default, the game still comes with a few different shades of light. Most areas are bright as day, but the game also includes a few dark corridors that are a bit spooky… especially when a green, 10-foot-tall woman is walking right behind the player. The Pasture is a weird game, but it remembers the impact lighting can have on an unsettling atmosphere.

Would you care for some worm tea?

The sculptures the player finds scattered around the gallery can make an art enthusiast of even the most ardent anti-hipster. Curios are signified by a floating, glowing box that players can walk over. Doing so triggers a picture and informative paragraph about one piece of art or another, with pleasingly few translation errors. The piece then spawns in the gallery, leaving players free to find more. Art appreciation is one of the game’s strongest arguments (and one of the strongest arguments for playing this game).

Even if there’s quite a disconnect between looking at Russian art and pointing an AK-47 at a shape-shifting Uncle Sam, the pieces players can find around the gallery are interesting. Modern art enthusiasts will find The Pasture a pleasure, but even players who roll their eyes at the idea of subconscious art would be remiss to omit some of these. Finding some of these pieces can be quite challenging, which adds an adventure element to this game. Indeed, something so bizarre as an art gallery populated by these creatures prompts exploration almost by default. 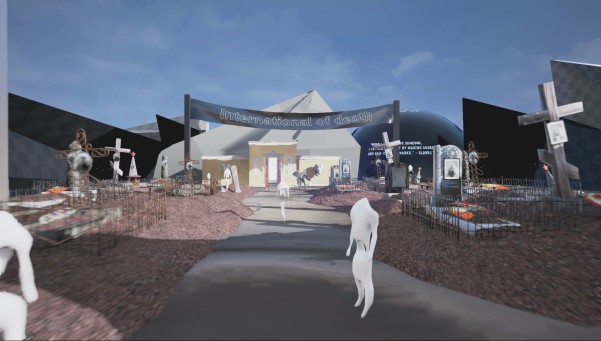 What in the world…

The Pasture has no narrative beyond the stories its sculptures tell. If there is more of a story to this game, the developer did a damn good job obscuring it behind white sculpture people and floating tombstones. The biggest issue story-seekers might have with The Pasture is that the game’s text is divided roughly in half between English and Russian. Some banners are written in the former, others the latter. The monsters also babble in Russian, so western gamers will likely have no clue what they’re saying. The Pasture never states an intention to tell an in-depth story, but who knows what exposition might be in all that Russian.

In stating its main objective as soon as possible, The Pasture avoids coming off as a pretentious mess, despite its disorienting design. Even from the get-go, even while being pursued by strange monsters, it’s clear that the point of the game is simply to study modern art. The game’s world is an embodiment of the same weird, subconscious motif prevalent in sculpture these days. Because The Pasture has a clear objective, it succeeds in making the player feel like they’re achieving something. That they’re going somewhere. That isn’t always simple in a game that can overwhelm the senses as strongly as The Pasture. But, by making its objective clear and making no attempts to disguise itself as a tamer title, it works. 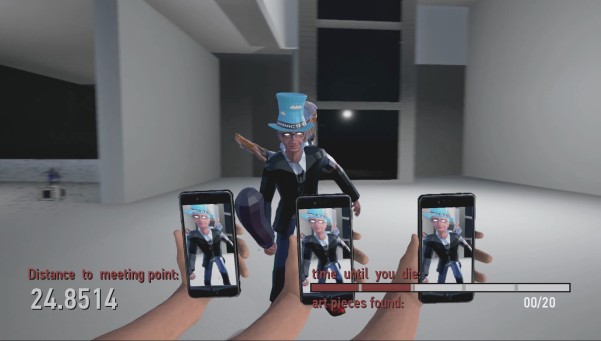 Take me to the art.

Obviously, The Pasture doesn’t suit all tastes. It’s a 1-dollar, 30-minute romp through a surreal art gallery while walking backwards and being pursued by a strange monster. Such a smattering of weirdness does not a game for everyone make. However, there is a point to all of its random ideas, and it contains some of the most amazing real-life sculptures in art history. Its stark, bizarre world is also worth experiencing just for the novelty. Gamers who like surreal worlds and unique concepts should at least try The Pasture. It’s a weird little game that leaves the eyes wide and the frontal lobe in disrepair, but it does so with confidence. At the very least, it helps players bone up on their knowledge of both modern art and the side effects of who knows how many hallucinogens.

You can  buy The Pasture here.