Escape a remote high school before it sinks into the underworld.

With the release of Thing-in-Itself, Steam is finally rousing itself from a sluggish start to the year. If this month has been any indication, Steam’s destiny in 2017 is a few thoughtful gems amid a giant mountain of trash. In other words, it’s keeping the course. But what of those thoughtful gems? Well, Detention recently released on the platform to this year’s strongest bout of critical acclaim, at least so far. With its novel visual style (or should that be visual novel style), and penchant for good old survival horror, it warrants a glance or two.

Detention is a side-scrolling survival horror game and the debut of Red Candle Games, a Taiwanese indie studio. Detention is set in 1960’s Taiwan, a time when the ruling Nationalist party imposed strict martial law and crushed communist sympathizers with an iron fist. From the get-go, this gives Detention a dreary, totalitarian atmosphere, ironically similar to that of the communist regime from which the nationalists fled.

The game opens at the remote Green Mountain High School, where a student named Wei (no, not Sleeping Dogs‘ Wei Shen) wakes up to find his classroom empty and a typhoon raging outside. As he explores the school, he finds that things don’t seem quite right. All the doors are locked, the skies are unnaturally dark, and the only other person he can find is a girl named Fang.

After finding the bridge home destroyed and the river underneath surging with blood, the students return to the high school to find another way out. Most of the game is played from the perspective of Fang, who watches as her school begins to sink into some kind of dark dimension. The walls crumble with sudden decay, and horrific monsters begin roaming the halls. As Fang, it’s up to players to figure out what’s happening to the world and, perhaps more importantly, a way out of the school.

As Fang gets deeper into the school, the beasts she encounters become intertwined with unpleasant personal memories. This inexorable stew of dread drives her fears, her wits, and her determination to survive. She’ll need all of these things to make it out alive, especially with monsters closing in around her. 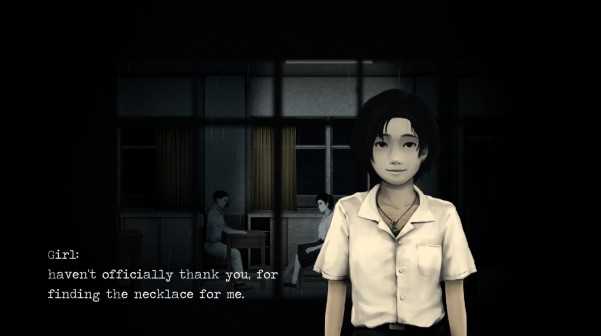 Fang is resourceful, but already has a complicated past in her teen years.

As previously noted, Detention is a side-scrolling game that blends chilling survival horror with point-and-click gameplay. When she’s not busy avoiding monsters, Fang also has to solve puzzles to access new areas of the school. Much like Amnesia: The Dark Descent, Detention‘s gameplay is informed primarily by these two mechanics: staying away from monsters, and solving relatively simple puzzles.

Because this is also an adventure game, though, Fang moves about the world in a manner true to that style. Players simply point and click to get Fang to walk around and examine objects near her. Fang can add items of interest to her journal, including items necessary to progress and non-essential bits of lore. There’s a lot lying around in the school for discerning adventurers to find.

I wasn’t kidding about the river of blood.

What immediately stands out about Detention is its gorgeous artwork. Even in a genre loaded with stylized portrayals, Detention‘s delicate character animations and richly colored backgrounds are mesmerizing. Each environment in the game is richly painted with strokes of strong colors and lots of detailed objects. It’s no hyperbole to say that each area of Detention is akin to a masterful painting. A dark, oftentimes grotesque painting, but a painting all the same.

To expand on the game’s use of color a bit more, Detention also excels at creating contrast. Part of this is due to the game’s smart use of lighting, a mainstay of decent horror design, but the game’s artists expertly balance light and dark to create some truly forbidding areas. Oh yes, the game has light in it, but don’t be relieved. Even the game’s most brightly lit areas are done out in a sallow, sour light that feels more like the stench of decay than the veneer of safety. If ever there was a study in how to do color contrast well, Detention would be an ideal candidate. 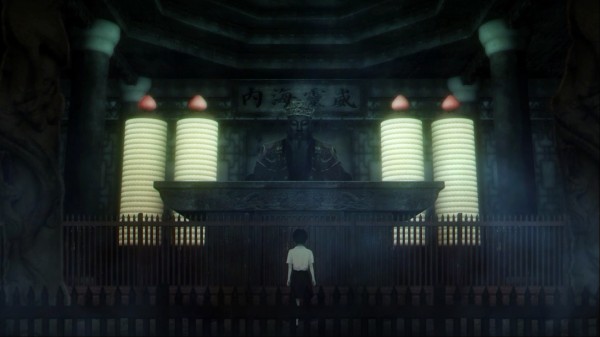 Detention‘s smart sound design compliments its artwork well. The game’s background music is a mix of low, mournful tunes decked out with traditional Chinese instruments, but even these spine-chilling songs can’t hold a (red) candle to the sound effects. Seriously, the monsters in this game sound creepy as hell, from the long-tongued demons that phase in and out of reality to the 20-foot-tall lantern monsters that sniff you as they pass. These hideous sound effects stay with the player long after the fact, too. A warning, for players averse to nightmare fuel.

The monsters and nightmare effects used in the game are drawn from obscure sources: ancient Taoist and Taiwanese traditions. Largely unknown to western audiences, the vast body of Chinese folklore has cooked up some pretty spooky stuff, at least if this game is any indication. Fang can avoid most monsters by holding her breath, but more elaborate steps might be needed for higher-tiered monsters. Everything in this game is out to kill her in a gruesome fashion, including a 10-armed monstrosity that rampages through the school. Players who become complacent at Detention‘s adventure game format do so at their peril. 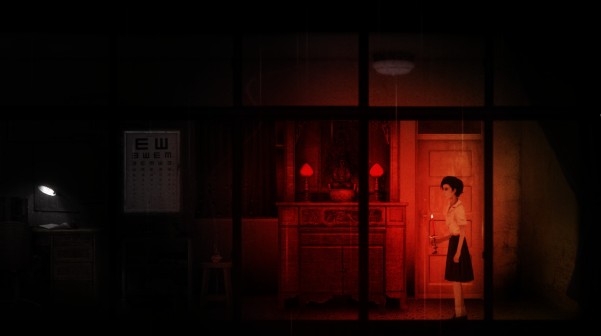 Some would argue that Detention‘s adventure game-style format precludes the more intimate horror experience provided by a first-person game, but Detention twists its format into something surprisingly jarring. Monsters popping out of nowhere is still scary from the first or third person, and Detention masters this mechanic well. Still more frightening, though, are the game’s close-up examinations of objects and items, where sudden scares flicker right before the player’s eyes.

All of this is topped off with a thick drizzle of psychological horror, as Fang’s sanity begins to unravel before the darkness of this new world. Rather than assaulting the senses with endless waves of monsters, Detention times out its monster encounters. Don’t fret, though; there are plenty of unsettling sights and sounds packed between the chases, like dice turning into bloody teeth, or grinning ghosts packed into an auditorium. The alternation between survival and psychological horror is masterfully done in Detention, resulting in an exhilarating horror experience. 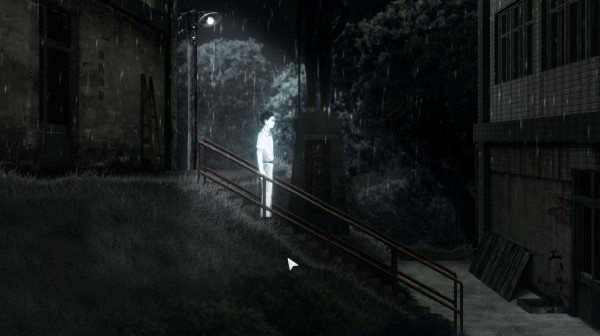 Though Detention‘s horror values are up there (like, way up there) the game is not a mere tirade of scares. The terror serves as a latticework for the game’s central narrative, one of the most gripping and suspenseful horror tales released in months. There’s a reason the world is turning to darkness, and there’s a reason Fang is at the center of it. It’s up to players to figure all of that out, but they’ll do so by exploring the stories of several colorful characters. These personal anecdotes are presented against the authoritarian backdrop of 1960’s Taiwan, making Detention‘s atmosphere even more morbid.

Detention‘s writing doesn’t suffer for the lack of voice acting. There are a few spelling errors here and there, but the story is a poetically delivered tale of vengeance and anguish. Rather than flat-out deliver exposition through dialogue, the game artfully obfuscates and leaves details vague. Not inscrutably so, but just blurry enough to leave players wondering for the entire game if what they’re thinking is actually what’s happening. That level of vagueness is a fine line to walk, but Detention‘s writing pulls it off, albeit with a few  grammar errors. Fang is a believable character, and the situations underlying the game’s viscera are similarly human. 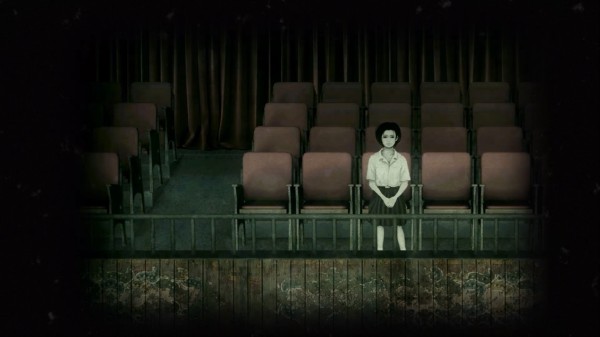 Detention has many subtle layers.

If Detention has a flaw, it’s that the game’s Chinese horror folklore and personal narrative are largely disconnected. Fang’s backstory explains some of the darkness in the game, but it never explains the presence of certain monsters. The monsters in many horror games have backstories and circumstances inexorable from the main plot, but in Detention they’re just sort of… there. The lantern specters are spooky, but they seem to have no reason to be in Detention other than to show off another facet of Chinese folklore. This situation is far from a deal-breaker, but it is rather conspicuous.

All of that said, the folklore still serves as a vehicle for some pretty gruesome horror, unrelated as it may be to Fang’s backstory. Most times, the folklore is tied up in the game’s puzzles. Most of Detention‘s puzzles are simple object-keyhole conundrums, but their level of gore sometimes surpasses the monsters’. Similarly to the narrative, the game’s puzzle clues also ratchet up tension through grim implications. 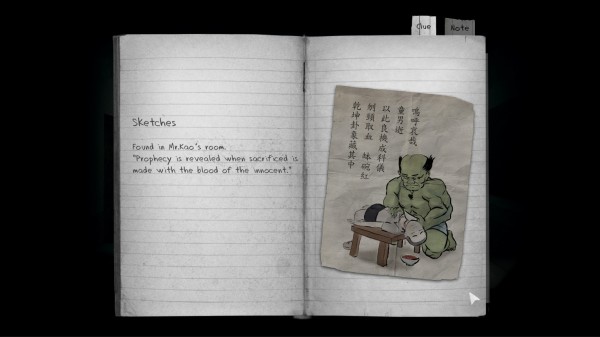 Wait a minute… what does this game expect me to do?

The aforementioned disconnect between folklore and narrative is Detention‘s only major flaw. The game is an otherwise masterful work of horror, with an atmosphere so intoxicating it still permeates the frontal lobe days after completion. All of the game’s elements, from the rich artwork to smooth puzzles to beautifully agonizing story, move as one. They produce an experience that any horror or adventure fan would be absolutely remiss to skip over. Buy it, experience it, remember it. Detention is not for the faint of heart but it’s also not for the heartless.

You can buy Detention here.