Stop a psychopath from unleashing a buried evil.

One of the reasons an older game is reviewed the Sunday after a newer game is to provide some good old retrospection. Not just in terms of game design, but to return to an era before day-one DLC. Before video games were released in a broken state. Before nearly all of the issues that tend to plague game development these days. That alone should be reason enough to risk returning to an older game with clunkier mechanics, but not all old games are clunky. No, some of them are smoother than their modern-day counterparts, even with the latter’s constant hollering about new graphics and being “truly next-gen”. One of those “smoother” titles, F.E.A.R., is an exemplar of why older games should never be forgotten.

F.E.A.R. is a horror-shooter developed by Monolith, a studio best-known these days as the creators of 2014’s Middle-Earth: Shadow of Mordor. Before penning the adventures of Talion and his romp around a suspiciously lush Mordor, Monolith crafted a series of horror-shooters that to this day are remembered very fondly by the PC gaming community. Heavily influenced by Japanese horror and the likes of Half-Life 2, F.E.A.R. was widely anticipated before its 2005 release for its grim atmosphere and emphasis on both action and horror.

F.E.A.R. is a modern-day shooter that takes place in Fairport, a fictional metropolis not unlike Resident Evil‘s Raccoon City. F.E.A.R. begins in earnest when a psychic cannibal (yep, that’s right) named Paxton Fettel arrives to the offices of the local Armacham Technology Corporation and murders everyone in the building. As if a cannibal with mind powers wasn’t bad enough, Fettel also takes telepathic control over an army of cloned soldiers ATC had bred for private military use. Fettel’s goals are unknown, but no one’s crazy about his breakout. 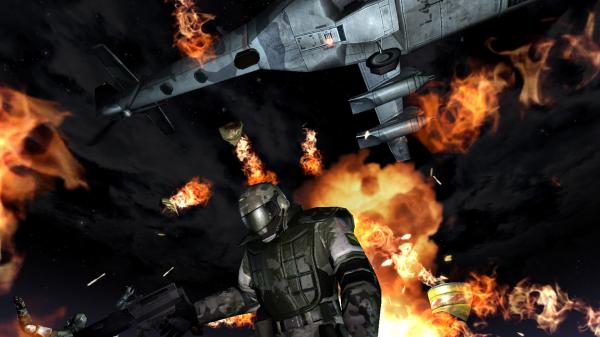 With the city in dire straits, and the Ghostbusters apparently on vacation, the federal government activates its First Encounter Assault Recon (F.E.A.R.) team, a special ops brigade trained to deal with supernatural phenomena. The player character is the Point Man, a silent protagonist who takes his name from his role in the team. Though he doesn’t speak, the Point Man excels in combat thanks to his remarkable reflexes, represented as a time-slowing mechanic within the game. The Point Man is assisted in his mission by squadmate Spen Jankowski and tech expert Jin Sun-Kwon, all of whom are intent on finding Fettel as soon as possible.

Using a satellite, F.E.A.R. tracks Fettel to Auburn, an industrial district of Fairport that was evacuated and condemned after a mysterious accident 20 years ago. Armed with the best of firearms and the quickest of reflexes, the Point Man is inserted into the gutted factories and burnt out housing projects of Auburn to find Fettel. More importantly, the Point Man needs to figure out what Fettel is searching for. All the while, the Point Man sees hallucinations of a little girl in a torn dress, who seems to be taking great interest in his progress. Surely that last one’s not real.

Time to hunt some ghosts.

F.E.A.R. is played from the first-person and is a curious exercise in combining the subtleties of a horror atmosphere with the audacity of a big-budget action movie. It also hearkens back to the shooters of the 90’s and early 2000’s, foregoing an overabundance of ammunition and health regeneration in favor of limited munitions and good old fashioned medkits. The Point Man can carry unlimited ammo but only so many health packs, and so players need to carefully consider each enemy encounter.

As the Point Man, players can wield any weapon they find lying around, from service pistols to shotguns, and use a flashlight to explore the game’s many dark areas. Though NPCs will communicate to the player via radio, the Point Man is physically alone the entire game. This setup is not only vital for crafting a good horror game; it also makes F.E.A.R.‘s more conventional running and gunning more challenging. 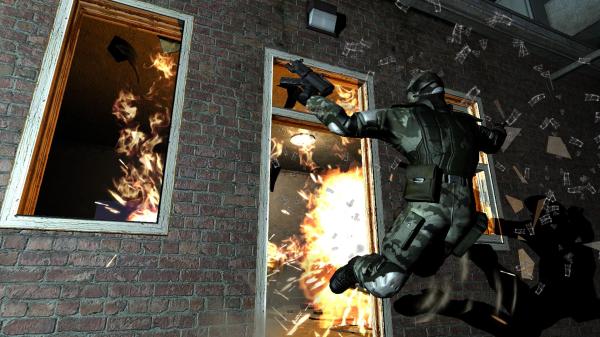 F.E.A.R.‘s gunplay is smart and fun, with a wide variety of firearms that feel quite satisfying in the hands of the Point Man. As players progress through F.E.A.R., they’ll go up against increasingly elaborate skirmishes and ambushes set by Fettel’s clone soldiers. These enemies aren’t the sharpest tools in the shed, but they’re quite dangerous, and continually introduce new combat variants as the game goes on. These soldiers can usually be heard before they’re seen, allowing players to come up with a few surprise encounters of their own. Sure, some of these encounters can have identical setups, with two levels of enemies and a path straight through their formation, but all the guns and explosions preserve the entertainment factor. Plus, there’s nothing better than activating the Point Man’s slo-mo ability and popping off a round of headshots.

The other component informing F.E.A.R.‘s gunplay is the game’s unpredictable pacing. Some levels pack encounters against Fettel’s troops every five seconds, while others might have just two or three battles. This inconsistency is great for a horror game, because it keeps players guessing when clone soldiers might be just around the corner. Combine this with the Point Man’s occasional glimpses of the aforementioned ghost child, and the result is deliciously tense. Not since the Ravenholm level in Half-Life 2 have mid-2000’s first-person shooters felt this creepy.

I don’t suppose telling them to execute Order 66 would do anything?

Hand-in-hand with F.E.A.R.‘s satisfying shooter gameplay is its varied level design. While the gameplay of F.E.A.R. is classically shooter, the level design is classically horror. In order for the Point Man to get to the action, he has to traverse miles of gutted buildings, dark hallways and abandoned offices first. These environments are maze-like, almost labyrinthine, and it can be easy to get turned around. This setup is perfect for any game attempting a grim, forbidding atmosphere, as the Point Man navigates past upturned furniture, blood stains, and other telltale signs of a situation gone horribly wrong.

Even though the transitions from corridors to skyscrapers to laboratories is a welcome way to keep things interesting, F.E.A.R. could’ve used a few more texture and color palettes. For all their variety in paths and elevations, this game’s environments blend together pretty incoherently, with a small handful of samey textures spread over way too many levels. The physical design of each level guarantees a measure of interest, but it becomes impossible to distinguish one block of tan cubicles from another after the Point Man has seen one for the umpteenth time. The textures look remarkable for a game that came out in 2005, but more visual variety atop the level design would’ve made the game more compelling.

Please choose something besides gunmetal grey. Even if it’s just every 10th warehouse, that would be great.

Though the texture variety in F.E.A.R. needs work, this game looks quite impressive despite being 11 years old. The character animations are surprisingly smooth, and the game has some beautiful light and shadow effects. Like any developer seeking to make a good horror game, Monolith understood that the interplay between light and shadow is crucial to creating tension. Even the game’s most brightly lit areas are lit dourly, with lots of flickering lights and pitch-black rooms to round out the spooky.

Further reinforcing the atmosphere is the game’s haunting soundtrack, a mix of low sounds that can make the skin crawl. Monolith also got quite creative with the game’s sound design, mixing startling noises with equally startling visuals. The ringing cell phone inside the bloody ceiling is one such example of a game that uses audio to lure players into unpleasant visual ambushes, and it’s a brilliant setup. Not all of F.E.A.R.‘s audio visual gimmicks are brilliant, though. The game supports modern resolutions, but every single piece of text in the game is, like, a 5-point font. It’s not clear why F.E.A.R.‘s in-game text is so tiny, but just a heads-up; it’s tiny. 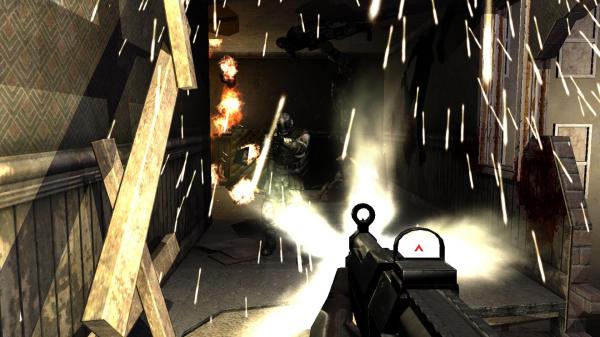 Hey! I need you to read me something when we’re done!

The plot at the center of all these lights and shadows is serviceable, if a bit too compacted. For one thing, F.E.A.R. is divided into way too many levels. Each one takes little time to do and begins and ends with the exact same prompt: find Paxton Fettel. Indeed, nearly every mission has that exact same objective, and if that’s the case, why put a mission screen there at all? It’s a relic of a bygone era of game design, to be sure, but it’s also quite conspicuous. Didn’t find Fettel in this level? Well, don’t worry! Guess what’ll happen in the next level?

Additionally, most of the dialogue in F.E.A.R. revolves around military tactics and acronyms. Get this dude. Bash down this door. Empty a clip into that bad guy. And boom, we’re Oscar Mike! The game does feature some exposition, but it’s all compacted into voice mails and laptops that the Point Man finds lying around. Sure, they contain some interesting information, like how Fettel might be trying to free a woman rumored to be imprisoned beneath the Auburn district, but many of the conversations on these machines feel repetitive. Additionally, not a single one is an essential objective, so players have to go out of their way to find exposition instead of having it just woven into the narrative. None of this is to say that the narrative F.E.A.R. has isn’t interesting, but its delivery is ham-fisted. There’s also not much character development to be had, as the Point Man is a silent character and NPCs go as quickly as they chime in.

Do you guys feel like telling me where your boss is? No. Alright then.

Some of the scares in F.E.A.R. can also feel unfair, in that they’re mostly jumpscares. Until the Point Man reaches the innermost depths of the Auburn District, the scares he encounters are cheap illusions that disappear as soon as they provoke a jump. Every so often, the Point Man will get jumped by something genuinely scary: a mute special ops clone ninja thing, but these encounters are rare indeed. F.E.A.R. creates sufficient terror in its level design, but Monolith wasn’t confident enough in this to not conjure some cheap tricks on top of it.

Not to worry, though, because F.E.A.R.‘s well, fear, becomes more pronounced in the two expansion packs bundled along with the main game. The first, Extraction Point, continues the Point Man’s fight to get out of the Auburn district. The second and far superior pack, Perseus Mandate, expands the lore of the F.E.A.R. universe and pits a new player character against a new enemy faction. Extraction Point doesn’t contain much to write home about, least of all the abject lack of modern resolution options, but Perseus Mandate contains much better writing and dialogue. Both expansion packs are worth playing for the satisfying gunplay. Monolith doesn’t consider either canon, as their development was outsourced to Vivendi, but hey; they’re still fun to play.

Hey! He owed me money!

Even though F.E.A.R.‘s narrative is too tightly condensed and its levels can get a bit repetitive, it remains one of the 2000’s most criminally underrated shooters. Horror and action fans alike should pick this up immediately, as its intoxicating atmosphere and full, satisfying gunplay evokes the best of both genres. The expansion packs, despite being made outside of Monolith, faithfully follow the main game’s blueprint in offering a mysterious, visceral gameplay experience. F.E.A.R. may not always understand the true meaning of horror in a video game, but it scratches enough of that itch to be worthy of any thrill-seeker’s time.