Race to save thousands of lives from a vicious Zerg attack.

Holy moly. The 2016 holiday season actually produced a well-optimized PC game. Watch Dogs 2, no less! In a rare showing for an otherwise dismal holiday season, a major publisher managed to produce a game that not only ran on its opening day, but runs quite well. Ubisoft is the unexpected savior in this situation, but let’s be fair, the year 2016 has been full of unexpected situations. Unfortunately, I had already given up on the prospect of Watch Dogs 2 being any good (the first one is not good) but we’ll still have a good time. Why? Because it’s time to return to one of gaming’s proudest sci-fi universes, and the continuing saga of Nova Terra.

After this spring’s release of StarCraft II: Legacy of the Void, the single-player saga of StarCraft II pretty much ground to a sudden, albeit satisfying, end. The game’s multiplayer ecosphere continues to rage with battles between Terran, Zerg, and Protoss, but the grand narrative of Kerrigan and Amon does not. Wanting to keep players invested in the StarCraft universe’s story, Blizzard released the first of three planned mission packs back in March, starring the psionic operative Nova. Nova may not have gotten her third-person shooter debut in the cancelled StarCraft: Ghost title, but Blizzard kept her around for their subsequent titles, and now she gets her own series over a decade later.

Set years after the events of Legacy of the Void, the Nova Covert Ops mission packs chronicle Nova Terra’s journey to defend the Terran Dominion against a new, human threat. The first set of missions saw Nova escape from the Defenders of Man, as they’re called, and take command of an elite black ops regiment to hunt down and destroy the dissenters. The mission pack sported a novel blend of the usual strategic gameplay that StarCraft II is known for, but also featured isometric, Diablo III-style stealth missions in which Nova sneaks around enemy bases ad furtim. Well, Nova finds out that the Defenders of Man are luring the alien Zerg to human worlds to make the Terran Dominion look weak. The second set of Nova Covert Ops missions opens as our heroine races to the Defenders’ latest target, to try to save thousands of innocents from overwhelming Zerg forces.

Nova is intent on stopping the Defenders’ latest scheme.

Even as Nova fights to defend innocent civilians from the Zerg, she and her loyal spymaster Riegel fight to discern the identities of the Defenders’ leadership. Whoever they are, the group seems to think that Emperor Valerian Mengsk is too weak to lead humanity effectively in the Koprulu Sector, and seeks to discredit his reign by luring Zerg to heavily populated worlds. They can then take the credit for swooping in and saving the day, humiliating the Dominion. Nova spent some time prior to the events of the game working for the Defenders, albeit while brainwashed, and struggles to remember anything useful about them.

As Nova sets about defending cities from Zerg attacks, she receives an unexpected visit from Alarak, leader of the Tal’darim Protoss and by far the most interesting character from Legacy of the Void. Alarak also wants the Defenders of Man destroyed, and offers to strike a bargain with Nova: lead him to their base, and he’ll help her uncover her lost memories. Nova senses little good in trusting Alarak, but, much to his delight, agrees to help him. Hoping that she can trust the Tal’darim, Nova embarks upon a new leg of her journey aimed at defending the innocent from the Defenders, and then striking back against them. All the while, she’s left wondering if Alarak can be trusted.

Alarak returns in Nova Covert Ops to gleefully bargain with Nova (much to her chagrin).

Like the previous pack of Nova Covert Ops missions, Chapter 2 comprises a set of three levels with varying challenges and gameplay. Unlike the more furtive level design of the first pack, the second pack boasts sprawling battlefields much more reminiscent of the main StarCraft II campaign. Nova and her covert ops regiment are forced to emerge from the shadows to fight hordes of feral Zerg, and be ready for anything that Alarak might have up his sleeve.

The two most noteworthy elements of Chapter 2‘s mission design are their mission variety and fealty to the design of the main game. Nova is thrown into some of StarCraft II‘s most chaotic situations with this pack of missions, from fighting off waves of Protoss and infected Terrans simultaneously, to actually being forced to protect a Defenders of Man base. Chapter 2 also features a mission set on Antiga Prime, which old school fans will remember as a turning point in the original StarCraft‘s Terran campaign. Indeed, though the gameplay in Chapter 2 is much more familiar than the stealth missions of Chapter 1, it forces players to contend with multiple enemy factions and side mission opportunities that must be acted upon quickly.

Even though the gameplay in StarCraft II is more visceral than most missions in the main game, that didn’t stop some of them from feeling a bit derivative. The first mission pitting Nova against Zerg, Defenders of Man and the Tal’darim is a pure strategy thrill ride, but the next level is essentially a repeat of the race to gather Terrazine from StarCraft II: Wings of Liberty. Just like when Jim Raynor descended upon the planet Bel’shir, Nova has to gather gas and prevent Protoss from destroying it. Sure, the level throws in some infested Terrans for good fun, but these creatures fare poorly against most anything players can field. The last level is a good ol’ one-on-one brawl against feral Zerg, but it lacks enough novelty to make it stand out from all the other Zerg brawls out there.

These level design inconsistencies are due in no small part to the near-total lack of isometric stealth missions. Whereas Nova’s solo sneaking comprised most of one level and half of another in Chapter 1, Chapter 2 only features two small, optional stealth vignettes within a single level. It’s a bit weird to see a miniseries that built itself up on covert ops revert solely back to grand tactics. The stealth in Nova Covert Ops is a bit clunky, but it’s in keeping with the mission packs’ black ops theme. Hopefully these jaunts into sneak-land make a comeback in Chapter 3. 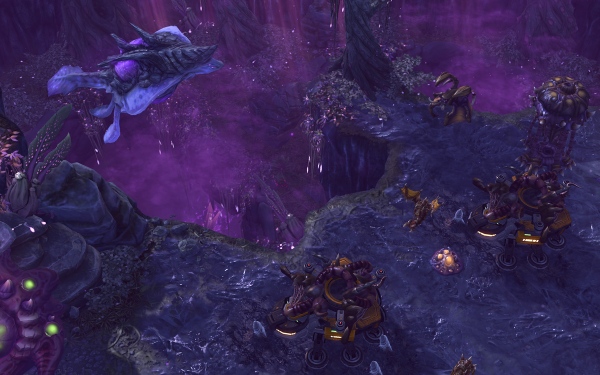 The missions in Chapter 2 do a surprising about-face back to conventional StarCraft gameplay.

Luckily for the gameplay, Nova returns with the ability to upgrade her units and suit for different playstyles. Unlike the human upgrades in Wings of Liberty, these pieces of tech come free, but each one can only be assigned to one type of unit at a time. Most upgrades make it easier to employ special tactics in StarCraft II or bump up certain stats to tilt the scales in the player’s favor. The Marines’ rifle extension and the Goliath’s biosteel upgrades are both must-haves for the conniving black ops spymaster.

Even though the unit upgrades in Nova Covert Ops remain cool as ever, the same cannot be said for all of the mission pack’s units. The Viking walker/fighter is swapped out for a new contraption called the Liberator, a supremely clunky unit that can attack air targets while mobile, but must become stationary to do anything else. It’s alright as a mobile turret, but not having the transforming Viking walker? Come on! That thing would be the epitome of black ops badassery. Alas, there are no Vikings in this cosmic longboat.

The art and level design in Chapter 2 remain as impressive as ever for a StarCraft II campaign. Each level has good terrain variation and plenty of tactical opportunities for the discerning space commander. Choke points are the name of the game in this mission pack, although constant attacks from enemy forces make building bunkers and turrets a challenge. Visually, the mission pack continues StarCraft II‘s proud tradition of sharp animations and big, colorful environments. The tropical city planet in the first mission is a refreshing change of pace from the gritty environments Nova traversed in Chapter 1, although the pack goes right back to those for the second and third levels.

The narrative that all of this informs hits a more admirable high than what Chapter 1 was starting out with. The race to defend the Terran Dominion takes a sinister new turn with the Tal’darim’s involvement, and Alarak’s sharp, condescending wit is a welcome addition to a story packed with stony-faced humans. Nova herself undergoes little character evolution, but does suddenly display a regard for human life that was ambiguous until this point. It’s just too bad that she spends every waking moment of this mission pack taking orders from Riegel, who seems to telepathically know every hidden item and every best tactic around. That’s a spymaster’s job, to be fair, but Nova never takes any initiative. Only orders. Isn’t she supposed to be in charge of this mission?

Nova’s character development is stymied by writing that favors the convenient inventor sidekick over, say, the heroine.

Chapter 2 omits a few key notes, but it increases the overall value of Nova Covert Ops and adds some more mystery to a galaxy that’s become a bit devoid of it. It returns this miniseries to classic StarCraft level design, but remains fun despite giving up Nova’s stealth missions. It also turns up the narrative by adding mystery and suspense rather than high drama, and finds creative ways to streamline the Tal’darim and other StarCraft II tidbits into its narrative. Core fans and real-time strategy enthusiasts will enjoy this mission pack immensely. Hopefully Chapter 3 will reincorporate the stealth missions and the best of both packs.