Elude a monster that’s broken into your home and take a survey on how that makes you feel.

Just because November is the biggest release period of the year for big-budget games doesn’t mean that the small-budget ones shouldn’t have any say. Indie games are keeping this industry innovative, so to say that the public square belongs exclusively to high-selling but low-innovating titans (*cough*Battlefield 1*cough*) is a bit unfair. With that in mind, it’s time to take a break from this winter’s deluge of Triple-A games in favor of something smaller but more innovative than its gargantuan peers. Plus, we haven’t reviewed a horror game in forever. Luckily, The Survey contains both innovation and horror.

The Survey is a first-person survival-horror game created by Robert Gammon, a man whose understanding of subtlety and attention to detail makes his game stand out from the hundreds of other indie horror games released on Steam. Every horror gamer knows that about 95% of the horror games released on Steam are complete garbage, comprised of hastily thrown-together environments and a few cheap jumpscares. The Survey is neither of these things and more, so inveterate horror fans who get weary of wading through dozens of cheap, crappy games need not worry here.

The Survey takes place in a 13-room townhouse from which there is no apparent escape. The game begins as the protagonist, a nameless man, wakes up in the middle of the night to an alert from his smartphone. He’s to complete a strange survey that asks him some very specific questions, like if this house seems familiar and if he remembers having a family. As his phone prattles on about how he’s feeling and where he is, the man leaves his bedroom and gets out into the house to see what’s going on. Disturbingly, the phone keeps asking him if he sees anyone or is expecting company at this hour.

As the man begins exploring his house, he starts finding notes about a family called the Walkers, a pair of working-class parents with two children. Their daughter Lilith demonstrated an incredible affinity for painting at a very young age, leading the parents to abandon their day jobs and ride the money that their child brought in. All of this was done at the expense of the couple’s son, Marcus, whom they abused to coerce their daughter into painting more pictures. The man has no memory or connection to this story, despite his phone prompting him about it.

After exploring the house a bit and finding more inklings about the Walkers, something breaks into the man’s house, and damn if it isn’t a terrifying sequence. After departing his bedroom once more, the man begins to find items rearranged around the house, more notes scattered around, and what sounds like crying coming from downstairs. He also seems to be getting tailed by the large porcelain doll that was supposed to be sitting near the sofa. Whoever’s texting the survey to him seems aware of what’s happening, though the answers the man puts into his phone, if he chooses to, seem to have no bearing on what’s happening in the house. 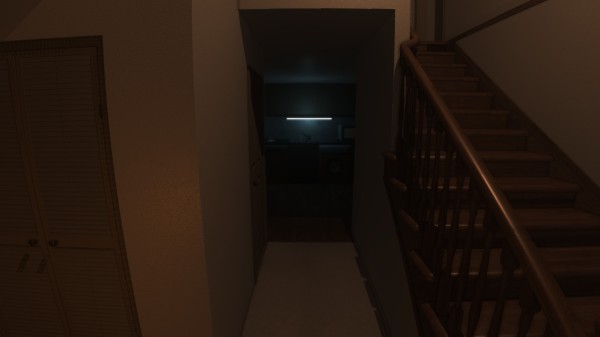 The most immediate facet of game design separating The Survey from its peers is its sheer beauty. Though the game environment of The Survey is not that big, each room and area has been well-rendered and immaculately detailed. There’s a surprising amount of color and texture in the game, yet it all conforms to the realistic setting of a townhouse. It’s not meant to be a visual feast, but Gammon did a good job replicating a commonplace environment with flair.

The other element Gammon nails in his game design is lighting, one of the most important elements to a great horror game. Much of the house is drowned in darkness, but even turning the lights on doesn’t do much to dispel the gloom. Most lights are soft but dim. They light up the house, but only by the bare minimum amount of light needed to make out environments. Everyone turns lights on when they get scared, but Gammon has succeeded in creating a lighting scheme that does nothing for the player’s sense of safety.

The lighting in The Survey doesn’t do much to calm the nerves, and that’s a good thing.

Although some players might chafe at the idea of an entire game taking place in a small townhouse, the constricted environment is perfect for a horror game. The entire 2-3 hour experience takes place in a two-level townhouse with just 13 rooms. Some might wonder if that’s enough space to execute a horror game, but the lack of space also means lack of places to feel safe or take refuge. A horror game is at its best when it keeps players guessing and extremely apprehensive, and The Survey accomplishes just that with its relative lack of places to hide. There are closets and other spaces strategically spaced throughout the house, but the house is small. Can the protagonist reach them before he gets got?

Gammon manages to keep the environment feeling fresh by introducing some subtle (and not so subtle) changes as the game goes on. The aforementioned creepy porcelain doll will sometimes block access to different parts of the house. Blood smears and rearranged furniture re-contextualize old areas. Even though The Survey‘s physical environment is small, more is done with that environment than with many games 100 times its size. 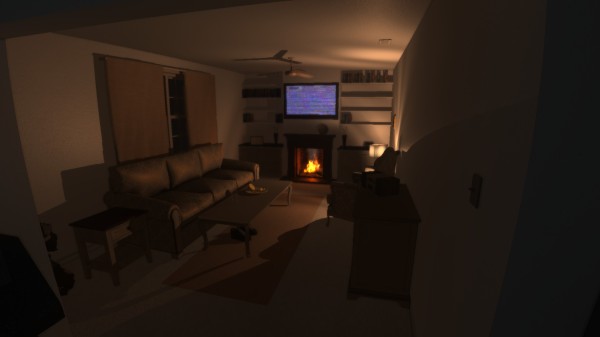 Who turned on the TV?

The small size of The Survey‘s game environment is also reflected in its gameplay. The protagonist cannot run for fear of tripping down stairs or alerting the monster, so players are forced to creep through the apartment at a slow pace. It feels a bit agonizing sometimes, especially when going down hallways, but most environments in this townhouse can be reached quickly enough that not being able to run isn’t an issue. It becomes a bit more of a problem when the monster shows up, but The Survey doesn’t allow players to simply run away from the problem. Survival in this game demands an eye for detail and some strategy, like tagging closets to hide in in case trouble shows up. Besides, where would the leading man run, anyways? The front door is sealed shut.

Aside from being careful about how he moves around the environment, the mystery man may be prompted by the survey or in-game items to complete certain puzzles. These conundrums are hardly challenging, forcing the player to trade only a few iotas of brain power for much bigger crumbs of narrative. Occasionally, strange voices from the radio will pipe in to fill in the story where notes and in-game puzzles do not. It’s an effective mix of storytelling elements, and if the player gets stuck, their smartphone will relent with a hint on how to proceed every 10 minutes or so.

I am NOT going up there…

So what exactly is this exposition that game puts players through their paces for? What is this mysterious place and how does the main protagonist connect to it? Most of the exposition and narrative throughout the game connects back to that aforementioned family with the talented little girl. Everyone knows that stories like this aren’t brought up unless they have some bearing on the story, so it’s safe to assume that the leading man has some connection to the Walkers.

Ultimately, The Survey‘s central narrative is a tale of intense family dysfunction, and how that dysfunction can have lasting impact on everyone in the family. It’s a subtle yet heart-wrenching tale, one that gamers with family problems of their own may find depressingly familiar, but it’s told with a steady hand that reveals the truth at a steady clip. Gammon’s a good writer, despite his prose’s occasional spelling error, and the story he unfolds is delivered from the perspective of each sibling in the Walker family. The game’s central theme is that everyone gets what he or she deserves, and it’s refreshingly consistent.

We’re all just shirts on a shelf built from LIES….

The other character who bears a possible connection to the Walker family is the monster herself, a gaunt, weeping widow that wanders the house in search of… something. You? Herself? It’s not made clear at the outset and only haltingly more so as the game progresses. There’s the usual chase sequences and hiding seen in such greats as Amnesia and Outlast, but Gammon isn’t afraid to employ some psychological horror as well. The monster will try to trick players into its embrace, from sounding like a scared little girl knocking frantically at players’ bedrooms, to sitting in the closet until the protagonist passes down the hallway. Sometimes the monster isn’t apt at spotting the player when they’re right close by, but the townhouse is so constricting that this error rarely happens.

The combination of visceral house-searching and devious psychological tricks makes this monster absolutely terrifying. It’s also quite difficult to get a good look at it, because Gammon understands that a monster stays scary the less frequently one sees it. Fear of the monster is what extends a game in such a small environment to vastly bigger lengths. One never knows when this thing will round a corner in hot pursuit of your jugular.

The Survey is uncommon among low-price indie horror games in its emotional brevity and attention to detail. It is a very patient game, trusting players to get scared by the environment and the morbid atmosphere instead of cheap jumpscares that YouTubers can obnoxiously overreact to. It’s consistent in its themes and storytelling, and is worth suffering through a few bugs and spelling errors in order to suffer through the terror. For five bucks, all of this is not a bad deal. Players can get a well-crafted narrative about the tragedy of family dysfunction and one of the most visceral survival horror experiences of the year rolled into one game. Horror fans will want to pick this up immediately. As for Robert Gammon, his budding career as a horror game developer bears watching with great interest.

You can buy The Survey here.