Rule the streets and the underworld in a take on classic crime.

The time for niceties is over. The reprieve from Lethe – Episode One is over. Everyone’s had their fill of comedy from South Park: The Stick of Truth, and of serenity from Abzu. It’s time to descend back into what video games do best: visceral narratives and an astonishing amount of violence. With those two objectives in mind, Mafia II is an obvious choice for this week’s Sunday review. Although, it might contain a bit more class than either of those points would imply.

Mafia II is a period crime thriller set in the 1940’s and 50’s. Like so many other video game crime-fests, it’s an open-world game with lots of guns and lots of violence. Unlike those other games, Mafia II places its emphasis on narrative rather than the absurdities of open-world gameplay. Not to say that GTA V doesn’t have a decent narrative, but let’s be fair; there are a billion Youtube videos of GTA stunts for every one video offering a plot analysis.

Mafia II follows the life and times of Vito Scaletta, an Italian-American pretty-boy who moonlights as the human incarnation of trouble. Vito starts out from humble beginnings as the son of impoverished Sicilian immigrants, but rather than ascend the criminal ladder as most rogues do in these games, he takes a baseball bat to it. It’s a refreshing deviation from the path-to-glory archetype prevalent in Grand Theft Auto and Saints Row.

Vito is the protagonist of Mafia II.

Vito spends his formative years on the streets of Empire Bay, a fictional metropolis that combines the best, and worst (mostly the worst) of Chicago and New York City. After getting busted for robbing a jewelry store, Vito endures a brutal stint in the Italian campaign of World War II, working as a soldier and translator for the U.S. army. When he’s sent home to recuperate from taking a bullet, Vito meets up with his old buddy Joe Barbaro, who uses his “connections” to honorably discharge Vito from the military. He’s a free man once more.

Initially intent on making an honest living, Vito is hamstrung by the hardships of living in Empire Bay. It doesn’t help that his family got in deep with some loan sharks during his time away, and the prospect of solving his problems via a day job becomes less and less realistic. Before long, Vito comes knocking on Joe’s door to meet the “friends” who sprung him out of the military, and embarks upon a dark, bloody journey to make something of himself… no matter the cost. 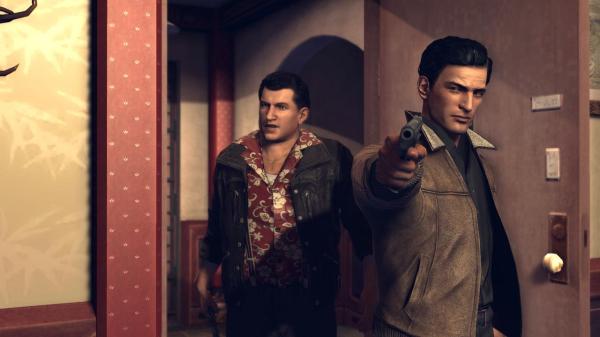 Vito and his buddy Joe (pictured left) start getting into capers of their own.

Mafia II doesn’t contain any gameplay that GTA or Saints Row fans haven’t seen. Players are presented with an open-world metropolis across which narrative and chaos are pursued in equal measure. Players can customize Vito with different outfits unlocked or bought throughout the game, and arm themselves with a riot of mid-1900’s weaponry. All of Empire Bay is open to Vito from the outset. The city largely remains the same, sans seasonal weather and a few… landmark changes.

Anyway, Vito and Joe set out to make a quick buck before too long. Vito became skilled at killing Italians during the war, and Joe’s mob buddies send the duo out to do just that. Vito also earns cash on the side selling extra ration stamps and breaking into public buildings. He’s hesitant, at least at first, but quickly jumps into the ways of the Mafioso to help his family as much as to make money. Besides, it’s not like he got the chance to learn any other skills.

Oh, that guy? Nope, never met him. Probably just had a gas leak.

So wait; if Mafia II is so edgy and cool, how come it’s not more well-known? How come it’s not as popular as the games that it’s proclaimed to surpass? Well, admittedly, Mafia II‘s gameplay is exceptionally ordinary. It’s a perfect amalgamation of all the generic cover-based shooting that’s saturated this industry for years. Vito and Joe equip their guns, and slowly mosey through a corridor of chest-high walls until they’re the only ones left standing. Take too many hits, crouch down to regain health. None of this is bad, per se, but it’s certainly nothing that even casual gamers haven’t seen before. Aim the gun, fire the gun, rinse and repeat until all is quiet. The combat can be a bit challenging, especially since Vito only typically wears suits, but hiding behind a wall to regenerate will solve that problem in a cinch.

The other element endemic to the open-world crime-fest, cars, is about the same. Vito can drive all sorts of stylish rides straight out of the 50’s, but even for cars of that era, they handle like bathtubs. Worse still, Vito can’t shoot from the driver’s seat, meaning that he can only ever ram other cars if Joe’s not riding shotgun. Getting away from the cops can be a hassle, especially since the cops in this game are actually fairly smart. Players can’t just walk around with weapons out or even drive too fast without catching the cops’ attention. It can be frustrating at first, but the mechanic ultimately teaches players to be subtler, which is when Mafia II becomes really enjoyable.

The narrative that’s being underpinned by all this gameplay is substantially more interesting than the shooting or driving mechanics. For one thing, the voice acting in Mafia II is absolutely top-notch. In an industry inundated with “professional” voice artists who can’t even emote properly, it’s refreshing to find that some people haven’t forgotten how to speak with emphasis. Robert Costanzo, Joe Barbaro’s voice actor, is easily the standout performance of the whole bunch, making Joe one of gaming’s best sidekicks. There’s little negative press for even the game’s minor characters. Everyone knows their role and sticks to it, much like when lying to the cops about the “accidental” shooting behind the bar.

This, in turn, lays the groundwork for several compelling character arcs. Vito goes from unsure rookie to unhinged rebel at a steady clip over the course of the game. Each character has his or her own subplot in relation to Vito’s major goings-on. Vito and Joe evolve in response to each other as well as the game’s driving plot. Mafia II has some exceptional writing for a video game, writing that, when combined with the voice-acting, puts Mafia II‘s plot on par with the best silver-screen Mafia flicks. Maybe not The Godfather… but close.

Ultimately, what makes Mafia II‘s story so good is that it’s a tragedy. Most crime games are pretty simplistic in their portrayal of opportunistic rogues. Some desperately uncomplicated protagonist shows up, kills a bunch of people, bags a ton of money, and rules over Los Santos or Steelport from that day forward as king incarnate. Not in Mafia II. Sure, the player will get tons of money and even more kills, but like the ultimate arc of The Godfather films, Mafia II seeks to portray the forsaking of Vito’s humanity. He’s a complicated character motivated by emotions evil and benign, but not even his skill with a gun can keep the criminal world at bay. Mafia II‘s most endearing motif is that, no matter how many enemies are killed and money is bagged, the violence and sadness never goes away. Never gets old. Violence and sadness are as much Vito’s companions as Joe Barbaro.

Gamers and nerds who enjoy highly political universes will also find something to enjoy with Mafia II, as Vito and Joe become drawn into the mob’s hold over Empire Bay. Mafia II offers fascinating insights into the culture of Italian-American organized crime, with actual rules and rituals represented in the game. There are three mob families that uneasily coexist in a fragile peace, to say nothing of the black, Jewish, Irish and Chinese gangs also running rampant in the city. Vito and Joe will eventually encounter almost all of them, becoming intimately familiar with the lore of their own mafia in the process.

Empire Bay. Where the people are… enthusiastic.

Mafia II‘s well-written and well-paced story is enmeshed into a luxurious 1950’s set piece. Empire Bay is leagues and fathoms smaller than other open-world metropolises, but that doesn’t make it suffer for lack of character. The city is decked out in period decorations and advertisements. Some of the scenery can look repetitive; pretty sure a few city blocks were straight up copy/pasted; but, it’s far from a big deal. The visuals have aged a bit since 2010, but the character models are animated well enough to get their points across, and the lighting and shadows are decent. Good enough.

Mafia II also benefits from period sound design, including legendary songs from the times that can be heard throughout the city or on the radio. Mafia II offers its own take on ironic, satirical radio, by presenting a DJ who spins off falsehoods that decades later would be proven false. It’s a clever way to exploit the attitudes of the 1950’s while also allowing for a few laughs. With a story this dark, laughs may be sorely needed. 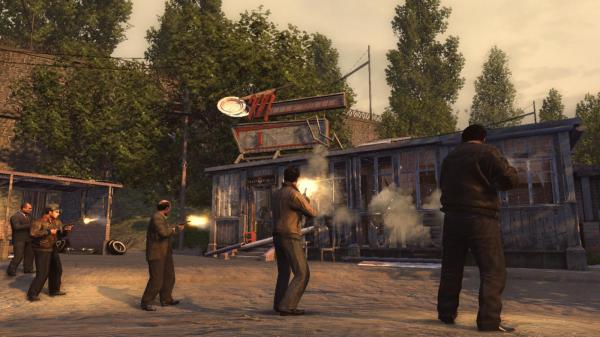 There’s very little bad to be said about Mafia II. Its gameplay is basically a refurbished version of the generic cover-based shooter formula, but its narrative is the best of any open-world crime game, even Grand Theft Auto V. It’s refreshingly bug-free, and it runs very well on contemporary systems. Anyone who enjoys open-world mayhem and gritty narratives will want to pick this one up, especially with Mafia III due to drop in early October. Mafia II may not have the world’s most memorable gameplay, but its believable characters and strong story leave a much more lasting impression.

You can buy Mafia II here.