Take on the galactic empire as a rebel X-wing pilot.

As I continue to explore games outside of my conventional genres, I find myself returning to a childhood joy: flight simulators. Before my primary interest in gaming was story, flight simulators were a great way to live out my childhood dream of being a TIE fighter pilot. You read that right. I enjoyed the Star Wars flight simulators released throughout the 90s, from Tie Fighter all the way up to today’s game: X-Wing Alliance. Like so many classic games, Star Wars: X-Wing Alliance was recently re-released on Steam, and I’ve decided to take it to task. How does it compare to games like it today, and would it prove compelling to a contemporary audience?

Star Wars: X-Wing Alliance is a flight simulator that casts players as a pilot in the Rebel Alliance. Ace Azzameen, the game’s silent protagonist, starts off running jobs for his family’s shipping business but eventually gets sucked into the Alliance’s fold. Players can pilot various rebel craft in their tours of duty, and a host of other ships on missions for the family.

In its heyday, X-Wing Alliance was regarded as both an excellent Star Wars game and a great flight simulator. I haven’t paid much attention to subsequent developments in the latter genre, because they tend to be very dry games that have absolutely no narrative. My standing on how this game compares to modern flight simulators is thus compromised, but the general idea of taking off in some sort of craft and flying from point A to point B still seems to be the norm. X-Wing Alliance is no different.

The nice thing about X-Wing Alliance is that it does have a narrative, otherwise I probably wouldn’t be talking about it. The game is set between The Empire Strikes Back and Return of the Jedi, and its principle cast of characters is a shipping family who try to stay neutral but are eventually forced to pick a side.

The narrative begins when Ace’s father Tomas returns from delivering goods to the Rebel Alliance, a mission that divides the Azzameen family between those who want to help the rebels and those who want to avoid incurring the wrath of the empire. It is against this backdrop that players learn the basics of the game, aided by Ace’s older siblings Aeron and Emon. Aeron is the stereotypical sarcastic older sister. Emon cracks the occasional joke, and has an Irish accent for no apparent reason.

The Azzameens are sympathetic to the rebel cause but don’t want to bring the empire knocking on their door.

After running a few deliveries for the family business and facing off with the rival Viraxo Industries company, Ace barely survives an imperial ambush and half of his family is killed. The surviving Azzameens escape the empire’s seizure of their business and seek asylum with the rebels. While Aeron and Emon are left to pick up the pieces of the family company, Ace decides to enlist with the rebels as an X-wing pilot. He’s a silent character, but I would imagine anyone in that situation would be eager to blow some imperial shit up.

With the family mission tutorials behind Ace, players join a Rebel squadron and spend most of the rest of the game hitting Imperial targets. As a general rule, most missions involve a few dogfights with TIE fighters, and blowing up one imperial station or another. Officially, your designated craft is a rebel X-wing, but you can pick whatever starfighter you want for the battles ahead. 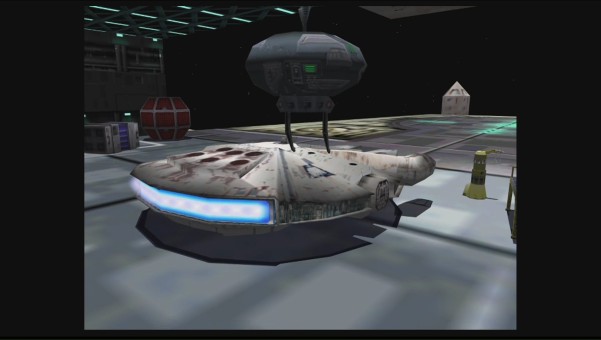 The more missions you complete, the more spacecraft will be open to you.

Most missions in X-Wing Alliance are flown for the rebellion, but the family still needs your help setting the business back up. During his down time, Ace hops into one of the Azzameen YT-1300 freighters and undertakes missions with his siblings. Occasionally, missions for the family and the rebellion will happen within close proximity of the same objective. You could spend one mission as an X-wing pilot, attack an imperial communications channel, but then return the next mission as an Azzameen to hack the facility. It’s a small detail, but the balance of rebel and family missions keeps X-Wing Alliance feeling fresh.

Most missions in X-Wing Alliance are completely unrelated to the events of the films. You spend most of your time foiling nefarious imperial plots that aren’t elaborated on in the original trilogy. From finding and killing imperial spies to stopping a fleet of remote-controlled TIE fighters, X-Wing Alliance‘s tours of duty all revolve around stopping imperial weapons projects. Toward the end of the game, the focus shifts toward preparing for the Battle of Endor. 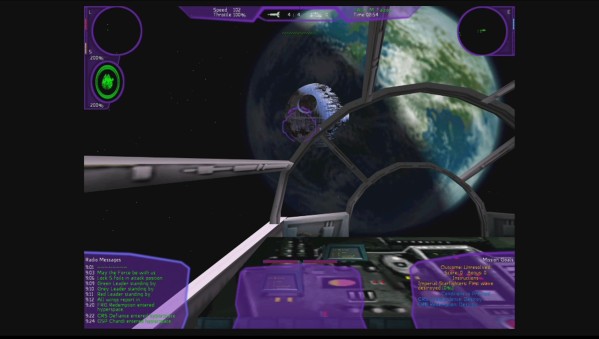 X-Wing Alliance does not skimp on any of its flight simulation content. The tutorial marches you through an army of buttons used for picking up and dropping cargo and adjusting speed. Don’t worry; it doesn’t take too long before you start shooting at enemy craft. I was impressed with the breadth and depth of X-Wing Alliance‘s attention to flight simulation, though many gamers might find the sheer amount of options a bit much. Most times you’ll be fine as long as you know where the laser cannon and throttle buttons are, but a few missions do require pulling off some tricky maneuvers.

X-Wing Alliance missions are not difficult to understand. After picking a craft, you’ll hyperspace off to where the action is. Dogfighting against enemy ships is easy because the artificial intelligence in this game is… we’ll just say basic. As in, enemy TIE fighters will fly in a perfectly straight line even if you’re shooting the seat out from under its pilot.

Apparently the empire is hiring crash-test dummies as TIE pilots.

Eventually, a few enemy craft will lock on and try to take you down, but they have a hard time comprehending any flight plan more complicated than straight lines. Alternatively, they’ll follow behind you like a magnet and you’ll have to fly in sharp circles until you can finish them off.

The other issue with X-Wing Alliance is that it can take a while for the action to heat up. Once you arrive to your destination, it can take most of 3-5 minutes for the enemy fleet to jet in and scurry toward you. Levels in X-Wing Alliance are needlessly huge, and cast their opponents on opposite sides of a huge chasm of space. This is made all the more frustrating on difficult missions, when long waits to take out the enemy result in immediate death. 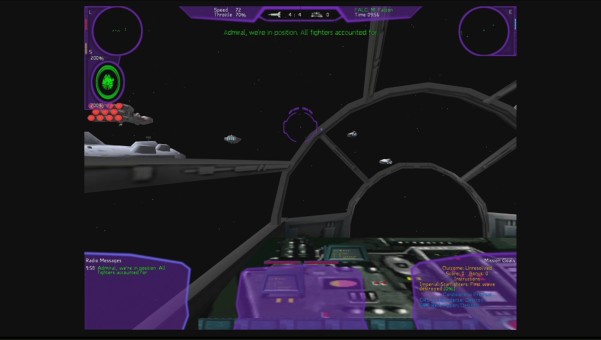 I’ll just set an alarm on my phone for when the imperials actually GET here.

Missions in X-Wing Alliance are a little dull because of the poor AI and the time it takes to ignite and conclude battles, but a little patience goes a long way. Missions are usually pretty short and easy, and you can adjust the difficulty with a labyrinth of options, from turning off friendly fire to making your ship invincible. I found the latter option handy for missions that were too tedious.

These options have been faithfully transferred over to the modern port of the game. X-Wing Alliance has been optimized to run on modern systems and I experienced no bugs to speak of. To further flesh out its piece of the Star Wars universe, the game contains a library of all the dozens of craft you’ll encounter in the game. It’s fun. Especially if you’re a nerd.

X-Wing Alliance contains a mix of original starships and iconic craft from the original trilogy.

The sound design is a solid mix of tracks from the Star Wars movies and some original soundbits added to the spacecraft. The voice acting is… workable. No one delivers their content with what I’d call memorable effort. I still can’t get over how weird it is that your character’s older brother has an Irish accent when everyone else sounds middle American.

The characters, though, are what make this game’s narrative endearing. Throwing the family dynamic into the mix was a good way to make the story feel novel when dozens upon dozens of Star Wars stories were being put out. Of course, with Disney’s acquisition of the Star Wars universe, X-Wing Alliance is no longer considered canon. But hey; you can pal around with some roguish smugglers, shoot TIE fighters, and fly an X-wing. Good enough.

What’s not all that great about X-Wing Alliance is that you need a joystick to play it. It’s a shame that the people who ported this game didn’t make it compatible with an Xbox 360 controller or another gamepad, because playing a flight sim with a keyboard is… not fun. Joysticks usually run for about $50-100, same as a controller, but I wouldn’t recommend picking that up if you’re not already into flight simulators.

The other issue is that, as of writing, X-Wing Alliance has to be constrained to an 800 x 600 screen resolution, which is why some of the screenshots in this review have black borders. Devs, if you’re going to make X-Wing Alliance work on modern systems, take the extra time to add some modern resolutions! So yeah, that’s obviously a major problem. 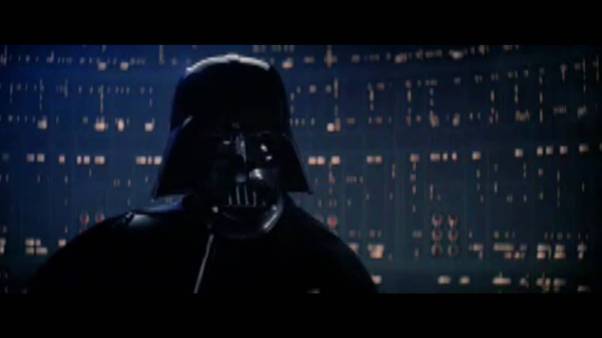 800 x 600? Aside from I AM YOUR FATHER, this is the saddest revelation in Star Wars.

X-Wing Alliance is not a game that tries to pander to a wide audience. It knows exactly who its aiming for and presents a production aimed at a crossover of flight sim and Star Wars fans. The trick is, gamers who don’t play a lot of flight simulators will find this game to not be their cup of tea. Flight simulators have a well-earned reputation for being a bit dry, and though the narrative in X-Wing Alliance is passable, you may find that it doesn’t compensate for the lackluster gameplay.

Compound this with needing a joystick, and the small resolutions the game is available in, and we have something of a half-port. It works great on modern computers, but doesn’t take a few crucial more steps to be truly accessible to fans. Give it a miss if you don’t already have a joystick, but if you’re a flight simulator aficionado, give it a go. X-Wing Alliance is reputed as gaming’s last great space flight simulator, and it’s Star Wars. Fans of both of these things can do a lot worse.