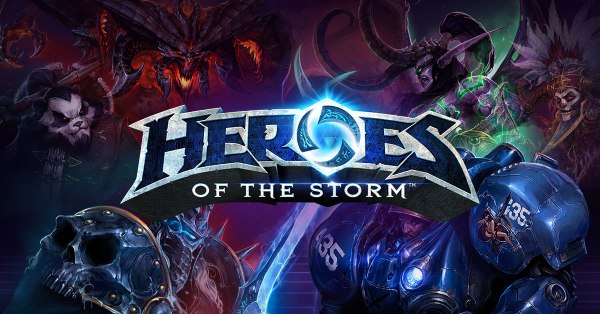 My oh my. Just when I was looking for a way to tie together all of the Blizzard games we’ve been reviewing, along comes Heroes of the Storm. Typically I try to go for some sort of thematic way to tie a bunch of video games together, but thanks to Blizzard, who have dumped a bunch of heroes from a bunch of games into one game, I don’t have to! It’s a great way to talk about games, review a new game, and be lazy as hell. I’m getting things done!

Heroes of the Storm is what’s called a multiplayer online battle arena (MOBA) game. Most MOBA games are isometric strategy games similar to the real-time strategy titles I’ve been reviewing recently, but there are variants on the design. As a general rule, most of them are played from an isometric perspective, and two teams of hero characters must duel for control of the battlefield. 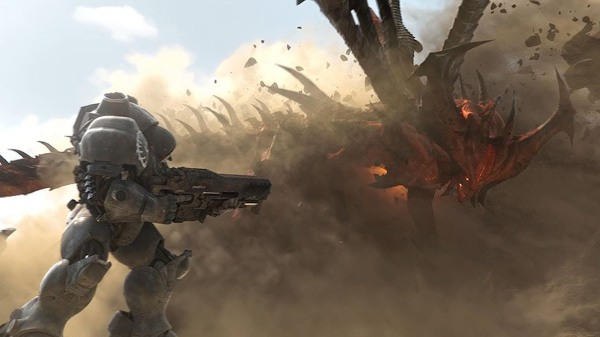 If you’ve ever wondered how StarCraft’s Jim Raynor would fare against Diablo’s… well… Diablo, then Heroes of the Storm is your chance to find out!

As most of you have probably guessed by now, Heroes of the Storm has no narrative. There’s a tutorial mission in which Jim Raynor gets sucked into the Warcraft universe and you learn the game’s basic mechanics, but that’s about it. Rather than featuring a central story, Heroes of the Storm is just a big ol’ brawl. You and your buddies can select your favorite heroes from your favorite Blizzard games, and have at it.

Heroes of the Storm works like this: you and four friends create a team of five heroes, the same as the opposing team. Each team is stuck on opposite sides of a large map. Your base and the enemy’s base are connected by three paths called lanes, and these lanes are defended by a series of towers and gates. Every few seconds, a batch of computer-controlled soldiers will spawn at your base. You can’t select and direct them, but you can have your hero lead them into battle. The team who destroys their opponent’s castle first wins the match. 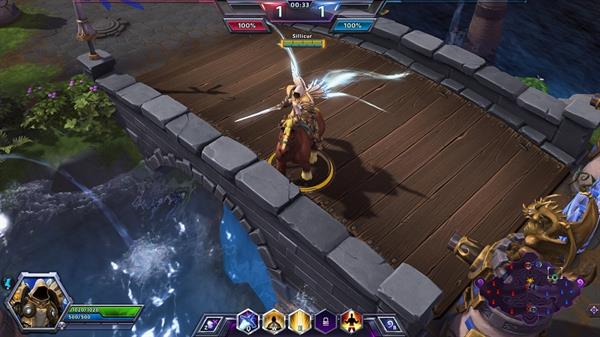 Winning a match in Heroes is a matter of timing, above all else.

I come from the world of real-time strategy games, where you can actually control your units, so having the computer manage them for me took some adjusting. The key to playing this game is timing: timing your hero’s assaults to coincide with those of your army’s, and then retreating before your numbers get too thin and you yourself are in danger. Your base will automatically spawn new units every so often, so this game’s strategy revolves around making the most of each assault instead of trying to micromanage your units’ movement.

Each lane in the game is marked with a series of gates and towers, and you have to take these out in order to make your way to the enemy base. In a bit of a switch-up from, say, Dota 2, towers will only attack you once all your soldiers are dead, giving you time to cause some damage and then retreat. To say that Heroes of the Storm is like the ebb and flow of a river is not inaccurate. You surge and recede with the tides of your troops. 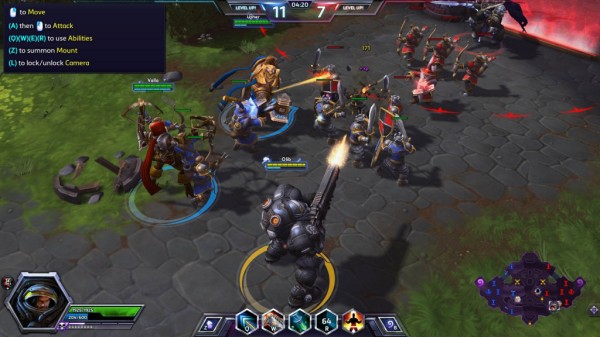 Now; a game like this would be rather simplistic if all you had to do was match your moves with that of your soldiers, but the player-controlled heroes are what will win the day. Each hero you select is not only much stronger than your foot soldiers, but can gain experience from combat and killing enemies. You can use this experience to level up, gain new powers, and use those powers to turn the tide of battle. You get a huge bonus for killing an enemy hero, but if you die, you’ll have to sit out for a while and wait to get resurrected.

Jim Raynor, for example, is good with an assault rifle, but after killing a few soldiers he gains a very useful ability to summon Banshee-class assault aircraft. These things can devastate an enemy formation, giving your own men some breathing room and allowing you to press the attack. Each hero has his or her own unique powers, and figuring out how to use them in conjunction with your teammates and your units will go a long ways toward winning the match. 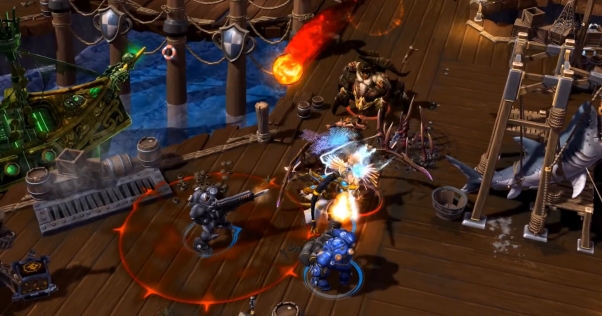 Killing an enemy hero gives you an opportunity to press your advantage, but be careful. Your opponent will do the same if you die.

There are quite a few differences between the three, though. I was reluctant to review this game before having reviewed Dota 2, which I’ve played a lot more, but Heroes is actually a great game to play if you want to practice for Dota 2. It’s simpler, dare I say dumbed down, in comparison to a lot of the MOBA games out there. 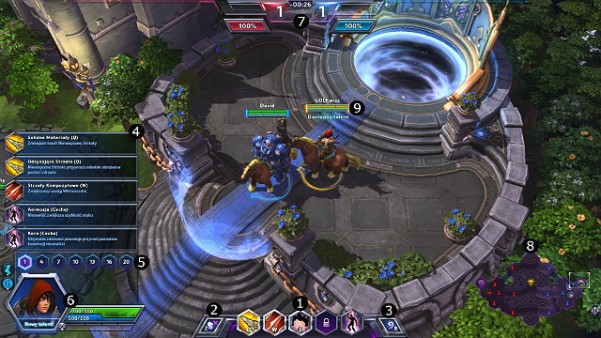 Heroes of the Storm is not a complicated game, by any means. This is both good and bad.

What do I mean when I say dumbed down? Well, Heroes of the Storm has no items, robbing it of a complex strategic element endemic to MOBA gameplay. Dota 2 has a huge item selection that can have just as much bearing on a match’s outcome as its heroes, and to see this absent from Heroes of the Storm made this game feel a bit hollow.

Additionally, part of me didn’t like that the enemy towers only target your soldiers until they’re all dead, because it removed an element of uncertainty that makes Dota 2, again by comparison, more challenging. In Dota 2, you never know if the enemy tower’s going to hit you yet, so it demands more caution. Heroes allows you to throw caution to the wind and fight until you die, which, if you’re more a strategy-minded gamer, is tiresome. 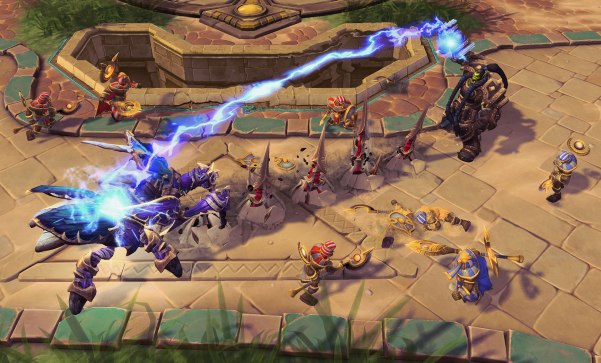 Dota 2 is fun because it’s games within games. Heroes of the Storm has no such depth.

You can see why playing Heroes of the Storm is a good way to start adjusting to more complicated MOBA games, but that’s not a very flattering credit for a video game. I will say that Heroes of the Storm remains a fun game to play, but the strategists among you will get very bored, very quickly.

I will also say that Heroes of the Storm looks a lot nicer than Dota 2. The latter game is colorful and bursts with life, but its Source-powered visuals look a little fuzzy. Heroes of the Storm‘s visuals are crisp and confident in their presentation. Hero and unit animations are very high quality, and the colors avoid looking washed out. The sound design comprises the conventional orchestral battle music we hear in games like these, but the voice acting is decent.

The personality of Heroes of the Storm lies not in its gameplay, but in its characters. Depending on who you talk to, this is either a strength or a weakness.

Heroes of the Storm is a fun little game to play on your way to Dota 2. It manages to offer a simpler experience at the cost of strategic complexity, but it’s not a bad game. It’s also free, so grab some friends and give it a try. If you go up against each other, I can’t guarantee that your friendships will come out of the other side intact.

You can buy Heroes of the Storm here.