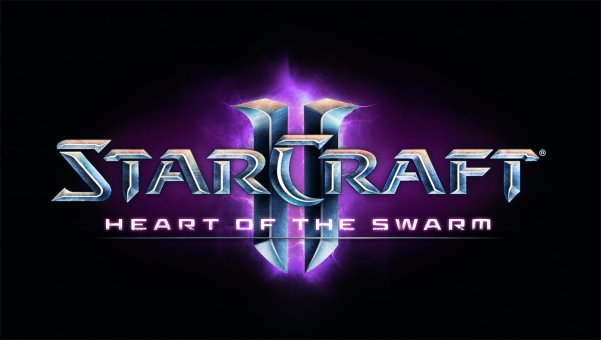 Take command of the Zerg and destroy everything in your path.

Just got back from a much-needed vacation in Memphis. Being unemployed is fraught with uncertainty, but I hadn’t taken a vacation in almost 2 years. Now that I’m back, we can continue our inexorable march into Blizzard’s video games with StarCraft II: Heart of the Swarm, the second installment in the StarCraft II series, and an interesting game in its own right.

I like to think that I do a pretty good job keeping my reviews spoiler-free. It might mask some of a game’s juicier details from the article, but everyone deserves the opportunity to experience these stories firsthand. This time, however, I am unable to talk about Heart of the Swarm without revealing some major spoilers from StarCraft II: Wings of Liberty. Again, before we continue, this review contains MASSIVE spoilers for Wings of Liberty.

Heart of the Swarm is the second installment in the StarCraft II series. Just like Wings of Liberty and StarCraft before it, it’s an isometric strategy game focused on gathering resources and building an army of units. Heart of the Swarm picks up after the events of Wings of Liberty, and rather than controlling humans, players are put at the spiky, slimy helm of the Zerg. 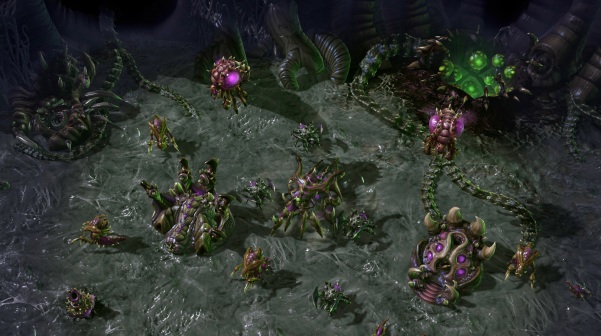 StarCraft II: Heart of the Swarm begins a few weeks after the end of Wings of Liberty. Jim Raynor and his human rebels spent most of that game gathering a bunch of alien artifacts. Turns out that the artifacts could be combined into a weapon, and Raynor used it to cleanse Sarah Kerrigan, the human-Zerg hybrid in charge of the Zerg, of their corrupting influence.

Kerrigan is now human again for the first time in years. She has no memory of her time as the Zerg leader, but her psychic powers are still formidable. 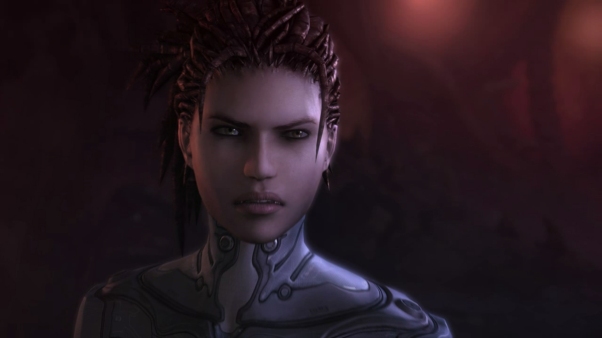 Kerrigan is the main protagonist of Heart of the Swarm. She’s back to being human… minus the hair.

Even though Kerrigan is more or less back to normal, the reason she became a zerg in the first place is because she was left to die by Arcturus Mengsk, a rebel leader who, in the grand style of too many revolutions, becomes a totalitarian leader who is far worse than the government he overthrew. Raynor spent some time harassing Mengsk’s Dominion in Wings of Liberty, but Kerrigan is determined to kill him for everything he’s done.

After Kerrigan spends some time regaining her powers and undergoing lab tests, the facility she and Jim have fled to falls under attack, and the group is scattered. Believing Jim to be missing, or worse, Kerrigan sets off on her own to reunite the Zerg and exact revenge on Arcturus Mengsk. Her reasons for revenge go much deeper than being left to die; after becoming a Zerg, Kerrigan’s insatiable bloodlust led her to slaughter billions of innocent people. She lays those deaths at his feet, and sets out to collect. 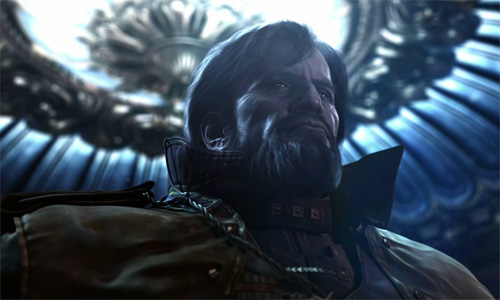 Arcturus Mengsk is the emperor of the Terrain Dominion and the man who left Kerrigan to die at the hands of the Zerg. He is the primary antagonist of Heart of the Swarm.

Kerrigan’s de-infestation has created a few complications. Without a strong psychic will to guide it, the Zerg Swarm has disintegrated into packs of feral beasts. As Kerrigan, players have to journey across the Koprulu Sector to marshal her forces and kill any Zerg queens competing for dominance of the Swarm. Not to mention the fact that any Protoss you encounter will try to murder you, and oh yes, the Dominion has made you Public Enemy No. 1.

It doesn’t take long to see that Heart of the Swarm‘s narrative is uncomplicated. Wings of Liberty was divided several ways between several different causes, but Kerrigan’s only interest in this tale is vengeance. Plain and simple. In most situations I would say the story runs the risk of becoming a trope, but StarCraft II isn’t most situations. StarCraft fans have loathed Mengsk for years, and the fact that we finally get a shot at this asshole means that the vengeance-focused narrative is okay in my book. 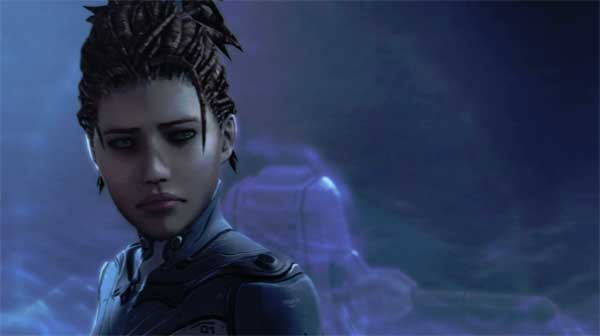 Kerrigan’s journey has been unimaginable, and Heart of the Swarm becomes a more personal story in its examination of the character.

Kerrigan gets around the StarCraft universe in the Leviathan, a colossal 10-kilometer Zerg that’s evolved for space travel. As with the Hyperion in Wings of Liberty, Kerrigan can visit different parts of her “ship” between missions and interact with various characters. Your biggest allies are Izsha, a cobra-looking thing that hangs from the ceiling and serves, more or less, as your secretary.

The other creature at your beck and call and one of my favorite StarCraft characters is Abathur, a spindly spider thing that’s responsible for introducing new DNA to the Zerg swarm. Izsha mostly briefs you on missions, but Abathur will take any alien DNA you find on missions and introduce it to the Zerg to make your monsters even deadlier. This is a useful gameplay mechanic, but it was Abathur’s dry commentary on galactic events and complete lack of social graces that solicited the most laughs from me. 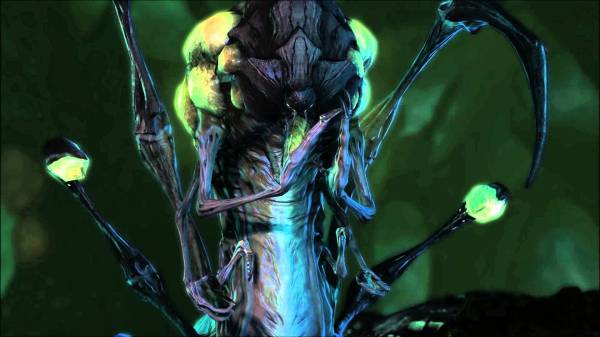 Abathur serves as a walking, talking genetics library. His failure to grasp either subtlety or morality makes him something of a comic relief character.

Heart of the Swarm is a full-length game, and nearly all of its missions see you, the player, in command of the Zerg. Once you’ve selected mutations for your creatures, you can set up a hive cluster and start wrecking things immediately. Unlike the humans or Protoss, where you typically have to train one unit per building, the Zerg can mutate their larvae into batches of new creatures at a time. You can whip up a new army in record time, to defend your base or ravage enemy camps. This quick ferocity is perhaps the best trait of the Zerg.

Once you’ve set up a nest and trained a few gatherers, it’s time to breed an army. Classic StarCraft units like the rabid Zergling and the imposing Hydralisk return from games past, but we also see a few new units, like the ranged Roach and the dastardly Baneling. Because you can train units quickly, the Zerg are best used in a blitzkrieg-style attack, or “Zerg Rush”. Zerg feel no fear and will run to their deaths if you order them. 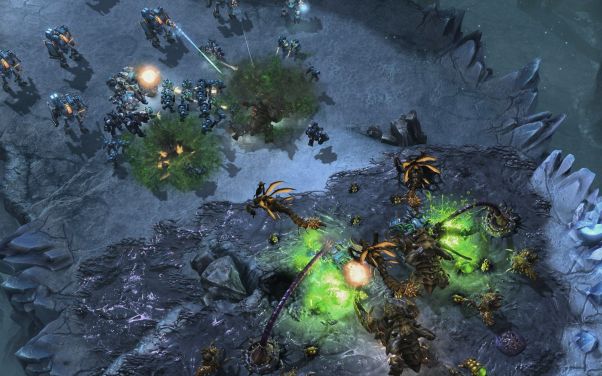 The Zerg’s ruthlessness combined with their quick training time makes them a powerful force… and really fun to play as.

Between most missions, you’ll have an opportunity to mutate your Zerg to suit your playstyle. Abathur can “spin” new DNA into your various Zerg units, but you’ll have to pick between two different capabilities for each one. I personally favor a quality-over-quantity strategy and keeping my units alive as long as possible, so Heart of the Swarm allowed me to pick mutations to make my Zerg tougher and more maneuverable on the battlefield. But, if you play strategy games with more of a mob stratagem in mind, you can select upgrades for that, too.

Heart of the Swarm‘s mission design compliments this unit versatility. Even more than in Wings of Liberty, Blizzard found ways to get very creative with the RTS format. One mission sees you adapting Zerg to cold-weather combat on the fly. Another, and my very favorite, allows players to infiltrate a Protoss warship as a little Zerg worm, and slowly take the whole goddamn thing over from the inside. It’s like a behind-the-scenes of Dead Space! 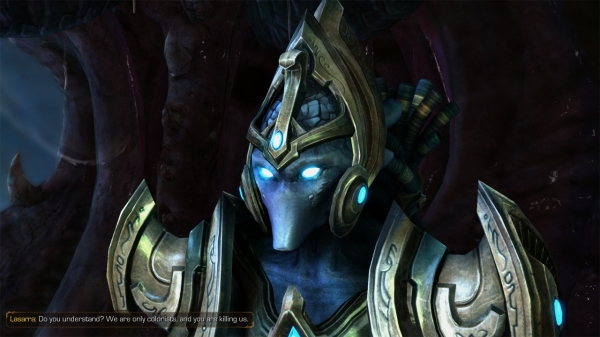 Heart of the Swarm is consistent with creative, lateral thinking.

More than anything, though, I appreciated Heart of the Swarm‘s missions because they “felt” like Zerg missions. It was never a matter of just building a base and taking out the enemy… well, yes it is, but the game lets you do it Zerg-style! A few missions start you off with an overwhelming horde of Zerg, and allow you to sit back and just watch as they wash into the enemy base like a roaring tide between river rocks. This isn’t to say there isn’t an element of challenge, but Heart of the Swarm strikes a balance between giving players a lot of power and tempering it against foes.

Kerrigan is also a playable character in Heart of the Swarm’s missions, and the game adds some light RPG elements with her presence. Kerrigan gains experience from killing enemies, and you can use this to level her up and select devastating psychic powers. Generally, your options vary between massive offensive abilities, and passive powers that strengthen your surrounding forces.

Though the individual levels are great, some of the narrative structure is a bit flawed. Unlike Wings of Liberty, where you could hop between planets one mission at a time, Heart of the Swarm has three missions to a planet and you have to stay there until the arc is concluded. You also have a lot less freedom in deciding which planets to visit first, constricting the narrative a bit more. To be frank, some planets didn’t need three missions. Others could’ve done with one or two more. In all but a few cases the tri-mission model either felt bloated, or critically thin. 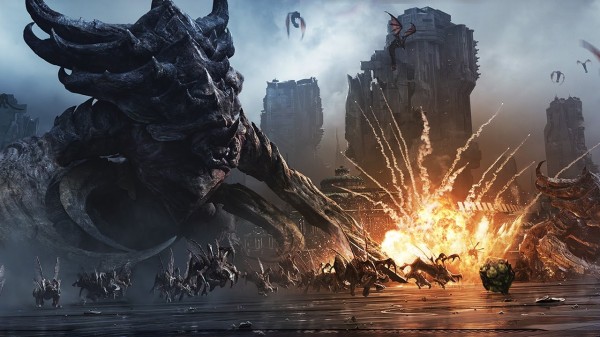 Heart of the Swarm tries and fails with a one-size-fits-all mission structure.

I mentioned earlier that this game was a simple revenge story, but there’s a lot of groundwork laid down for StarCraft II: Legacy of the Void, the Protoss chapter of the StarCraft II narrative. Late in the game, Kerrigan stumbles upon strong evidence that an ancient race of aliens is returning to the galaxy, among other disturbing revelations. Some games spend way too much time being a springboard for the next game, but Heart of the Swarm got it just right. Spend a little time alluding to future events, then move on.

The character of Kerrigan is also interesting because her morality shifts just as rapidly as her species. She’s definitely one of gaming’s biggest antiheroes, and witnessing her transition from pure villain to flawed protagonist makes for quite a journey. It’s even better if you played the original games way back in the day. I appreciate that a lot of time went into Kerrigan’s character building and that her dialogue is well-written, but her Zerg character model is laughably sexualized. 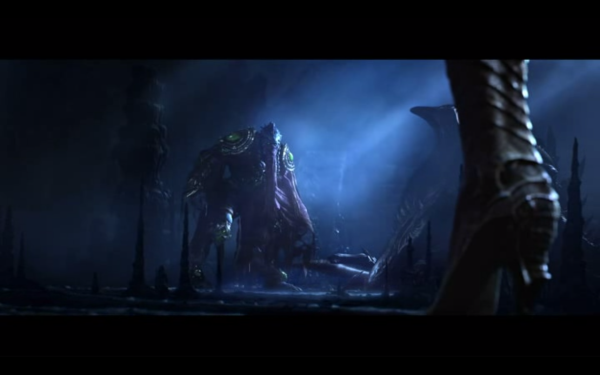 Sexualization of characters in especially senseless situations makes the story less powerful. Even something as seemingly nit-picky as this screenshot sticks out like a sore thumb. Fortunately, Heart of the Swarm gets much else about the story right.

In summary, StarCraft II: Heart of the Swarm is a decent game that I recommend you buy, but the game’s relegation to a more structured setup leaves a lot to be desired. Part of what made Wings of Liberty fun was the feeling that you could go anywhere you want, and Heart of the Swarm doesn’t capture that same sense of freedom. Its missions are funner, though, and its core narrative against one of gaming’s most hated tyrants makes it a must-play for StarCraft fans. If you’ve ever wanted to live that “drive your enemies before you and hear the lamentations of their women” phrase, StarCraft II: Heart of the Swarm is the game for you.

You can buy StarCraft II: Heart of the Swarm here.