Draw bloody battle lines in a war between tyrants.

I had thought we would end the month with the Myst V review, but I also didn’t want to leave Reign of Chaos hanging without the expansion that makes Warcraft III truly great. Warcraft III: The Frozen Throne is a fitting epilogue to the month of March, and one of my very favorite real-time strategy games. It manages to preserve the gameplay that made Reign of Chaos fun, but also adds some much-needed narrative weight.

Warcraft III: The Frozen Throne is an expansion set for Reign of Chaos, meaning that while it provides a new narrative in the Warcraft universe, it is not an entirely new game. Rather, it retains Reign of Chaos‘s gameplay and visual style, while adding new units and narrative.

The Frozen Throne‘s story is set several months after the end of Reign of Chaos, which followed four high fantasy civilizations and the heroes who lead them. It turned out that the undead Scourge were just the lapdogs for an army of demons, who invaded the world in huge numbers. Luckily, the remaining three civs (humans, orcs, and Night Elves) were able to set aside their differences long enough to beat back the undead and their demonic masters, scoring a major victory for mortals everywhere.

Reign of Chaos culminates in an epic battle between the three living civilizations, and the undead and their demonic overlords.

Like Reign of Chaos, The Frozen Throne features an overarching narrative broken up into several campaigns, each one following one of the game’s core races. The game kicks things off with the Night Elves and Maiev Shadowsong, a vicious prison warden in hot pursuit of a mysterious captive who broke out after 10,000 years’ imprisonment.

That captive turns out to be Illidan Stormrage, a half-Night Elf, half-Demon sorcerer who played a minor role in Reign of Chaos and returns as one of The Frozen Throne‘s most pivotal characters. Though the demonic Burning Legion is gone from the world, Illidan has been hired by one of its overlords to complete a top-secret mission in their name. To that end, Illidan has awakened a bloodthirsty race of serpentine sea-men called the Naga, who debut as a new, fifth civilization in The Frozen Throne. Maiev’s campaign to bring Illidan to justice soon turns from a police chase to a full-scale war. 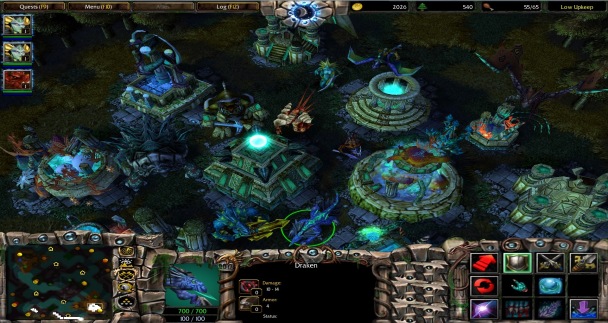 The Naga are a new civilization whose specialty is naval combat. They field a wide arsenal of heavy-hitting units and are a force to be reckoned with.

The Warcraft universe also features “normal” elves, the same kind that you see in Lord of the Rings and so forth, whose civilization was devoured by the undead in Reign of Chaos. Frozen Throne‘s second campaign follows the few elves who survived and their war-weary leader, Prince Kael’thas, who discovers that his brethren suffer an addiction to magical power. Kael’thas is approached by the Naga, who share this condition, and he reluctantly signs on with Illidan in exchange for a cure for his people.

The third and final campaign of the main narrative returns us to the undead, who have become an independent faction without the demons to boss them around. Arthas, the human prince-turned-undead knight, crowns himself king of his ravaged homeland and begins exterminating the few humans who eluded his grasp in Reign of Chaos.

The undead seize upon their demonic masters’ defeat.

Arthas’s hunt for humans is interrupted by a dire warning from the undead’s telepathic master, the Lich King. It turns out that the secret mission Illidan was hired for was to destroy the Lich King and the titular Frozen Throne from which he rules, in retribution for the King daring to make the undead independent from the demons. Arthas immediately takes off in a race against Illidan, setting the stage for a showdown between Warcraft‘s deadliest villains. One seeks to destroy the Frozen Throne, the other seeks to save it… or perhaps… take it for himself.

Is everyone with me so far? Just like with Reign of Chaos and StarCraft, it’s hard to summarize an RTS with so many campaigns into less than a few paragraphs. The Night Elves are out to arrest Illidan, Illidan’s out to destroy the Frozen Throne, and Arthas is out to save it. Oh… I guess that’s a summary right there!

The Frozen Throne features a much more intricate plot than its predecessor.

You would be correct to believe that The Frozen Throne has a much stronger narrative than Reign of Chaos. The first game’s story had its moments, but was mostly a black-and-white battle between four different civilizations for the fate of the world. Such a premise is large in scale, but scale is never an ideal replacement for intricacy.

The Frozen Throne‘s storyline features multiple factions within the same civilization, some of whom are competing directly against each other in this bleak game of thrones. In Reign of Chaos, the various heroes in each campaign were in charge of the same faction, but now each hero in each story has his or her own sub-faction. Maiev Shadowsong’s vicious group of Night Elves stands apart from the calmer sentinels led by Tyrande Whisperwind in the last game. The elves begin to resent their human partners as they drift ever closer to Illidan, and Arthas faces a homegrown insurrection from undead who resent his brutal reign. There are dozens of moving pieces in The Frozen Throne‘s story, and keeping track of them all can be a challenge. 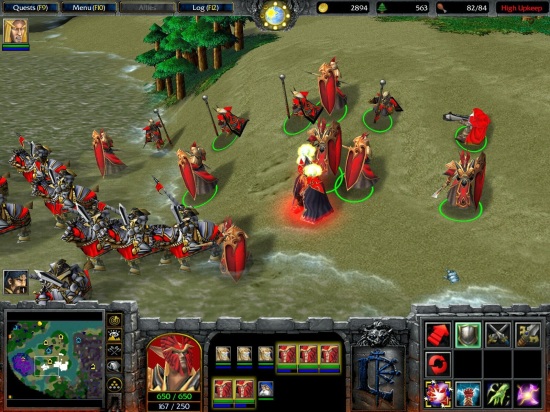 All three main campaigns alternate between at least two sub-factions within each civilization. It can be a lot to follow.

Although there’s a lot going on in The Frozen Throne, the main story is tightly designed. The dialogue writing is significantly stronger than in Reign of Chaos, and hero characters both new and returning are much more complicated than the one-sided shades of heroism or evil we saw in the last game. It’s hard to know who to root for, and that’s the way I like it; Maiev’s quest for justice will see her do horrible things for the greater good. Illidan is out to destroy the undead, but he’s doing it for demons. The other characters within each faction display much stronger writing in their characterizations and dialogue, making the story more interesting.

In addition to many moving parts and much stronger narrative writing, The Frozen Throne also features better level design. The campaign missions in Reign of Chaos are pretty straightforward; set up a base, train units, and keep pushing across the map until all of the enemy squares are gone. The Frozen Throne gets much more creative, throwing players into winding dungeons with few units, or unconventional means of gathering resources. One particularly long and grueling siege of a demonic fortress requires players to balance two factions of siege units and a third group of stealthers who sneak around nabbing gold. Most two missions are never the same. 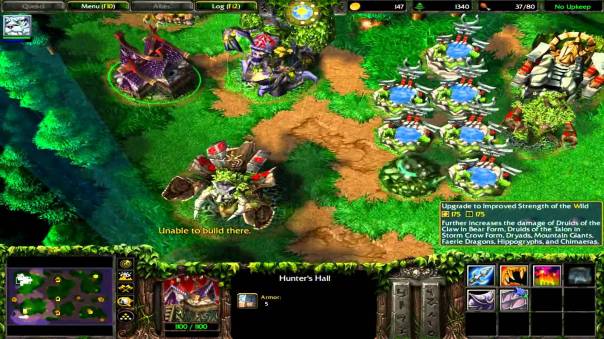 The Frozen Throne’s mission design is more varied, and therefore more interesting, than that of its predecessor.

It would be one thing if The Frozen Throne changed things up just in narrative or mission design. We have a much darker story and more complicated characters at its helm. But, each of the four main civilizations also receives a few tweaks to freshen things up a bit. Each civ receives two brand-new units for combat, and a new hero unit that can level up and be resurrected in the same manner as the heroes introduced in Reign of Chaos. Players can also build a store and buy items for their units. You can now buy health potions directly instead of hoping to happen upon them in the wilderness.

The Frozen Throne also introduces a plethora of new “lesser” races that populate the world and add to its vibrancy. Giant scorpions, walrus-men, sentient pandas, and others are just a handful of the new creatures you can expect to run into. Some can be hired, others can only be killed, and you can hire neutral heroes in specially designated taverns. 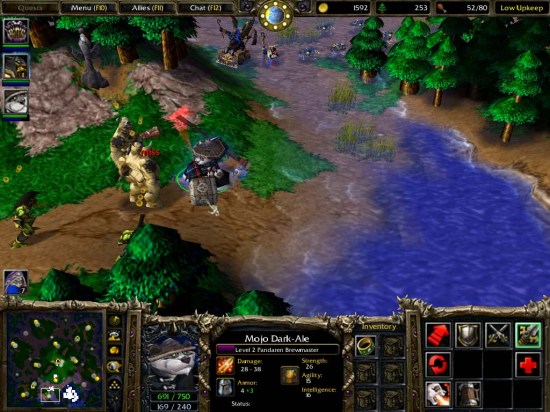 Neutral heroes will fight for whoever has the most coin. My favorite neutral hero by far is the anthropomorphic, alcoholic panda, A.K.A. the Pandaren Brewmaster.

I tell you all of this because if Reign of Chaos is pretty fun, The Frozen Throne is ridiculously fun. More units for each civilization means more creativity than we’ve seen in the past. The new units also serve to tweak the strengths and weaknesses of each civilization a bit, bringing in some of the checks and balances that Reign of Chaos missed. The Frozen Throne takes what Reign of Chaos made workable and perfects the formula, making it, in my opinion, the best real-time strategy game of the 2000s.

Some of you might have noticed that I omitted the orcs from the main story. So did The Frozen Throne. The orcs have a fourth, bonus campaign set months after the conclusion of The Frozen Throne that serves as a prologue to World of Warcraft. The campaign is set up like a dungeon crawler instead of an RTS game and follows Rexxar, a half-orc, half-ogre warrior who helps the orcs set up their new country. Thrall makes an appearance in the story, although he apparently has nothing better to do than direct the construction of roofs. This cordoned-off campaign sometimes sees you in command of multiple units, but mostly you’re working with just Rexxar and a few of his buddies at the helm. 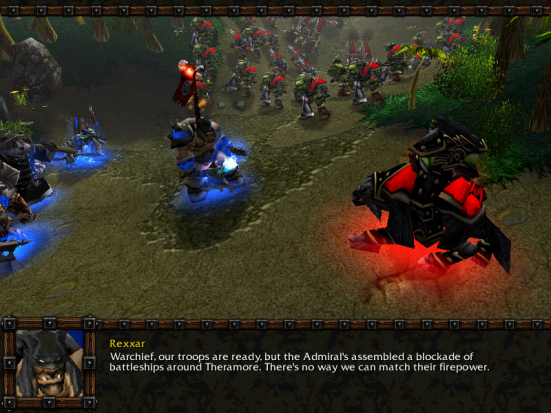 The orc campaign stands apart from The Frozen Throne’s narrative and has a different gameplay style. It sets up the events of World of Warcraft.

A few people cried fowl at not including the orcs in the main story, but I don’t think it was lesser for their absence. The developers couldn’t find a way to work them into the race for the Frozen Throne, so they gave them their own mini-story to set up World of Warcraft.

The Frozen Throne also features a few mini-games tucked away in its menus, including the precursor to Dota 2, and an egg-hunting game featuring a chain-smoking Easter bunny hero. The games are fun on or off of Easter but the latter seems especially relevant today.

Overall, The Frozen Throne is a great game. Its gameplay has been significantly upgraded to give it the punch that Reign of Chaos missed, and its narrative features stronger, tighter writing. The graphics are still as blocky and goofy as ever, but when you’re talking to a gamer who prefers story over style, graphics only mean so much. I highly recommend setting aside some time for The Frozen Throne. It is difficult, but not cruel. It is vibrant, but not over saturated. It’s not perfect, but it’s damn good.

Also, I wanted to let you guys know that I’m taking some time to refurbish and re-format some old reviews from my previous website. There will be no reviews all of next week, but we’ll pick things up again the week of the 4th with regularly scheduled content. Thanks for reading!

You can buy Warcraft III: The Frozen Throne here.