Elude a serial killer and discover why he’s after you.

I haven’t had good luck with video games these past two weeks. From a Batman adventure gone awry to a deer game that indicts both hunting and my intelligence in one fell swoop, I seem to have hit a rut. A buddy of mine who bore witness to the golden age of adventure games suggested I try an old-school puzzle game to cleanse my palette. Because horror-themed games are my favorite, I decided to start exploring this sub-genre in earnest with the recently released Days Under Custody.

Though Days Under Custody was released only a few months ago, it goes for the scene-by-scene adventure game formula that I was too young to appreciate in its heyday. I don’t think I even existed when Operation Stealth and Future Wars were released, so it’s not a type of video game that I have a lot of experience with.

As it turns out, English is not the first language of Days Under Custody‘s developer, which is fine. I don’t know how well I would do coming up with a name in a foreign language, but I would at least double-check that the name didn’t sound like a species of timid waterfowl.

Anyway, Duc wakes up in the night to horrible shrieks coming from his neighbor’s apartment. Turns out that his neighbors were diced up by some crazed serial killer, and the dude is still on the loose! As Duc, it’s your job to explore the apartment complex and investigate the goings-on, all while avoiding the murderer who stalks the shadows. 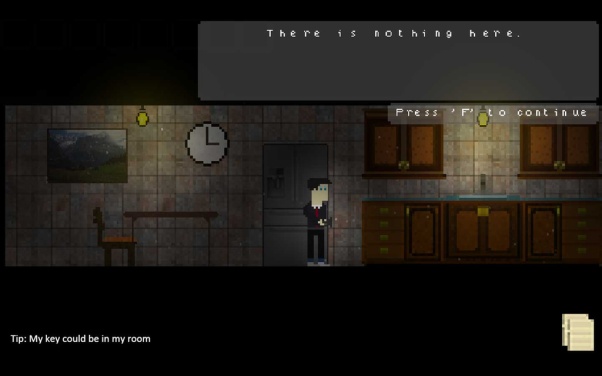 Days Under Custody seeks to emulate the item-seeking, room-exploring vibe of yore.

Duc can explore environments by moving from one end of the scene to the other and going through doors, which really sums up just how exciting exploration in these old-fashioned games is. Again, as with older games, you achieve your goals primarily by finding keys and unlocking doors to new areas. Duc can’t seem to remember where he left about 99% of his keys, so players have to be very thorough with searching entire scenes.

Most rooms in the game are also littered with notes that give further exposition to whatever’s going on here. We see written accounts from Duc’s parents and vague descriptions of the serial killer who’s prowling around outside. Sometimes the dude himself shows up to cut a bitch, but don’t worry; the nearest person-sized wardrobe is never too far away.

The meat of Days Under Custody‘s gameplay is this simplistic search for keys, and honestly, it’s not that difficult. The game world is pretty small, and there are few places the keys can hide if you’re a reasonably thorough searcher. Duc also drops hints that give players the exact location of the keys, which is probably another accidental product of the developer’s lack of English comprehension.

Let me say again, I don’t care if English isn’t someone’s first language. I’m not a right-wing xenophone who wants everyone to, in the immortal words of Sarah Palin, “speak American”. But, if you’re going to market a game to an audience, it helps if you have a pretty good grasp of how the writing and comprehension in their language works. We’ll be getting into that again and again as we go along.

“Enter on department 304”. Case in point on the poor translation.

Despite the writing errors and simplistic gameplay, Days Under Custody does have a pretty decent horror atmosphere. Not great, but the eerie strings of the soundtrack and the sudden crashing of something downstairs will keep you engaged. When the serial killer does show up, you have seconds to hide before he runs past and into another part of the house. These encounters can happen anytime, and though they’re easy to avoid, that initial appearance is surprisingly frightening.

After slinking through the apartments, Duc makes his way onto the street, where Days Under Custody begins taking turns for the worse. Until now, the poor English writing really only betrayed item locations and a few important lines of dialogue. Now, they’re muddling up the instructions for puzzles.

Where am I going?

Now, again, I don’t care if you can’t speak English that well. I’m quite lenient toward grammar and comprehension mistakes when it comes to exposition, but not to puzzles. If you’re going to create a puzzle, and the rules for that puzzle, you’d better make damn sure your instructions on how to proceed are crystal clear. Telling me that the door code I’m after is “the number of pictures you saw” is neither clear nor concise. Considering that I saw no pictures on my way to the door code, it’s basically gibberish. Puzzles are difficult enough without being unable to discern what we’re supposed to do.

Things only continue to go off the rails from there. After Duc punches in the door code, you get into an apartment building full of nonsensical hidden wall puzzles. The final puzzle, one that I solved through sheer luck, involved putting four gemstones in front of four paintings. I tried looking for corresponding colors between the stones and the paintings, and then tried randomly putting them in. The latter strategy worked.

This touches on a larger problem that I have with old-school adventure games. A lot of their challenges have absolutely nothing to do with skill. Instead, they have everything to do with happening to find random objects, or investing hours of my time into guesswork. Puzzles should not be a matter of luck, they should be a matter of logic. You don’t have to tell me the exact solution, but at least tell me the rules that I’m working with so that I can make my way there. Days Under Custody, and many older games like it, assumes that randomly guessing shit is fun. Maybe I’m just too hip and far out for the older games, but randomly guessing shit is not fun. It is boring. It is frustrating. It is bad game design.

Okay, seriously, how the hell is this supposed to be fun?

Days Under Custody, though, misses something that even tedious old-school games might have done well: the narrative. Between the poorly written dialogue and the bad puzzle design, I had no clue most of the game what my long-term objective was. I pack my shit and get the hell out of dodge whenever a serial killer’s on the loose, but ol’ Duc is just too brave for that nonsense.

I was able to discern the plot twist long before it happened, and I’m just going to spoil it because anyone who wastes time thinking this game’s story is good deserves no quarter. Turns out, the serial killer looks a lot like Duc. Some might say… almost identical, and the game descends into the stereotypical it-was-me-this-whole-time plot twist. The sort of psychological spin-doctoring that’s become endemic to thrillers since Fight Club. I was also able to discern this because the writing, bad as it was, let on much more information than the developer probably intended. Subtlety is probably the hardest thing to grasp about any language. English is no different.

Aaaaand we’re back at the menu screen already? I just sat down a half-hour ago!

I don’t know much about old-school scene-by-scene adventure games, but Days Under Custody was a bad place to start. It has some decent artwork, and some okay music, but everything else about it is meh or worse. The writing is inexcusably bad even for someone who doesn’t speak English as their primary language. This has Google Translate written all over it.

The narrative is as run-of-the-mill as can be, and the luck-based puzzle design is something that I cannot condone. I also can’t condone you, dear reader, wasting your time with a half-hour exercise in failed horror. If you never read anything else on this blog that I write, DO NOT BUY DAYS UNDER CUSTODY. Just don’t even bother, even for shits and giggles. But I’ll leave the link up, just in case you need to exercise your self-hatred.

You can buy Days Under Custody here.