Explore the remains of an undersea war zone, and the terrors hidden in the deep.

I love being chased around by monsters and serial killers as much as the next guy, but atmosphere makes or breaks a horror game as much as tense survival gameplay. Though the latter format makes for some fun stuff, I also enjoy games that explore other horror forms so long as the atmosphere remains intact. Anoxemia is a game that succeeds in exploring other ways to scare you, but, as we’re about to learn, atmosphere can’t save a game from even one fatal flaw.

Anoxemia is a side-scrolling platformer set after an apocalyptic future war. Player character Dr. Bailey and his robot ATMA are dispatched to the remnants of an underwater war zone to collect mutated plants. The area he’s to explore is located at the very bottom of the ocean, in a region that’s been heavily irradiated by past battles.

At the outset, the job sounds simple, but Bailey loses contact with his team and then has to eject from his submersible shortly thereafter. Players must guide Dr. Bailey and his robot through a hazardous and morose underwater world to both complete the mission and find a way back to the surface. 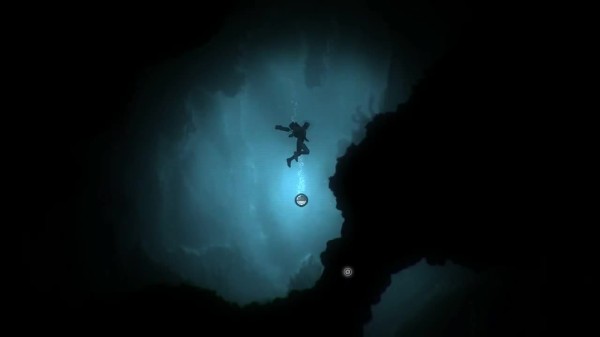 The game blurb’s assessment that you control Dr. Bailey is technically incorrect. You’re actually in control of ATMA, his little drone, and have to guide him through this haunting seascape. It makes for a challenging game; enemies are more likely to chase Bailey than you, and you have to make sure that any passages you find are big enough for him to also squeeze through. If you drift too far ahead of him or he gets struck down, the level is over.

And yes, there are enemies down here. Robots left behind from whatever war this game postdates will attack the pair of you on sight. This forbidding zone is also home to a variety of unfriendly sea critters and a sea within a sea of sea mines. Combine this with Anoxemia‘s fondness for narrow caves, and we’ve got ourselves quite the difficult little game.

Anoxemia is the most challenging platformer I’ve played in years.

You have a few tools at your disposal for dealing with enemy threats, though in the style of a true horror game, no direct weapons. You can stun enemies for brief periods of time or jet away from them as the situation allows. Eventually you’re also given access to a little blade-cable thing that you can use to tether onto rocks and cut sea mines free. Ultimately, though, your best chance for survival in Anoxemia is deftness with the swim-the-hell-away keys.

Though Anoxemia‘s enemies are formidable, there are only, like, three kinds. Once you’ve survived the first five levels or so, you’ve seen pretty much all the enemies the game has to offer. A robot, a jellyfish, and some little homing mines. 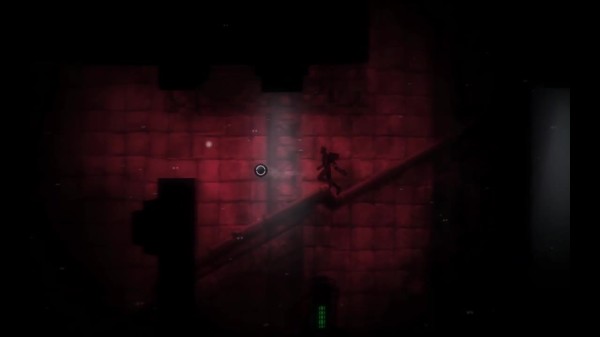 SWIM AWAY, SWIM AWAY!

Anoxemia compensates for its lack of enemy foes by infusing more danger into the environments. Most levels have their own environmental hazard; caves, for example, feature hidden clumps of rocks that can fall on you at a moment’s notice. A few levels feature laser-triggered missile traps that will gut you with a sidewinder if you try to swim too high. You’ll also face less direct threats, like navigating a maze of sunken ship corridors with little light and even less oxygen.

So yeah, for anything that can be said about the lack of variety in Anoxemia‘s corporeal enemies, the game more than compensates by upping the environmental hazard factor. 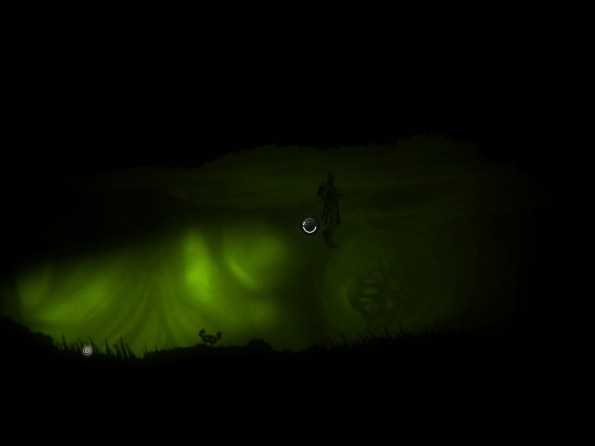 Anoxemia has some creative environmental dangers. The irradiated sea cave pictured here can flash-fry you with a sudden gush of acid.

So what exactly are we navigating all of these hazards for, again? Well, Dr. Bailey is a botanist, who apparently specializes in extracting flora from irradiated submarine battlefields. Quite the sub-focus. Anoxemia is divided into over 20 levels, and you can’t proceed to the next one until you’ve found every hidden plant sample.

Anoxemia paces itself well, putting 2-3 short levels between much longer gather-fests. Each set of levels has its own theme, though they don’t necessarily all share the same dangers. As you can see from the screenshots, the game’s beautiful aesthetic pits a dark foreground against vividly colored backgrounds.Some areas have no background pictures to speak of, just the darkness of the open ocean. But, most give you lots to look at. Submarine bases, sunken ships, sea caves and underwater canyons form most of the artistic themes present in Anoxemia.

I don’t care how many nukes went off in here, I’m ready to go. Let’s James Cameron this shit.

The aforementioned horror elements come out in Anoxemia‘s art design as well as its sound. I’ll keep saying it ’till I’m blue in the face, sound design is vital to crafting a quality horror atmosphere.

The enemies you face in this game are not super-scary, by any means. But the sounds of creaking ships and the distant moans of ungodly deep-sea creatures will have you on edge throughout the game. It indicates an impressive attention to detail, and as we all know, the details are what people remember. 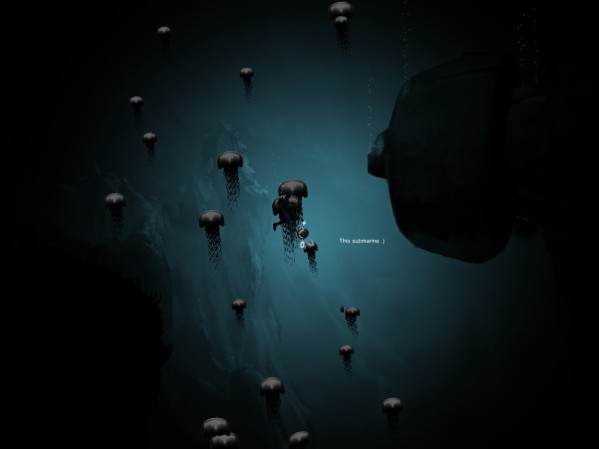 Finding Nemo taught me to stay on the jellyfish tops. It actually worked!

So what are these fatal flaws that I alluded to up top, you might ask? So far this game sounds great. Great art, great sound design, challenging gameplay…. what’s not to love?

Well, before you rush off to Steam with wallet in hand, let’s circle back to that narrative premise real quick. Dr. Bailey’s down here to gather plants, as we know, but that’s about as far as the narrative goes. Occasionally the screen will short out and then show Bailey swimming in a sea of dead bodies, which, while scary, doesn’t really have any sort of follow-up. He just keeps swimming like nothing happened, which is a damn shame, because it made me jump the first time. 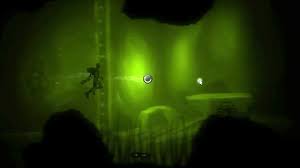 Bailey will occasionally comment that he seems to remember coming this way before, but does nothing more to address those concerns, instead contenting himself with plants.

The Achilles’ Heel of Anoxemia is one seemingly small design flaw that ended up ruining the game for me. Throughout each level, you need to find Dr. Bailey enough oxygen to keep him alive while he looks for plants. Problem is, whatever amount of oxygen you end the level with is the same amount that you’ll start the next one off with.

See what I’m saying? If I finish a level with five seconds on my air meter, that means I start the next level with only five seconds to find more. What the developers of this game failed to take into account is that oxygen is never five seconds away from your starting point. Ergo, you’re screwed. I can appreciate a good challenge, but I can also only try to redo a challenging level so many times before I lose my shit.

Anoxemia spends much of its time on the fence between challenging and broken, before descending into full-on broken.

The thing that surprised me is that the developer is apparently A-OK with this type of design. I made a post on Anoxemia’s Steam forum about this flaw, and he and I went back and forth a few times without him understanding why this would be a problem. “Just do the preceding five levels over and hope for more oxygen!” was his conclusion to the discussion.

No can do, sir. I don’t hate myself enough to play ten levels over just so that I might beat the eleventh. I don’t care what plot twist this game is building up to, I just don’t have the time, patience and self-loathing required to perpetually replay entire swaths of the game in exchange for crumbs of progress. The developer should’ve designed the game to just start off with a set amount of oxygen; it’s still plenty challenging even if that suggestion had been implemented.

Also, this guy has a pink mustache… for no apparent reason.

Anoxemia is a great example of how one design flaw can upend an otherwise great game. I give this atmospheric platformer full marks in art, sound design and atmosphere. The story, while weak, is workable. It’s just that one little thing that only those of you with masochistic tendencies will have the fortitude to surmount. I refunded the game and moved on to other things. Spend your time and money elsewhere.

Oh… look at that. Anoxemia is a scientific term that means “out of oxygen.” How ironic.

You can buy Anoxemia here.