Having arrived to a forgotten island, hunt down the cult that calls it home and find peace for a ghostly companion.

Short Horror Week Finales are outstanding achievements in horror gaming. Those achievements have always relied on being terrifying in a novel way. Slender, Vanish, and Five Nights at Freddy’s all fit these criteria. Tonight, I wish to present a game that, while not as in-your-face shocking as Fnaf or Vanish, has a scare value that goes far beyond little jumpscares and will haunt your dreams for weeks. The Music Machine, a surreal little tale from the same gentleman who brought us The Moon Sliver, horrifies through implication as well as visualization. However, it’s the implications that will leave you the most terrified.

The Music Machine tells the story of Haley and Quintin, the former being a 13-year-old girl with an appetite for rebellion, and the latter the ghost of a 34-year-old man who has possessed Haley’s body. Quintin is dead because of a misunderstanding between him, Haley, and Haley’s father, and now seeks to murder the teenager in the most gruesome way possible.

But first, they chart a boat for a distant island. Their target is a serial killer who’s left piles of impaled corpses in his wake. Quintin’s pursuit of this foe is unexplained, but Haley is helplessly dragged into the hunt all the same. 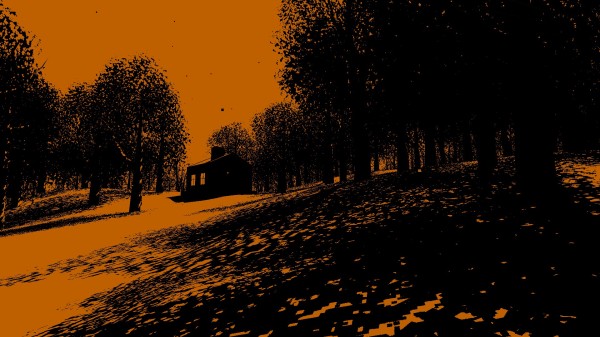 Right off the bat, look at that screenshot. Surreal, yet absolutely gorgeous. The entirety of The Music Machine is presented in this format, with a single strong color contrasting against black outlines and shadows. It’s a visual formula that you can stare into for hours, but it will also raise goosebumps on your neck, especially when paired with the game’s perturbing soundtrack. Different environments utilize different colors, so you needn’t worry if walking around in a macaroni and cheese-colored nightmare all day is not your cup of tea.

The Music Machine‘s many worlds are open, and you can wander around in whatever order you wish. Haley can examine the objects you find, and the pair will offer commentary hinting at their relationship and what’s going on around you. Having been possessed by Quintin for months, Haley has become numb to the shock and horror of her impending death, and has become extremely chipper, much to the dour Quintin’s displeasure. Unlike the bits of story that just popped up in The Moon Sliver, getting the prose in The Music Machine requires careful examination of the features around you.

Exploration precedes the narrative of The Music Machine.

Before long, Haley and Quintin stumble onto signs of recent habitation, the least subtle of which is a new church that wasn’t there a few days ago. Within, the pair become entangled in a much larger journey across many surreal worlds, tied together by a group of creatures best described as the cosmos’ failed disciples. The worlds you travel to are the results of their harsh experiments, which is fascinating in and of itself, but it also provides a novel catalyst for Haley and Quintin’s relationship.

That relationship is the focal point of The Music Machine. As the pair travel to these hellish little pockets of time and space, Haley begins to see an opportunity to escape her fate, and the dangers faced along the way force Quintin to reveal how much humanity he may or may not have left. Vicious arguments will play out silently on the bottom of your screen, adding context and gravity to the already morose landscapes scattered around you.

The Thorn Forest is one of several mini-worlds you’ll visit, and its pain-inducing rain an obstacle for Haley and Quintin to unite against.

So yes, unlike most of the games we’ve talked about for the past week, The Music Machine‘s narrative is good. Perhaps even great. It’s also the primary driving force behind your travels, just like The Moon Sliver. My only concern is that your hunt for the aforementioned serial killer is abandoned almost immediately in favor of the new threat, which I wouldn’t mind so much if the former premise hadn’t been dropped pretty much as soon as the game begins. Never again is the former goal for arrival mentioned.

Lucky for the developer, he somehow heard me through time and space and did more editing on the prose this time! Well-done, because there’s nothing more breaking in a story than bad grammar. Unfortunately, that doesn’t stop some of the writing from being pretty silly, like when Haley starts asking questions about sex to Quintin just out of the blue. Despite these dialogue dips, the events that unfold around you propel more of the past out of our two protagonists. It’s a truly gripping story and one that anyone, horror fan or not, will enjoy. Definitely not a light, happy tale though.

Any game can have a great narrative, so what is it about The Music Machine that makes it so goddamn scary?

Well, in addition to its unsettling narrative, The Music Machine is a masterpiece when it comes to atmosphere. Everything from the outdoor environments to the cramped interiors has been fitted with the monochromatic pattern, but you’ll also hear macabre music and a few sound effects. All of these elements are balanced quite well. Stepping into an abandoned house will actually feel like stepping into an abandoned house. The muffle against the wind, the sound of floorboards creaking, and the occasional piano patter all combine to haunt me to this day. Haley and Quintin will throw in additional descriptors in the dialogue boxes. Organ music will play in the darker areas, to reflect the greater sense of scale… and fear. 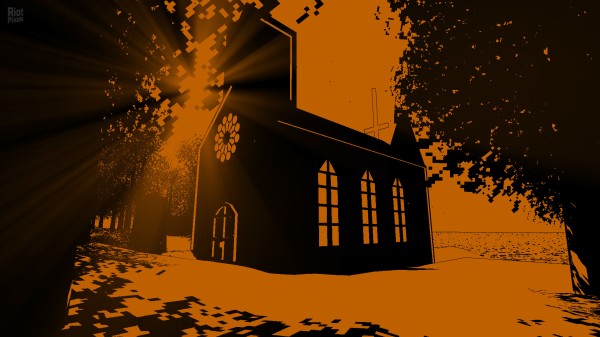 This game will make you feel like you’re in a little old comic book illustrated by ghosts.

Of course, there are also telltale signs that you’re not alone in these worlds, culminating in a series of jump-scary encounters that had me leaping out of my seat with fright. I won’t spoil, but it doesn’t take long for your quarries to try to turn the tables on you, the pursuer. You’ll catch glimpses of solitary figures on the horizon… and much, much closer than that.

Honestly, the thing about The Music Machine that will stick with horror gamers the most is how very sad it is. Sad that these two people have ended up in this situation, and sad that they are pressed into this mad quest against unthinkable forces. The Music Machine‘s atmosphere is thick and intoxicating, soaking a strong sense of dread deep into your bones and leaving you anxious for what’s around the next corner. Traveling through lime-green tunnels, spotting figures in the trees’ black shadows, wandering aimlessly across a blood-red field under a black sun… all of these make for memorable journeys. The Music Machine‘s audio-visual experience infuses you with more wonder, more dread, than any comparable atmospheric phenomena I’ve seen in any other horror game. 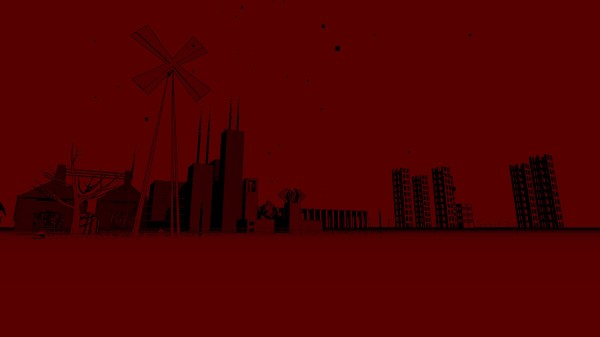 If I haven’t made it apparent by now, The Music Machine is an outstanding achievement of narrative and atmosphere. It’s not as in-your-face ridiculous as Slender or Fnaf. Its dread, no less potent, is more subtle, infecting your mind with its vivid dreamscapes and horrific, enthralling story. Hardcore survivalists will still get their monster encounters, but the greater picture here is that this is the type of dread you encounter only in the most surreal nightmares.

I cannot recommend this game highly enough. Go to Steam, spend the few bucks and two hours required to experience this masterpiece, and bathe in what it has to offer. The Music Machine does not make for light subject matter, but it’s one of the most substantive games I’ve played this year. And with that, Short Horror Week IV has concluded.

You can buy The Music Machine here.