Before we get started on our second review, I apologize for the lack of captions in the screenshots for The Moon Sliver. For some reason WordPress is hiding them from you, no matter how many times I go back and try to write them in. I like this site better than Blogger but it has some perplexing bugs. Or, given the subject matter, maybe my blog has become haunted.

And speaking of haunted… let’s get going with Five Nights at Freddy’s 2, the second installment in our series and the sequel to Short Horror Week III’s grand finale.

Five Nights at Freddy’s 2, or Fnaf 2, if you’ll pardon my laziness, is a point-and-click horror game set in a dilapidated ripoff of Chuck E. Cheese’s. You are some poor bastard who’s apparently so desperate for money that he performs five successive night shifts even though almost a dozen animatronics are trying to rip his head off. You’re hired as part of the restaurant’s grand re-opening, and are charged with preventing anyone from getting in… or out… of the store.

This is the part of the review where it’s best to suspend logic and reason, because the Fnaf lore contains very little of it. Essentially, the animatronic characters used to entertain the kiddies by day turn into remorseless killers by night. It’s heavily implied that the machines are possessed by vengeful spirits, but series creator Scott Cawthon is anything but direct in delivering the lore. As with the original Fnaf, players have to stay put in one office, and fend the robotic killers off until dawn. Even though each round of Fnaf 2 only lasts a few minutes, the suspense and terror translate into hours of your life scared away.

Not exactly an office I’d brag to my friends about.

In Fnaf, your only means of defense was to batten down the office doors and pray away whatever was waiting on your threshold. It was simultaneously the most intense and most nonsensical element of the game, as your doors were powered by electricity. Instead of, I don’t know… gravity?

As you can see in the screenshot, this time you have no doors to protect you. Your only hope for survival is to don a spare animatronic head, in hopes that whatever’s shambled into your office will mistake you for one of its own and show themselves back out. You also have a flashlight, but its power is limited, and it’s a resource you must VERY carefully manage. Finally, you also have access to the feed for security cameras all over the restaurant, allowing you to see how close the dolled-up monsters are to your position. 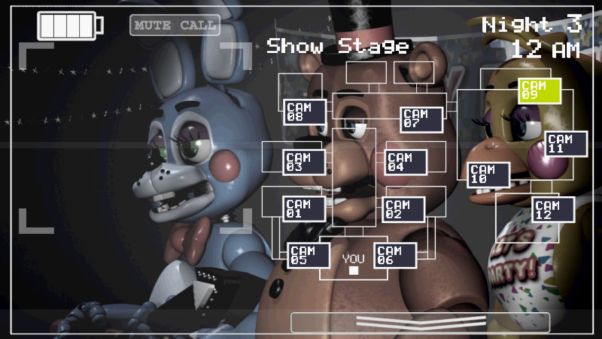 Security cameras give you a visual of every room in the restaurant. But do you really want to see?

Each night of Fnaf 2 is the bastard offspring of chess and a slasher movie. You must carefully maintain the positions of the animatronics while being ready to put on your mask or check the vents into your office at any moment. Each animatronic has its own habits and behavior, ranging from curious vent-poking to aggressive office-barging. Some animatronics aren’t fooled by the mask and must be kept out the office by other means. In a creative departure from the first Fnaf, certain animatronics will disable your tools or non-lethally hinder your progress rather than flat-out murder you.

As you can imagine, this all makes for the world’s most nightmarish game of multi-tasking. Check cameras, shine flashlight into vents, shine into corridor, check cameras, PUT ON MASK HOLY SHIT IS SOMETHING THERE nope, never mind, rinse and repeat. Finding a workable pattern for each night can be a challenge, but it’s the only thing that will save you from being turned into bear-bait.

There are a few pokes at lore here and there throughout the game. While no substitute for a true narrative, there are hints all over the restaurant that Fnaf 2 might actually be the first game’s predecessor, not its sequel. Dying on the job will occasionally land you in 8-bit minigames that give you cryptic clues as to the animatronics’ murderous impulses. The famous Phone Guy from the first game also returns in the sequel, to give you some advice and hint at disturbing events taking place during the daytime shift. As with The Moon Sliver, the exposition present here is sufficient to draw your interest but not enough to keep you from grasping at straws.

Find a way to nimbly shift between mask, flashlight and camera, and you’ll live. Be too slow, and you’ll get jumpscared by a garish, psychopathic robot.

The spare Freddy Fazbear mask can save you from certain death when the animatronics penetrate your office. Which they will.

Fnaf 2 is a definite improvement over the first game, but that doesn’t stop a few glaring issues from jumping out as brashly as the animatronics. First off, there are simply too many of them. I don’t mean to say that’s why the game is difficult, but rather that the enemies will accidentally work against each other to stop you. More than a few times I caught a creepy chicken on my doorstep, only to have been phased out by Freddy Fazbear because the two robots’ behaviors collided and I guess Freddy won? You won’t face down more than one animatronic at the exact same time, but this has a tendency to make the game’s enemies supersede each other in their quest to get to you. It’s a bit silly.

Additionally, the game has a very steep learning curve. The first two nights do a reasonable job of introducing players to the game, but from the third night on, it’s an unapologetic riptide of difficulty. It’s always better to introduce difficulty in a leveled fashion instead of just dropping the player into a pit of pain after a few piss-poor tutorials. The inconsistency present because of this flaw is glaring.

Despite suddenly throwing so many animatronics at you, and at a pace that even they apparently keep up with, Fnaf 2 is a spectacular horror game and the best of the series so far. For all the plot holes and mysteries present in the lore, the upgrade to a fully-powered building and the startling lack of self-defense means keeping the formula fresh. Once you’ve cleaned your underwear, you’ll want to go back and throw yourself at the game’s challenges again and again. For the problems present in the animatronics’ randomness, it does produce good replay value, and bonus nights available after the main game will give you the opportunity to see just how hardcore of a night guard you really are.

Though… again… how desperate are you for money that you came back after the first night?

You can buy Five Nights at Freddy’s 2 here.