Search the ruins of Rapture for a desperate escape from the briny.

Oh boy. What a topsy-turvey schedule we’ve been on. I apologize for getting this out so late, but I wanted to go back and play this game one more time to make absolutely sure I know what I’m blathering about. Yeah, it’s not worth fretting over so much, but this is my favorite series. And Episode Two is quite the finale.

Episode Two of the Burial at Sea adventure picks up immediately after the events of Episode One. Having guided an amnesiac Booker DeWitt through Rapture in search of a little girl, you now take control of things from Elizabeth’s point of view. Shit is not looking good; Booker has suddenly disappeared, you’re trapped in a sunken skyscraper, and the little girl you came to find is now in the clutches of gaming’s most infamous revolutionary.

Atlas. It’s been too long.

Atlas, whose working-class revolutionaries want to depose Rapture’s unfeeling capitalists, agree to hand little Sally back to Elizabeth if she can find them a way out of the department store you’re trapped in and back to Rapture. Easier said than done; the Fontaine Department Store is nearing the bottom of an ocean trench and is no less filled with the mutant maniacs you fought as Booker in Episode One.

Right off the bat, playing as Elizabeth is about as stark a contrast as can be to the gun-toting Booker DeWitt. To my delight, I found that Episode Two is geared for stealth. Players have to sneak around large groups of enemies, avoiding noise hazards like broken glass, in a quest to slunk about the department store looking for the exit. Elizabeth can still wield guns, but she’s weaker than a paper bag in a gunfight, so stealth is really your only option. 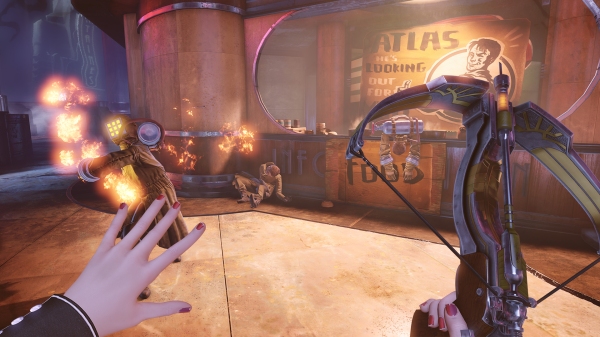 Huh. I must have fireproof nail polish.

I jumped into Episode Two ready to “Tear” shit up with Elizabeth’s godlike multidimensional powers. In BioShock Infinite you can direct her to pull things into this world from the beyond; everything from health to ammo to giant George Washington robots armed with mini-guns. Conveniently enough, Elizabeth has these powers stripped from her just in time for her protagonist debut. You still have access to your genetic plasmid superpowers, but this is nothing new. You’re quite vulnerable.

Overall, I was impressed with how well Irrational nailed the stealth gameplay, but it’s hardly innovative. Elizabeth gets a plasmid that basically rips off of Detective Mode from the Batman: Arkham series; helpful, but unoriginal. I also didn’t appreciate the implication that Elizabeth was too weak to fight off Splicers who’d noticed her. I get that we’re supposed to be stealth, but Elizabeth is not supposed to be a damsel in distress. The gameplay, however, disagrees.

The stealthing here is fun, but the reasons for being forced into it are not really given.

The gameplay also features the same go-here-and-press-button linearity of Episode One, but the environments are less linear in the bargain. You venture into an unexplored area of the department store, a sprawling neon bazaar of high-end shops. In addition to finding a way back to Rapture, you can complete additional treasure-hunting objectives akin to the storage chests in BioShock Infinite. Some of these have a lot of bearing on the plot, so it’s worth looking around to find them.

As with Episode One, exploration is key to survival. If Rapture was dangerous for a beefy dude with a gun, it’s triply so for a psychic lady with a crossbow. I guess. Anyway, looking around for water and toilet paper is helpful, and you’ll find more audio diaries as well. These tools provide background stories and have always been wonderful add-ons for the BioShock series. To this day, they’re the only video game collectible I’ve really ever cared to get all of. Those, and maybe the documents in Outlast. 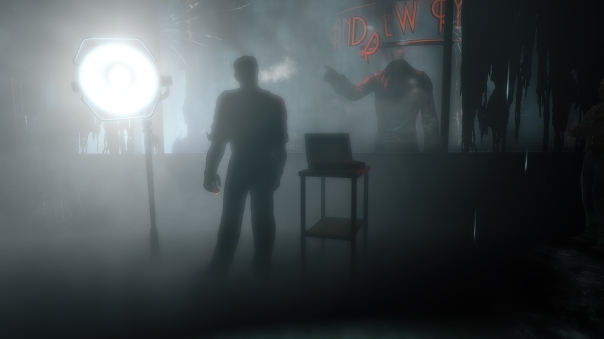 There are some creepy foes out there. Explore for supplies any chance you get.

Elizabeth isn’t alone in her mission to get herself and Atlas to Rapture. The gruff revolutionary keeps in contact with Elizabeth via radio, and Booker also chimes in from time to time. This time, the dialogue exchanges between the two are more cordial, and a lot sadder. They encompass a reflection on the whole crazy journey these two characters have been on, keeping that as much a constant character in this game as anyone else. Episode Two also features appearances from more of BioShock‘s original cast, including the vicious biologist Yi Suchong.

In addition, the game continues to feature the hallmark artwork of Rapture. Massive neon signs and unmistakable art-deco masterpieces are the orders of the day for Episode Two. Everything is beautifully colored and arranged; Irrational put a lot of effort into making these underwater stores and restaurants alien, yet so familiar. Each environment has also been layered with dystopia; bodies, empty bean cans and annihilated bathrooms. Those three things together are one of my worst nightmares.

Hey Splicers, I’ve got injections, who wants to party?

This grim beauty perpetuates Rapture’s tragic atmosphere, and that reinforces the plot’s very tragic roots. Anyone who’s played BioShock games will know that these titles have bittersweet endings, and none more so than Episode Two. The game succeeds at packing a lot of fan service into a narrative while keeping it fresh. Through Elizabeth’s kaleidoscopic perception of time and space, we see the common threads between the story of the original game all the way to now. Episode Two excels at introducing new mechanics and narrative subplots while staying true to the themes of both games.

Staying true to both themes is a strategy Episode Two plays on quite literally. You’ll visit a few areas of the BioShock universe you may not expect. The weapons, the mechanics and the level design all reflect these constant changes, keeping things fresh and interesting.

In the end, Elizabeth completes her evolution as BioShock‘s most interesting character. Even when playing as Booker in BioShock Infinite, that game was really all about her. Protecting her, rescuing her, witnessing her powers, and watching her change and grow over the course of the game. That trend continues in the Burial at Sea duology, and culminates with Elizabeth’s ultimate test of will. Will, the very thing that Andrew Ryan holds so dear and founded Rapture with so zealously. Elizabeth’s journey from ignorant optimism to grim determination is something truly special. The entire production from BioShock Infinite until now is among the best character writing in gamedom. It’s also a great representation of a strong female character, something the gaming industry is lacking direly today.

The ending of Episode Two is the ending of the BioShock series. The true Bioshocks, anyway. Ken Levine let 2K have the series but we all know that a BioShock without Ken Levine is not a BioShock at all. The game’s climax features a tapestry of all the journeys, all the struggles, all the characters that this wonderful series has brought us. The iron will of Andrew Ryan, the religious zealotry of Zachary Comstock, the anguish of Booker DeWitt and Songbird. All of this combines into an ending that literally brought me to tears, something that maybe five games have ever done to me. 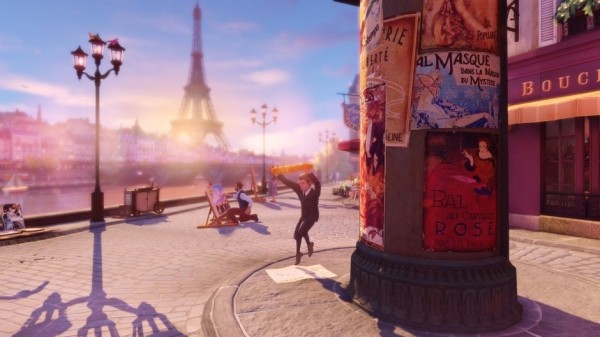 Burial at Sea‘s Episode Two is the best DLC content I’ve ever played. It clocks in at about four-to-six hours and its stealth-based mechanics lend it an identity all its own. Couple this with a story that condenses everything we’ve learned from BioShock into a single, tremendous finale, and you have something that I can’t really offer any more praise for short of a marriage proposal. If you listen to no other recommendation from me, DLC or not, get this game. Its gameplay has its flaws, but the narrative is stellar and the level design leaves a lot to explore in my favorite dystopian metropolis.