Stop an insidious alien foe from unleashing an endless army.

Half-Life 2: Episode Two has a somewhat messianic reputation in the video gaming community. It’s a well-made and charismatic game that solidified our faith in the franchise, but the Half-Life series has yet to return to earth and rapture us up to enlightenment. Still, we the Half-Life faithful await the return of one of my favorite sagas. In the meantime, there’s probably plenty of time for you, dear reader, to play the series and see why Half-Life 3 has been the most famous piece of vaporware for the last decade. A lot of it has to do with how good Half-Life 2: Episode Two is.

We once again face an issue of describing a game without spoiling its predecessor.

Well, in the previous game you were outrunning a nuclear explosion, and in this one you wake up in a derailed train far away from said explosion. Any spoilers that you may infer from that information are proprietary to you and I cannot be held responsible for them. (Phew). 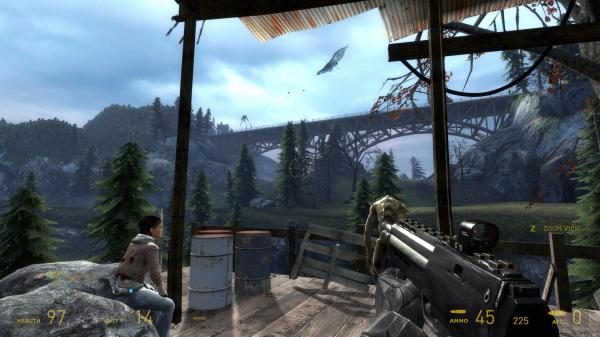 Silent protagonist Gordon Freeman, who’s more inclined to test his knowledge of physics with shotguns instead of lab coats, ends up in the wilderness outside of City 17 with sidekick Alyx Vance. Hot on their tails is the Combine, a terrifying alien occupation force that rules earth with an iron fist. In addition to chasing after some mighty important data Alyx stole from them in Episode One, the aliens are also keen on opening a portal to their home dimension and bringing forth endless armies to crush the human resistance. Your goal is to regroup with the human freedom fighters and stop the Combine before they can re-establish contact with their forces beyond earth.

To that end, Gordon and Alyx take off into a beautiful wilderness that recaptures Half-Life 2‘s original level design. Valve apparently took the criticism of Episode One‘s linearity to heart, and built Episode Two with the wide-open, interconnected hub areas seen in Half-Life 2. I was happy to see such an excellent return to form; although a few levels of the game retain that tight linearity, most of them have been expanded back into their ambitious original shapes. You’ll be able to wander the pines in search of supply caches, or enemies, as the situation warrants. 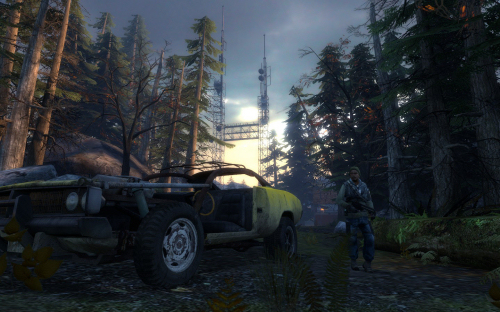 Episode Two expands Episode One’s budding repertoire of team-based gameplay with Alyx, but also makes room for a few Vortigaunt buddies. Valve once again nixed modifying its solid arsenal of first-person shooting, this time adding environmental abilities. You’ll receive special weapons and tools for turning White Forest against the Combine, and run into situations where the objects around you may be more effective than that rapidly overheating SMG. It’s a great way to keep Half-Life‘s gameplay fresh and is more innovative than just adding more guns.

The gameplay receives some much-needed variety, too. Episode One was all run-and-gun, and therefore not as much fun. Episode Two has its own share of shootfests, but you’ll also scale cliffs to get the drop on enemy forces and drive a car, just like in Half-Life 2. Along your journey, you can hop out at any time to creep into the pine trees in search of supplies. There’s something oddly relaxing about wandering through a decrepit old mining town and spending a half-hour rummaging through its buildings, wondering after the stories of the people who lived here before the apocalypse. It’s what I enjoyed about Half-Life 2, and it returns in full form here. 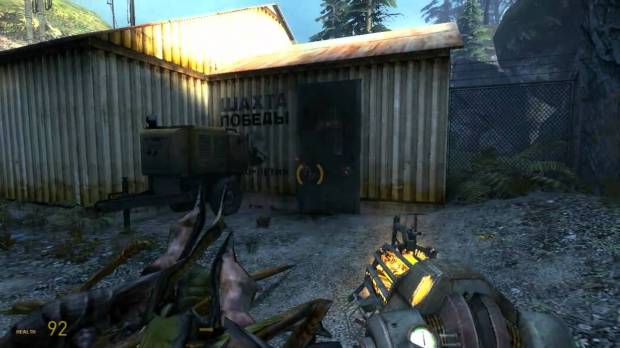 The plot of Episode Two is the most compelling Half-Life story we’ve seen so far. As I mentioned up top, the alien forces on earth have been cut off from their homeworld, and you have to prevent them from opening the portal back up and summing infinite reinforcements. These standing forces are still considerable, and there’s a long way for them to hunt you between where you stop off and where the resistance is headquartered.

The narrative as as well-written as ever, as we’ve come to expect from Valve games. Alyx undergoes some minor character development after a near-fatal injury hardens her heart against the enemy. As a silent protagonist, my character development lay primarily with my decreased reluctance to do ridiculous stunts with cars. You find ways to make it work. 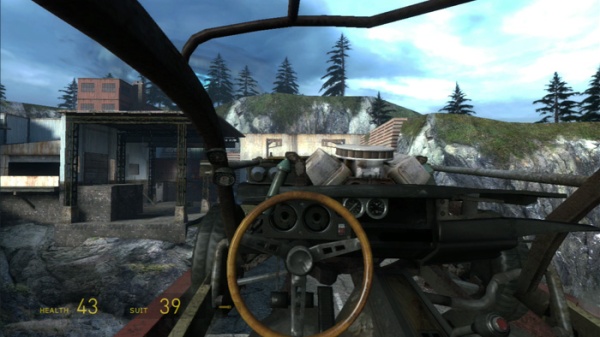 Episode Two also re-introduces the full cast of characters. I got weary of the resistance’s solidarity, but Episode Two shoots this in the foot by adding a cantankerous old douchebag named Dr. Magnusson. Brilliant? Yes. Genius? Yes. Asshole? Absolutely. And he’s the first human we’ve encountered who dares to think that Gordon Freeman might NOT be the messiah. A bit of conflict between characters never made a story boring, and it helps turn Episode Two’s narrative from an us-vs.-them saga into something a bit… grayer.

Each stop in the story is another race against the Combine. Episode Two ups the horror by adding more zombies than ever, lurking in dusty old mines and abandoned houses. You can expect quite a few firefights in the woods, but they have less to do with completing an arbitrary objective and more with ensuring pure survival, which brought me as the player closer to the characters. It’s a very dark story, between its scenes of resistance fighters being massacred and the poignant march of zombies through toxic acid, but it’s a satisfying follow-up to the decidedly less-epic Episode One. 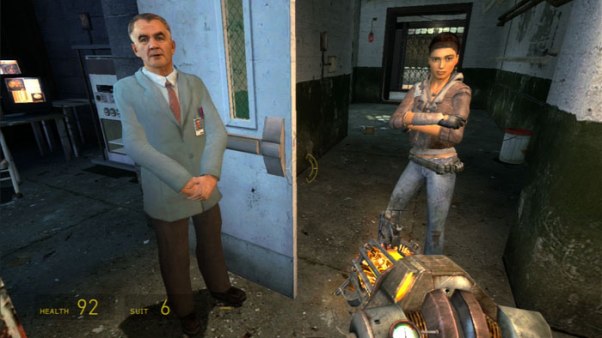 The look on Alyx’s face says it all.

I love Episode Two as much as I revile it. Not because it’s both a great and terrible game (though the vehicle controls need some work) but because it leaves the series hinging on a MASSIVE cliffhanger. I won’t spoil, but let’s imagine for a moment that the makers of Star Wars decided to end The Empire Strikes Back at the moment Luke learns that Darth Vader is his father. Vader says his piece, Luke looks horrified, and the screen cuts to black. That’s pretty much where Half-Life 2: Episode Two ends, and where the series has left off for almost a decade.

Because that’s where we’ve come with this series, haven’t we? Eight years since the last Half-Life release and nary a word from the almighty Valve about the cliffhanger’s resolution, much less a new game. There was supposed to be an Episode Three, but it was never released. I suspect that the breakout popularity of Portal, which was released alongside this game, did something to shift Valve’s development priorities, but this is just speculation. Whatever happened, the longer Valve takes to release Half-Life 3, the greater the expectation will be that the game is nothing short of amazing. Rumors and whispers pointing at its return pop up every year or so, but nothing has been substantiated with hard, Valvy evidence. Hopefully we’ll see a Half-Life 3 sooner rather than later, but between Valve’s last game release being two years ago and its recent focus on developing hardware, I wouldn’t hold my breath. 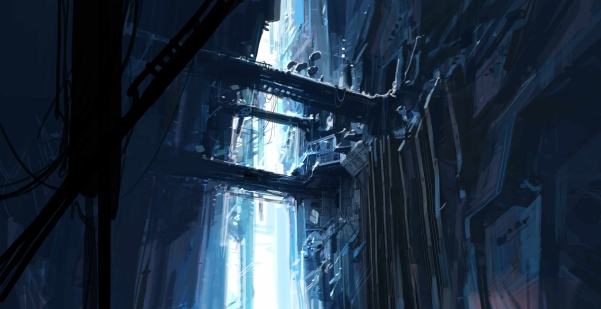 Some concept art for Episode Three. This was the last bit of media Valve released before cutting to silence on the Half-Life series.

Get it, please. It’s worth experiencing. But I warn you; you’ll start clamoring for Half-Life 3 just like the rest of us, and though it’s a cool club to be in, the wait is starting to get on our nerves.