Escape City 17 before it collapses into itself.

Hey Internet! Look at me reviewing another classic game! Go ahead and tell me how last-gen I am! Of course, being a PC gamer, the terms “current-gen” and “last-gen” mean nothing to me. I exist in a glorious tapestry where all video games are coalesced into a single set of media. None of this backwards compatibility bullshit for me!
On a more serious note, this is one of those classic games I somehow missed writing about in years past. I know, I know, how do you forget about a property like Half-Life?

Maybe we should ask Valve.

Half-Life 2: Episode One is a direct follow-up to Half-Life 2, starting off mere minutes after the latter game’s conclusion. Players reprise the role of Dr. Gordon Freeman, the crowbar-wielding physicist and humanity’s last hope against a totalitarian alien regime. It’s difficult to describe Episode One‘s beginning without spoiling the end of the previous game (for those very, very, very few of you who have somehow not played it yet) but suffice to say, the dystopian city you’re trapped in is about to explode. Time to haul asscheeks.

Gordon is not alone in his flight from City 17; the resourceful and ass-kicking Alyx Vance accompanies him throughout the entire episode. Gordon must work with the computer-controlled Alyx to devise an escape, setting the stage for a tense story not unlike a rougish prison breakout. 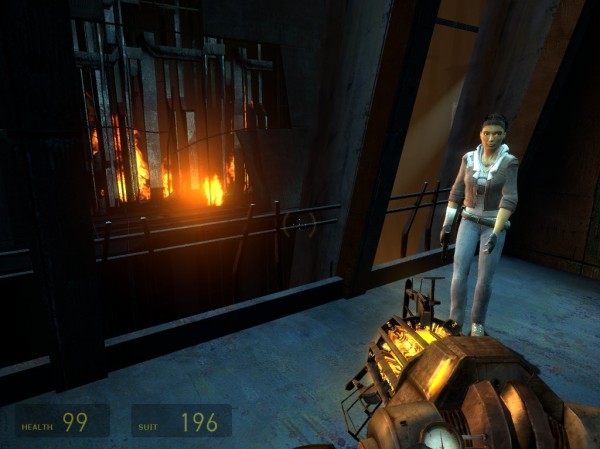 Right away, the first major difference I noticed after finishing Half-Life 2 were some improved visuals. The Source engine looks sharper, and new particle effects like falling ash enhance the game’s grim atmosphere. Episode One retains most of its predecessor’s visual assets, but a few new lighting effects, characters, and objects have been added to brighten the place up a bit. Like most Source games, Episode One‘s visuals have aged very well. The engine’s smooth, clean look coupled with silky world interaction has helped the game’s staying power even almost a decade after its release.

The game’s music continues Half-Life 2‘s mix of macabre and sci-fi, with synth-laden interludes and fast drum-and-bass sections for the combat bits. Like the first game too, Episode One includes lots of stark silence, which, when coupled with its postapocalyptic visuals, promotes a thought-provoking and deeply atmospheric experience. This isn’t like Neon Struct, where the absence of music only served to draw attention to its stark environments. Rather, the music-less sections here make room for the sounds of fire, the screams of dying soldiers, the drones of evil robots. It’s a good ole medley of creepy. 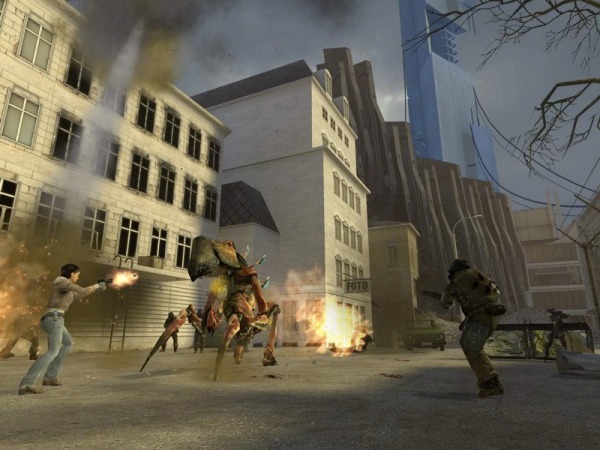 As countless critics before me have pointed out, Episode One‘s story is lackluster. That’s not to say that the dialogue is anything but well-written, thankfully, but the game’s short length combined with its simple escape goal lacks a grander point. You don’t get more specific on where you’re even escaping to until Episode Two. It’s just you and Alyx looking to hitch a ride out of the city. No character development to be found either. And yeah, a city that’s about to be sucked into another dimension is some epic shit, I’ll give Valve that, but two hours of running away does not an emotional and compelling video game make.

Oh yes, did I mention that it’s super damn short? When Episode One was released, Valve said that players could expect the credits to roll after about six hours. Uh-uh. In my first playthrough it took me 144 minutes. And I’m not that great at shooters, especially if my performance in Counter-Strike: Global Offensive is any indication. The game’s price has been reduced in the decade since, of course, but it was a silly move by Valve to charge full price for something so short.

Episode One’s story isn’t bad, but anyone who goes in expecting a Half-Life 2-caliber story is going to be mightily disappointed.

Gameplay in Episode One faithfully replicates that found in Half-Life 2, but there are new features I was impressed by. Rather than focusing on new guns or abilities, Valve put its energy toward improving your interactivity with Alyx. In the previous game she was pixels with a machine gun, but now she’s smartly programmed to work alongside the player, accomplishing team goals and fighting more resourcefully. I liked this part of Episode One because it not only made the player’s relationship to Alyx more tangible, but it also made the gameplay support the notion that we’re all gonna die unless we work together. Valve successfully programmed Alyx to help form a team, and that’s pretty rare in an AI sense.

The gameplay design in Episode One is also different from its predecessor. I liked Half-Life 2 because it was several hubs of open space. I enjoyed spending hours exploring the Lost Coast and rummaging through old houses, but in this game you navigate a very linear series of tight streets and corridors. Now, these are the people who made Left 4 Dead, so the linear level design is very damn good, but it’s still a far cry from the open, exploration-friendly worlds that Half-Life 2 encompassed.

What is a Half-Life game without zombies?

For all its linearity and lack of open areas, Episode One does manage to stream together some intense firefights. There’s a survival horror element implicit in navigating dark tunnels under the city, filled with zombies and giant bugs. Areas like this are where teamwork with Alyx are most crucial, because the slightest misstep could leave you overwhelmed by an enemy horde.

Once you reach the surface, the Combine show off some new ambush techniques and harry you as you try to reach the rendezvous point. This cramped, close-quarters fighting is fun, but it’s nothing that wasn’t already in Half-Life 2‘s final chapters. 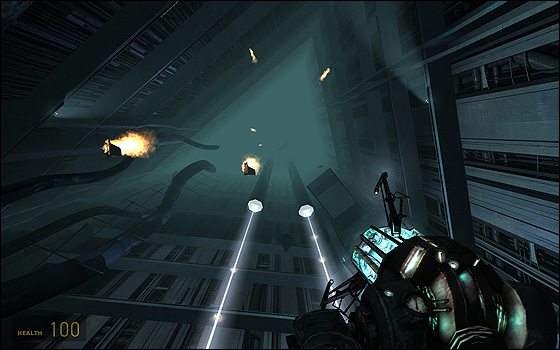 Half-Life 2: Episode One isn’t getting out of here without a recommendation. To be fair, the game’s short length is the reflection of its part in a greater whole, but its linear design and pond-depth story will cause a noticeable umph of disappointment with hardcore fans. Its atmosphere is still present and accounted for, but I was disappointed to see that Valve deviated from the trail it blazed with Half-Life 2 in favor of a more generic type of design.

I recommend Episode One because it’s the precursor to the epic Half-Life 2: Episode Two, the penultimate Half-Life game. I promised double-reviews this week to make up for last week, so expect a review of Episode Two tomorrow, and another double-review this weekend! SO MANY GAMES!

You can buy Half-Life 2: Episode One here.