Descend upon Washington, D.C. for an epic crime spree.

No, no, this wasn’t anything you readers have been bothering me with. This damn game is for sale on Steam so often, you’d think Valve made it and is now obsessing over it like a soccer mom. After seeing PAYDAY 2 on sale for what felt like the billionth time, I decided to purchase the game and embark upon a journey of self-discovery. I have since self-discovered that I have a crippling addiction to heists.

PAYDAY 2 is a co-op first-person shooter in which four players team up to rob banks, jewelry stores and anywhere else with money. Developed by indie studio Overkill Software, the game was deemed profitable from pre-orders alone, and has arguably dethroned Left 4 Dead as the epitome of co-op badassery.

After picking one of four clown mask-adorning psychopaths, players must team up to pick a heist location, case the joint, and then either conduct an under-the-nose stealth mission or bust in guns blazing. You can pick from an ever-growing list of locales to hit. Banks are the main menu item for PAYDAY 2, but you can also rob art galleries, diamond stores, shopping malls and nightclubs, to name a few places.

Pick a map, a mask and a loadout, and you’re all set.

PAYDAY 2 has some of the most in-depth character customization system I’ve ever seen. Everything from the color of your suit to the pattern of your tie is fair game. You can also choose different masks, and customize those as well.

Aside from the cosmetic customization, you must also put together a loadout that suits your play style. You’ll have access to the whole board of weaponry, from pistols to LMGs and even RPGs, though most of these you can only buy with your heist money. Weapons can be further modified with scopes, extended magazines and other items.

There’s almost nothing in this game that you can’t customize.

As you complete heists and gain experience, you can level up and put those points into your character’s skill build. PAYDAY 2 currently has five different skill sets to give players a chance to create their own niche.

Provide support and tactical expertise as the mastermind, plant EMPs and go in quiet as a ghost, or just blow everything up as an enforcer. You can pick and choose perks from within each skill set to make a class that’s truly your own. This amount of customization makes Payday 2 fun, because it doesn’t exclude your preferred method of gaming from some heisting fun.

You’re not confined to a single robbing discipline with PAYDAY 2. You can pick different skills from different trees to create your own niche on the team.

Heisting is typically a two-stage affair. Players enter the area without their masks on to case the building, looking for entryways, security systems, arrangements of guards, etc. You won’t be accosted by law enforcement in this mode, but you can’t do anything deemed suspicious, That is to say… anything except walk around. Once you get the mask on, it’s robbery time. You can go in quietly by lockpicking doors and hacking security systems, or barge in through the front door with weapons brandished.

There are a few elements that go into heisting: you have to control the civilians in the building by taking hostages and making sure they don’t make any 911 calls, while another guy starts up the vault drill. Going in quietly usually means that violence is an option, not a mandate, but you’ll have body bags for the guards who just won’t move the hell out of the way. Payday 2 will punish players for killing innocent civilians, which seems a bit arbitrary when it encourages you to murder legions of cops.

The combat gameplay is what you’d expect from an FPS. Aim the shooty-stick at something and squeeze the trigger until a sufficient amount of blood and entrails has been expelled from whatever you’re pointing at. You have a health bar and a Halo-style regenerating shield (represented by your armor, which I guess just repairs itself). You can get shot up and fall down, but if a teammate can revive you, you’re golden.

As for the enemies you face, well, they’re many. Combat-heavy heists will start you off with beat cops and heroic civilians, but the longer the heist lasts, the heavier the reinforcements. You’ll pepper legions of SWAT enemies with your bullets, and occasionally go up against top-tier private security forces. The harder the heist is ranked, the stiffer resistance you can expect.

Multiplayer games don’t usually have a lot of story, and PAYDAY 2 is no exception. But, to pay fealty to the entire point of this blog, each of the four main characters (Dallas, Wolf, Hoxton and Chains) do have some background. In this way the game is a lot like Left 4 Dead; the story is revealed through the characters’ offhand comments and through clues hidden in the environment.

There are also a handful of NPCs who are aligned with the PAYDAY team. Bain, an enigmatic criminal mastermind with a dry sense of humor, is your guide through most missions. Gage, a wheelchair-bound Afghanistan war veteran, supplies you with the military hardware used in your heists. Through him, you can also pre-plan your heists on a map of the building, and arrange for dead-drops, like C4, to help you out once you’re in.

Most of the rest of the cast are various underworld figures who hire you for more specialized missions, like blowing up cartel hideouts or dropping off cocaine. I was delighted to see that Giancarlo Esposito of Breaking Bad fame stars as a criminally connected dentist. Each of these characters reveals their backstory through comments and missions, or at least pieces of them.

PAYDAY 2 has high-quality graphics, especially for an indie game, but they’re not absolute top-tier. Not that I really care; the whole debate over graphical power has become kind of asinine. I don’t need the watches in the jewelry store to be perfectly circular, and the people who do either suffer from OCD (my sympathies) or have been twisted by COD, Red Bull and Internet trolls into… I don’t know, graphics police? Once graphics hit a certain level I can just roll with it.

The game’s artwork also incorporates a large amount of live-action footage, which you don’t really see these days. In-game briefings and cutscenes are all live-action, as you might have guessed from that screenshot of our boy Gus Fring. It’s probably cheaper than Diablo III-level cutscenes and it still gets the job done. It also made the game’s story and character interactions more believable when executed with real people. 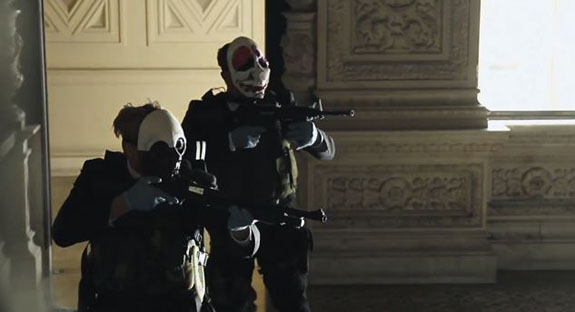 Live-action footage is also incorporated into most of the menu screens.

So why review a video game that not only skimps on narrative, but is multiplayer-focused at that? Simple: because PAYDAY 2 does something unique, and does that unique thing so well that you can’t not have fun with it. Sure, the story is confined to commentary from the characters and a few environmental clues, but I honestly haven’t had this much fun playing a shooter since BioShock Infinite came out two years ago.

The other element unique and compelling to PAYDAY 2 is the immense satisfaction that comes with executing a successful heist. Working with teammates to case the joint and haul out the money is entertaining, and the sheer amount of in-game cash will compel you to just keep going. Combine the fast-paced, damn challenging gameplay with a pumping soundtrack, and you have something that will keep you compelled for a long time. 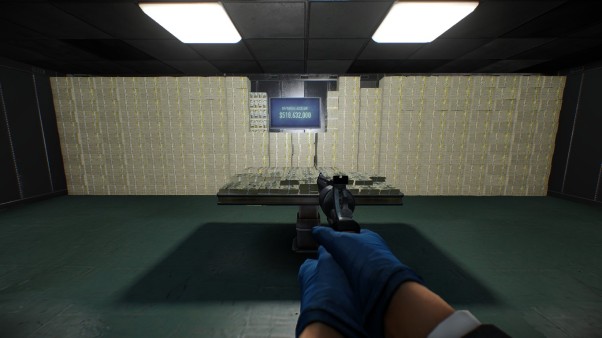 PAYDAY 2 doesn’t have a Gone Home-level narrative or any sort of groundbreaking storytelling, but its co-op gameplay, in-depth character customization, and fine-tuned robbery gameplay are the stuff of kids’ playground games made digital. So get some friends together and buy this game immediately. It’s on sale on Steam all the time, and new content is added frequently. These include new heists, weapons, and even characters. So get robbin’.

You can buy Payday 2 here.