Take the night shift at a pizza restaurant being stalked by murderous animatronics.

First, it was being alone in the woods with a faceless murderer. Then, it was being caught in a randomly shifting maze with blind bird creatures out to peck your heart apart. Now, a Short Horror Week finale visits a locale I’d never expected. It’s a Chuck E. Cheese’s facsimile that, granted, looks like a Chuck E. Cheese’s that Tim Burton might have designed. But, Five Nights at Freddy’s is the Short Horror Week III finale for a reason, which means there’s a lot more to being a night watchman at a pizza joint than one might expect.

Five Nights at Freddy’s jumped out at us from the indie scene about four months ago, and has since reigned supreme as one of the most popular indie titles of all time. It’s certainly one of the most viral video games we’ve seen in years.

The game’s mundane premise is that a summer vacationing teenager named Mike, your player character, takes a job as a night guard at Freddy Fazbear’s Pizza. On the surface, the place couldn’t look more innocent. Pizza parlors, rides and games, and even a floor show featuring a band of animatronic characters.

This place doesn’t seem so bad! I mean, it’s tacky as hell, but is this really a horror game?

But when night falls, after the kids have left the restaurant and you’re left to keep an eye on things, its veneer shifts to an eerie gloom. The cheap bastards who run this place lend you an office, armed only with a camera view screen and some (occasionally) functioning security doors.

So, as I settled in midst a plethora of old souvenirs and fast food wrappers, a message left for me by my predecessor told me that the animatronic characters of the Freddy Fazbear band “tend to get a bit ‘quirky’ at night”. But, whatever. On to an uneventful night. I decided to pull up the security feed to check on the puppets:

Okay, everyone’s all there…

But then I checked it again two seconds later.

Alrighty, time to check on- where the hell did they go?

The animatronic characters in this game are very much alive. They slip from their resting spots at night, to hunt you. They know where you are, but do you know where they are? Your only means of self-defense are checking the cameras, which slows their movement, and closing the heavy security doors that eat up your limited electricity (cheap bastards). Survival in Five Nights at Freddy’s means maintaining an intricate balance of both defenses.

Technically, this game is point-and-click. You cannot move from your location in the office, lest you get ambushed and torn to shreds out there in those dark hallways, those unlit music stages, those tacky-as-hell rides. All you can do is feverishly switch between camera feeds like a madman, using your mouse. You can also click to close the security doors and illuminate their exterior hallways. The animatronics can’t move if you’re looking at them, but there’s four of the damn things. Time to perform the world’s most terrifying balancing act. 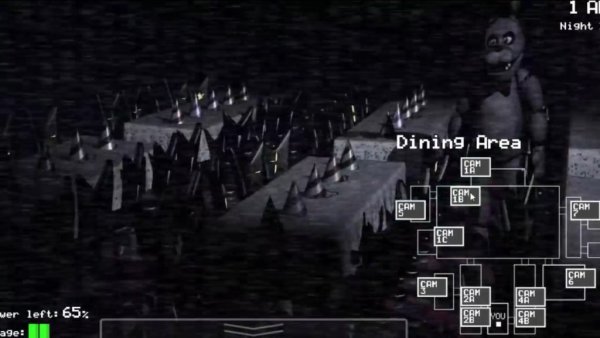 The animatronics move between rooms when you’re not looking at them. Lucky for them, you can’t watch them all at once.

Five Nights at Freddy’s is an exemplification of horror game creation. The game breeds enough paranoia to make Stalinist Russia look tame by comparison. Each of the five nights you survive last only about 10 minutes, but you’ll spend what feels like hours feverishly switching between camera feeds, hoping to slow the puppets’ approach toward your position.

Heaven forbid one actually shows up at your door, because if you don’t keep an eye on it, you’re dead. They can show up while you’ve got your eyes on the camera as well, so you have to rapidly switch between cameras and doors so as to not get jumped. If they do make it into the office, it’s game over.

The tension of Five Nights at Freddy’s is cut thickest in the unpredictability department. The characters are each expertly programmed to behavior unpredictably, moving randomly around the restaurant so that others can inch closer to you. This brings me to reiterate the mind-shredding paranoia I mentioned before, but the notion that one of those bug-eyed freaks could barge in and murder you at any second with the slightest slip-up is horribly frightening.

The second component of the game’s scares and screams are the stills. The game features very few animations, but when you catch the characters on film, the relief you might feel at having pinpointed their location is quickly crushed by the puppets’ unmistakable look of pure evil. 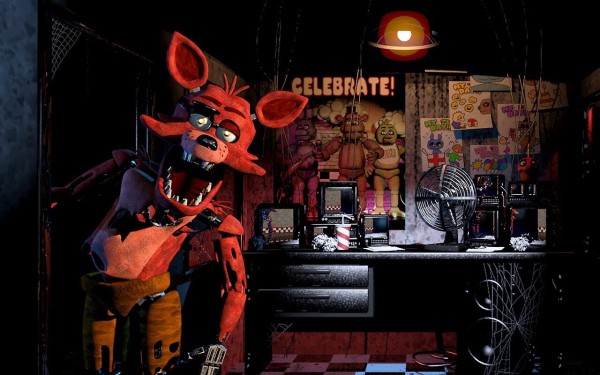 As you can infer from the look in that fox’s eyes, it’s no accident that they’re roaming the restaurant at night. They’re looking for you. They will find you. And if the GAME OVER screen’s picture of blood and organs stuffed into an animatronic suit is any indication, what they’ll do to you if they catch you makes the game even more terrifying.

All of this, of course, pales in comparison to when they make it into the office. 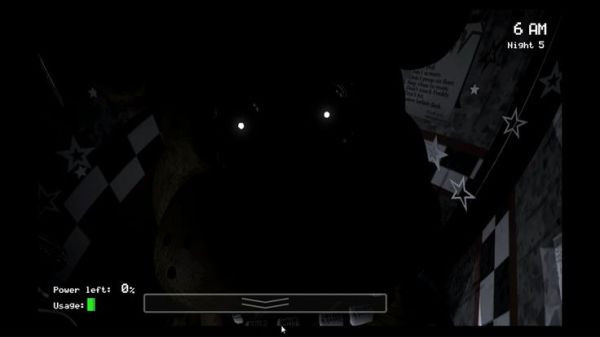 Ole Freddy Fazbear himself, giving me a very good view of his eyes through one of the feeds.

Okay, I’m a bit mentally exhausted just writing about this… what have we covered? The horrible paranoia, the tense unpredictability of the characters, the artwork creating pure dread… oh yes, did I mention that each night gets harder to survive? The characters become more aggressive as the weekend approaches (not unlike myself during a slow week), so you have to employ more strategy and reign in more fear with every round you survive. The game is emotionally exhausting.

Aside from the scares, the main reason why I love Five Nights at Freddy’s is because it utterly destroys the notion that you need money to innovate. The game is very cleverly designed, and that’s talent money can’t buy. Does the game look particularly high-budget to you? Because it’s not. And yet, despite what corporate apologists who support diluting games for too many audiences will tell you, a low-budget creation was still a success, all because of pure hard work and sheer design talent. 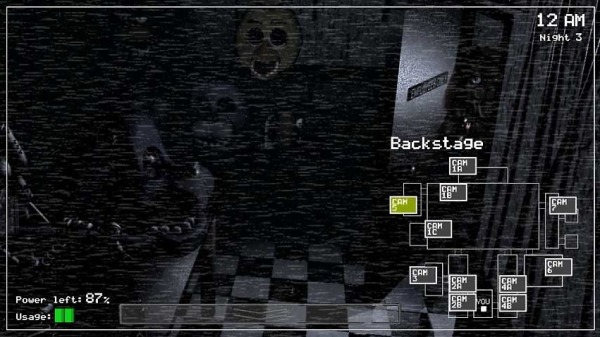 Game designer Scott Cawthon deserves a standing ovation for this masterpiece of horror and original game design. Not just because he did it all by himself, but because he has proven, as countless indie developers have, that a video game’s potential for success or failure comes from creativity and a willingness to try new things, something the Triple-A industry seems to have forgotten.

But yes, this game is scary as shit and you should totally buy it. Seriously. Go. Right now.

You can buy Five Nights at Freddy’s here.