One man’s list of chores descends into complete chaos.

Today, I was sworn at by two clients. The third and fourth ones insisted upon removing themselves from my project at work, and the fifth kept trying to impress me with her knowledge of search engine optimization, which held up about as well as a damp sock. I bring this up because the frustrations of the everyday are the epitome of Postal 2. That, and complete insanity. I’m not sure how else one introduces a game as controversial and peculiar as this, so in the spirit of peculiarity, AAARGGHAABALARIINOBLOSHAAA!!!!

Postal 2 is a first-person work of dystopia set in the fictional town of Paradise, Arizona. The story centers around the Postal Dude, a cynical and violence-prone man who must complete a series of chores over the course of one week. Players start the game on Monday, and are expected to complete such tasks as buying milk and cashing a check, lest the Dude return to his trailer empty-handed and suffer the wrath of his nagging wife.

The catch to this mundane-sounding premise is that the town of Paradise is insane. I mean that both in reference to the town’s deranged inhabitants and to the environment itself, which coaxes up a delicious sort of anarchy in its atmosphere. I set off to buy some milk at the convenience store, and no sooner had I tried to sneak out without paying than a security gate clanged down and Al Qaeda militants poured out of the woodwork. 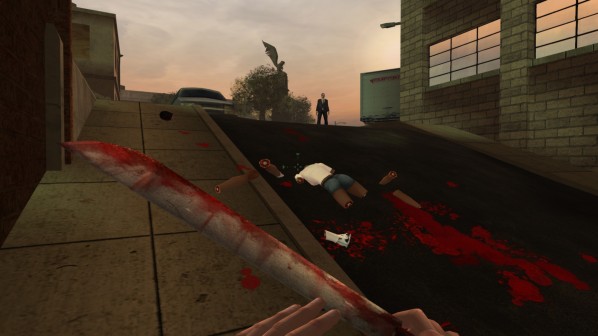 I waited until after escaping the store to gape at the absurdity of what I’d just seen, and quickly discovered that the Dude’s other tasks turn out to be as ridiculous as an Al Qaeda-run convenience store in Arizona (which actually makes a lot of sense when you consider that Arizona seems to be the center of religious extremism these days). Pick up the check? Get your office stormed by angry parents demanding decent video games. Cash the check? Fine, but waiting in line will draw the wrath of evil bank robber clowns. This is the entirety of the plot. Complete 3-4 tasks each day until Friday, enduring more and more ridiculousness as the week goes on.

The reason why Postal 2 has drawn so much controversy over the years is for examples like the convenience store. In addition to ridiculous stereotyping and racism, the game is extraordinarily violent. The simplest wounds draw gushes of blood and gore, and many NPCs throughout the game are dispatched spectacularly by everything from incineration to men in giant scrotum costumes. 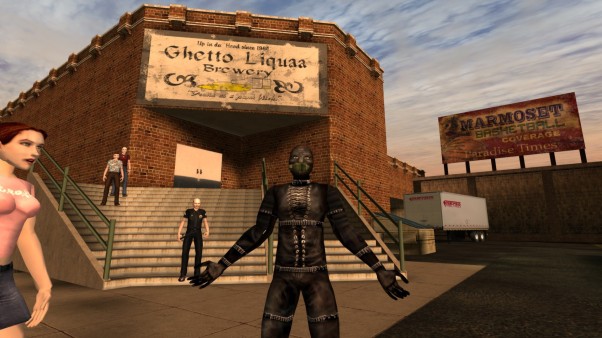 Well, I will be getting no sleep this night. This is hands-down the most terrifying foe I’ve ever faced.

There’s not much to be said for the Dude as a character. He has a deep, radio-worthy voice through which he projects his (justified) bitterness at the world, but he’s little more than a pair of eyes through which I experienced the town of Paradise. This decrepit little hellhole is a stark caricature of America’s vices, a land of materialism where greed and fear are the orders of the day.

Citizens and cops will often attack you for no apparent reason, and the Dude quickly makes enemies of its various factions. By Wednesday, I’d become the sworn enemy of the Parents for Decency anti-violence coalition, Al Qaeda, cannibalistic butchers, a marching band, a herd of elephants, a polygamy cult, the late Gary Coleman, and a cabal of homoerotic rednecks. 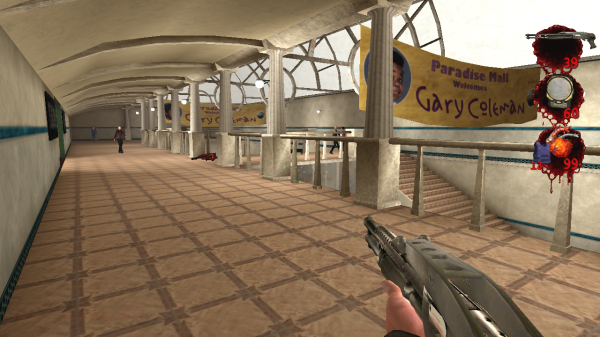 The town of Paradise is basically Satan wrapped in an American flag.

Gameplay in Postal 2 is a basic set of first-person shooting mechanics that work fairly well, though I have yet to understand why crouching and sneaking were relegated to separate buttons. The Dude has a variety of weapons at his disposal, including the usual pistol, rifle and shotgun but also throw-able scissors and exploding cow heads. Health is regained through first-aid and food. Similarly to GTA, you can draw the cops’ attention by committing crimes, but can reduce your “wanted” level by hiding behind a dumpster for 15 seconds. The gameplay feature that has received by far the most bile is the Dude’s ability to flash people, and urinate on things. There are achievements for doing both of these tasks. I’m not joking.

The developers countered the ruminations about the game’s violence by saying that you can complete the entire game peacefully, a counter I’d like to counter with the phrase “not frickin’ likely”. Even if you wait in line or walk down the street with your head down, the game will coerce and outright force you into violence. I became determined to wait in line like a good boy to get my book signed by Gary Coleman, but had to take action when the cops showed up. The game can put up “potentially violent-free” all over its packaging, but there needs to be a footnote that reads, “basically impossible”. 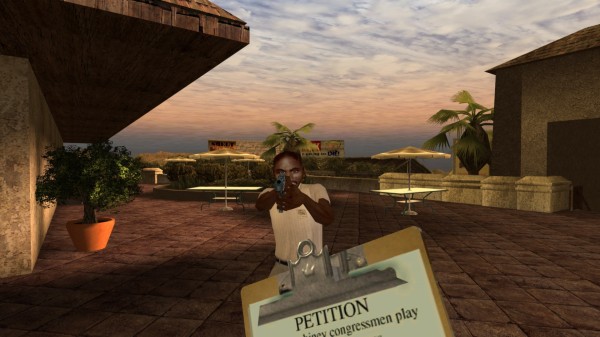 Reminds me of my ex-coworker from New Jersey.

If you’re still reading this, you’re probably wondering why I would bother to review such a disgusting, low-class mess of a video game. It’s not an unfair assessment to make; what do we have so far? Racist and stereotypical portrayals of Arabs and other minorities, as well as women? Over-the-top violence that allows players to brutally disembowel people in obnoxious and gory ways? Cruelty to animals, with elephant fights and using cats as gun silencers? Pointless, tasteless gameplay mechanics like the ability to pee on things and people, and smoking crack?

Perhaps a linear storyline that follows the Dude from one ridiculous sundry chore to the next, fighting off a new, random cadre of foes everywhere time he goes? The game’s title is a tasteless reference to “going postal” a term coined after a series of mass murders committed by public workers in the 1980s. 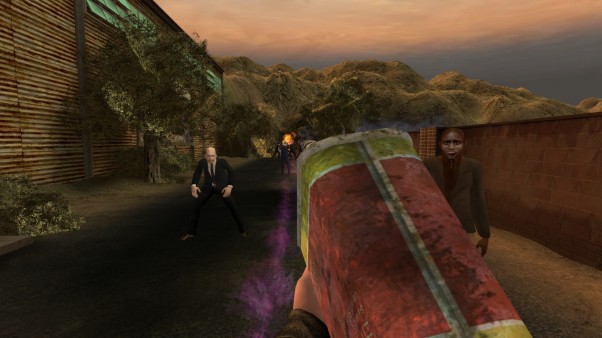 Here’s the thing about games like Postal 2. Its content deserves a lot of the controversy and criticism the game has generated over the years, but we have to consider the context in which the game is being presented to us. Shocking and deplorable as its racism and gameplay are, it’s all simply too brutal, too savage, to be taken seriously.

The people who criticize the game for being too evil are playing right into the developers’ hands. This content, much like an episode of South Park or a Marilyn Manson concert, is intended to provoke discomfort and controversy. It’s intended to spark a conversation about what is too far and what is fair. That is what Postal 2 sets out to do: to shock. This is its primary objective; nothing more, nothing less. 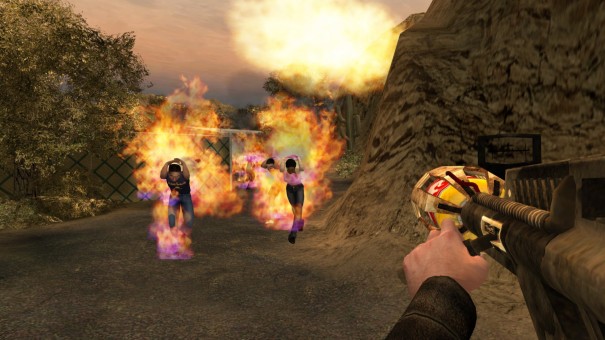 Was this put in to promote pyromania or to draw attention?

Beneath the ludicrous, I found Postal 2 to be a disturbing look at American society. It’s true, most people don’t actually eat entire tubs of donuts or take up book-burning to save the children, but Running with Scissors’ caricature of our media and our culture doesn’t go without some truthful undertones.

I think the racism against Arabs in this game, inaccurate and horrible as it is, reflects the simmering Islamophobia in contemporary Western society and politics, not any actual malice on the part of Running with Scissors. Of course, I can’t back that up with studio head Vince Desi’s promise to the same, but we now have to go back to the game’s over-the-top content. I can’t excuse the horrors of Postal 2 on everyone’s behalf, but I found the game to be a dystopian, anarchic and somewhat brilliant portrait of American media culture at its worst. 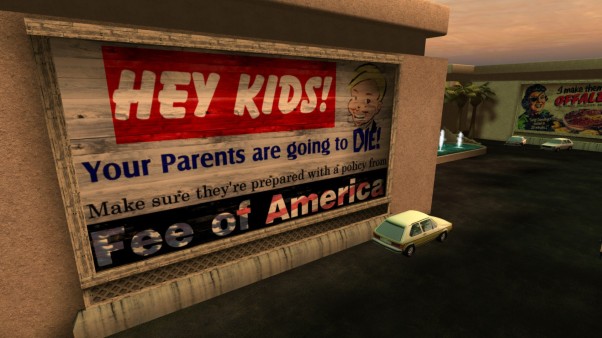 I could be wrong. For all I know, Running with Scissors really is a studio full of racist teenagers high on cocaine and Red Bull. But, once again, we have to consider the context in which this content is being presented to us. Shock value is what this game goes for. Its primary objective is to draw controversy, not promote hatred and violence.

I admit, though, that whether it does promote hatred and violence regardless of intent is a fair question. That question has dogged video games since the beginning of video games, and Postal 2 represents the epitome of that concern. In my short-lived career as a college resident adviser, one of my many shithead freshmen tried to argue that the beer I found in his fridge was not provably intended for drinking, but it was still beer, and he was still underage. It’s a fair counterpoint to my earlier argument. 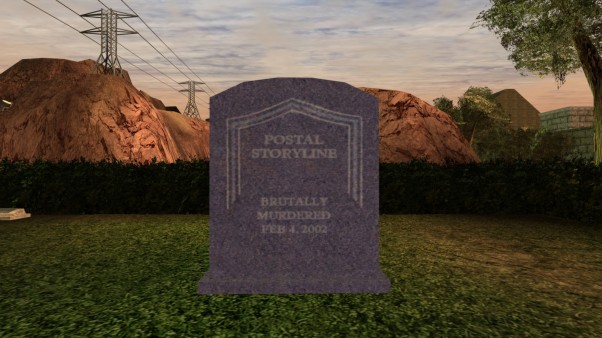 I think I wanted to review Postal 2 more for a discussion on shock value than the actual game. It can be entertaining at times if you have a dry, dark sense of humor, and the gameplay is workable, but if you’re not like me and prefer something besides irony for your three square meals, I’d look for games elsewhere. It is $10 on Steam for those of you who have taken a look at this review and want to explore the themes of shock value and content for yourself.

I just want to reiterate for my own peace of mind that I don’t know with certainty the intent behind Postal 2‘s design choices. Based on the game’s outrageous style, I’m inclined to sit in the shock value camp. At the least, I hope this review provoked an internal or external dialogue about media, content, and what should be deemed appropriate. Comment on this review whether you think I’m on the money about Postal 2 or huffing too much computer duster; I relish conversations about this stuff.

You can buy Postal 2 here.