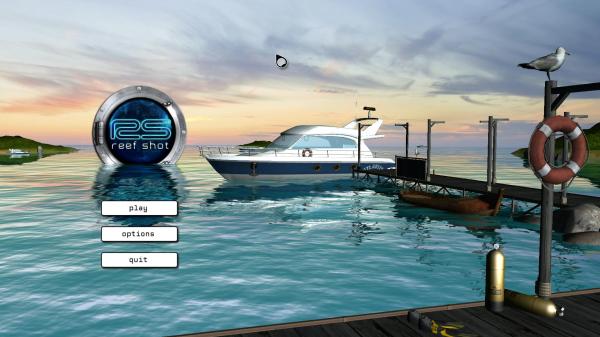 Photograph fish and underwater ruins deep beneath the ocean.

I have a friend named Tory. Tory does not care for scary stuff, including the cocaine addiction facsimile that I prefer to call a love of horror games. Because I’m such a caring, positive human being who in no way gleans sadistic pleasure from irony, I dedicated my first Short Horror Week and my review of Amnesia: The Dark Descent to her. Indeed, she inadvertently gave me the idea for Short Horror Week in the first place, so I’ve decided to repay her in earnest by reviewing a video game without monsters, death and scariness. Just fish. And photography. The latter of which is her life’s work. So, Tory, here is a very non-ironic video game dedication to you. I suppose you’ve earned it, since I’ve been torturing your Facebook wall with scary pictures for what, a year and a half now?

Reef Shot is an indie game of the underwater adventure sub-genre, a category that I’ve had mixed feelings about. The underwater adventure games I’ve played have mostly been incredibly dry and boring diving simulators, with enough attention to detail to strangulate your frontal lobe. I was relieved when the creators of Shark Attack Deathmatch threw all pretense of realism out the window in favor of a tense hunt for bloodthirsty sharks in the deep blue. Reef Shot abandons the simulation aspect in favor of a plot, which is an upgrade no matter what, even if the plot is flimsy as hell.

Anyway, Reef Shot follows two characters dispatched from some unnamed university to research marine life around the cheesily named Robinson Crusoe Island, ostensibly named as such to get me excited but in fact soliciting only an eyeroll. Really reaching for the stars of originality there, Nano Games. Might as well go all the way and just name it Treasure Island. Okay, just kidding. I did a Google search and apparently, Robinson Crusoe Island is a real place. I’m not sure if that’s better or worse.

I guess there are some hardcore Daniel Defoe fans among South America’s politicians.

Player character Scott is dropped into the ocean to catalog fish and other wildlife. He receives radio orders from Renee, a marine researcher and one of the most annoying sidekick characters I’ve ever encountered in gaming. You can hardly swim up to a school of stingrays without this airhead filling your ears with flighty fantasies about the ocean, and how happy she is that she can track your every. Damn. Movement. On her nifty tracker thingy. Joy to the world, Renee. I’m only glad that Reef Shot‘s own promotional blurb agreed that you’re annoying.

While taking pictures of some sea turtles, Scott comes upon a submerged cave filled with ancient Mayan ruins. This sets Renee off like there’s no tomorrow, and before long, the pair of them are dashing around the island’s shoals looking for El Dorado.

Your camera has a transmitter that alerts Renee to your presence. No option to turn that off, unfortunately.

From there, the plot is a linear series of deep-sea dives around Treasure Crusoe Dorado Island. Renee inexplicably knows where to find the ruins you’re to photograph, but can’t be bothered to dump you somewhere closer than 500 feet away from the target. Scott is a silent character; the only language he speaks in is pictures.

The story in this game attempts to be be compelling, but this noble mission is marred by several juvenile errors. The written segments and mission objectives before each dive are shot up with spelling errors, as are the subtitles. Even the most basic grammar editing could have fixed this problem, but it made the missions’ warm-ups feel lazy and uninspired. A few segments were missing entire words and clauses. 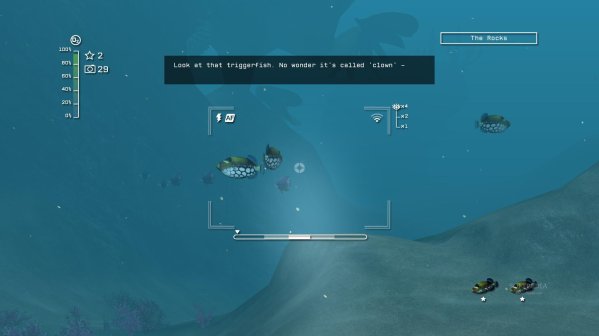 Renee provides the most speaking in the game by far, and this writing is shocked’n’clocked by the double-punch of bad writing and stilted voice acting. Her dialogue is usually awkward; she says things that people in no way will say in real life, and the cheesy voice job doesn’t help. She came off to me as a preschool teacher hopped up on a substance I can only dream of.

Secondly, the premise of Reef Shot isn’t exactly original. The search for El Dorado is one of the most well-trod and beaten-into-dust plots in all of storytelling, yet here it is, in its recycled glory, for us to pursue. Nano Games tried to brush it up a bit with a new premise as to the city’s origins and location, but it’s equally ridiculous: the Mayans somehow loading up their entire city onto a fleet of giant boats. This next gripe is a bit petty, I’ll admit, but why the hell would the Mayans set sail for the Chilean coast, when their civilization was half a hemisphere away, in Guatemala?

I must find a better story. Please, clown fish, assist me.

Honestly, I think Reef Shot would have been better if the story was just a sequence of fish sightseeing. That’s how the game starts out, and it’s quite relaxing, but this gets steamrolled by Renee’s mad hunt for El Dorado.

Perhaps she’s actually the game’s antagonist. You’ll get to take a break from searching for ruins to sneak off and take pictures of fish, but these interludes are few and far between.

I’d rather just chill with the fish, honestly.

The gameplay in Reef Shot is not without good, nor headaches. Scott can move through water just fine, and Nano Games actually included a button for simply rising up, instead of awkwardly moving forward while at a 75-degree incline (the usual method of moving upward in a diving game). Picture-taking is as easy as left-clicking, and you can also “sprint” short distances. This set of mechanics is hardly refined or advanced, but it gets the job done.

Then, just as with the story, Reef Shot begins sabotaging what was a pretty okay beginning. You receive points for your pictures depending on how good they are, and have the option of spending those points on just about anything. You need to spend them to get more air for your diving tanks, since Scott can apparently photosynthesize, but what grated my gears were the other options; you can pay Reef Shot with your pic points to tell you exactly where to go and what exactly to point your camera at.

Oh, I see. I can cheat without cheating? Circumvent the game’s challenges by completing the game’s challenges? I can take the reward I get for completing objectives and use it to just buy my way to the end? I’m not joking. You have the option of spending your earnings to buy off the obstacles of exploration and resource gathering and cruise nice and easy to the finish, microtransaction style. You’d think this game was made by EA or something.

What really pissed me off about Reef Shot was the camera. I was presented with a camera that worked fine; point at something, click once, bam. Instant memories. About halfway through the game I was presented with a supposedly more advanced camera that turns taking a good picture into a mini-game. The camera’s focus oscillates like an out-of-control pinball machine and you have to click at just the right moment to get a good picture. I didn’t know you could combine underwater cameras with goddamn Russian Roulette! But not to worry, you can pay the game your picture points to have your original, better camera back.

Perhaps Reef Shot‘s best and brightest redeeming quality is its artwork, level design and general atmosphere. Despite being a linear succession of diving missions, Reef Shot‘s actual environments are wide and labyrinthine. There’s a lot for the intrepid explorer to find, especially if you’re not up for paying the game to tell you where to go. A few missions are A-to-B trench swims, but most encompass large caves, reefs, and open ocean. These environments fascinated me as a small child.

Reef Shot‘s visuals aren’t terribly shabby. For an indie game, they could be a lot worse. The lighting and shadowing is within reason, but some of the environments are awkward. I scoffed at a mission in which I had to go into a cave to find some ruins, but the designers had just awkwardly slapped murals and statues onto random, crooked spots all over the rock walls. Most areas involving the ruins looked to be a bit of a lazy job, ironic considering the lazy story about said ruins. 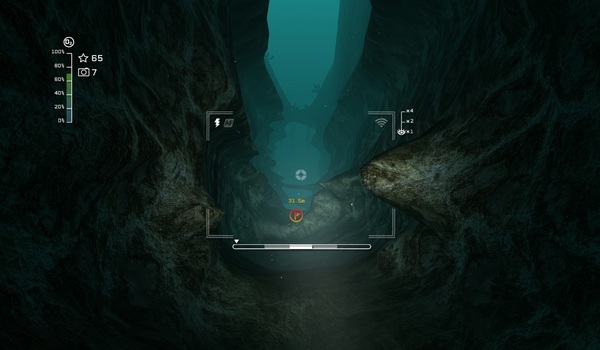 For its terrible narrative and questionable gameplay, at least Reef Shot’s environments are nice.

Despite its flaws, Reef Shot is not unplayable. In fact, it’s quite relaxing once you get past all the bullshit. The game combines its level design with a soothing, meandering soundtrack to produce a lovely atmosphere.

The wide beauty of the ocean lies before you. I focused on the fish and scenery rather than the ancient ruins and felt better for it. Of course, having to manually focus on something in order to appreciate it isn’t a mark in favor of Reef Shot, but there are still things to enjoy about it if you look hard enough.

As I write this, I wonder to myself why this game is still on my hard drive. Reef Shot isn’t a god-awful game, but it’s certainly not great, it’s just kind of there. A half-assed story combining one of the oldest tropes in the book with terrible voice acting and a nonsensical plot does not a great tale make. The gameplay is flawed, to say the least, with in-game microtransactions that anyone even half-decent with the game’s camera could use to buy their way to the finish line.

The game then compensates for its own features by artificially inflating the challenge; rather than do something more intuitive, like make the ruins hard to find, it sabotages its own mechanics with the bizarre camera. It’s a mess. Occasionally tranquil and relaxing, but so is a nice bath or an evening at home, neither of which you have to pay ten bucks for. I’m sorry, Tory. Maybe I’ll find a more fitting game for you in the near future. Because peaceful won’t cut it for Reef Shot. That said, I did only promise a peaceful game, not an amazing one.

You can buy Reef Shot here.