Stop a murderous psychopath in the Arizona desert.

Time travel is one of the world’s riskiest plot devices. A story that packs too many realities can threaten to get sucked up its own butt. Alan Wake’s American Nightmare packs this issue and others, but I decided to revisit the game anyway after finishing up Short Horror Week II. I wasn’t ready to be done with spooky games and while the first Alan Wake isn’t that spooky, I decided to drop in on the franchise to see if it’d redeemed itself.

Despite sabotaging its own scares, Alan Wake was, by most estimates, a good game. So it was weird to see that the follow-up to a major title took the form of a low-key arcade download. American Nightmare is billed not as a sequel, but a “standalone” Alan Wake game. Why do people use that term? It takes place after the first game, and it features things that happen after the first game. It’s a sequel.

Anyway, two years or so after Alan Wake, the series’s titular novelist is dropped into the Arizona desert in the middle of the night. The game takes enthusiasm at in medias res to new heights. Alan has apparently been battling his evil doppleganger, Mister Scratch, for some time. Our entry point in the story is pretty far along that conflict.

Mister Scratch (right) is apparently Alan’s evil twin, crediting himself as “the Alan who has the balls to do what you never did.”

As my confusion at having an evil twin was starting to reach a fever pitch, I noticed that Mister Scratch was commanding groups of Taken, the shadowy fiends from Alan Wake. Mister Scratch is the creatures’ new leader, and is hell-bent on killing Alan and taking over his life.

Making this game more confusing is that Alan appears to have written it. The novelist has the ability to rewrite reality, and jumps into this world knowing exactly what to do and expecting you to as well. It’s a bit stupid how Alan kept yelling at himself to run at this and sprint at that with very little context for the player. If this was an attempt at building intrigue, it was clumsily executed.

I’m not digging the “he knows but the player doesn’t” model of storytelling.

In order to defeat Mister Scratch, Alan has to reenact the novel he wrote. Most of the game is spent running around nighttime Arizona with this goal in mind. You have to investigate hotel rooms, fix cars, and blow up oil rigs. As that sentence implies, these events felt completely random.

Alan has to do all this while battling the Taken, the malevolent demon-spirit things from the first game. Like before, the Taken seem to be working-class ghosts, counting firemen, lumberjacks and miners among their numbers. A bit strange, but whatever. 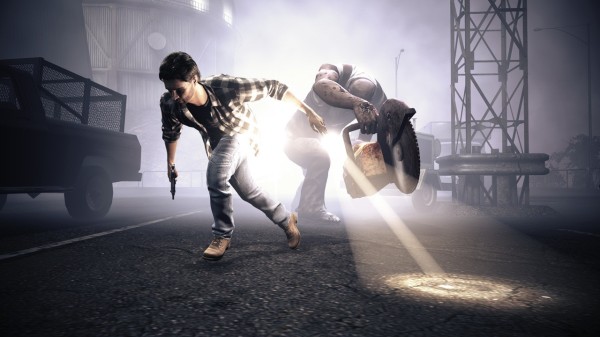 HOLY BALLS! Who brought in the Tanks from Left 4 Dead???

American Nightmare’s gameplay is exactly the same as Alan Wake‘s. To defeat the ghosties, you have to shine a light at them until they’re stunned, then shoot them. Shooting at a ghost has never made much sense to me, but perhaps the bullets are silver? No, wait, that’s werewolves. I don’t know.

Once again, the Alan Wake games erase their own tension by pointing the camera at approaching baddies, so you’ll always know EXACTLY from whence they spring. I really have no clue whose idea it was to implement that system, but they have no understanding of suspense. Horror doesn’t come from something nasty, or darkness; it comes from the fear of something nasty being in the darkness. This ideal sails right over Remedy Entertainment’s head, making this game, like the last one, a slightly unsettling shooter rather than a horror game.

How am I supposed to be scared if I know when and where the creatures are coming from?

American Nightmare is also intentionally repetitive. The entire game comprises three areas that you’ll visit three times apiece. Alan divulges that he’s stuck in a “time loop” with Mister Scratch, which he can only fix by reenacting his book exactly as it was written. But, he can’t remember his own writing, because multiple times Alan has to go back in time and start over in the first area again. Confusing much?

This feature made me frown a bit. I understand that there’s only so much to be put into a downloadable title, but if Alan wrote the book, why can’t he remember what to do? Amnesia is the title of a great horror game but it’s also an overused plot device. This game just expected me to expect that, because if Alan had a reason for his forgetfulness, he didn’t state it. 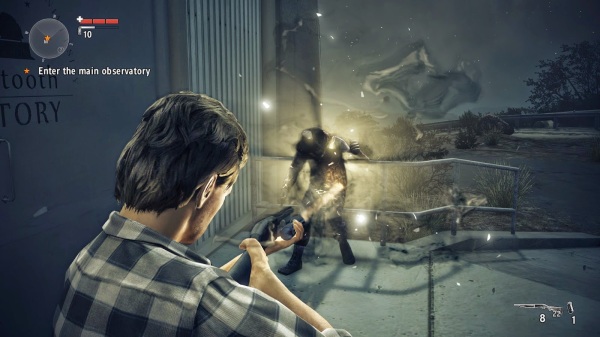 You have to revisit the same trio of areas three times. The puzzles change a bit, but going back over and over becomes tedious.

Finally, the writing in this game is… well it’s not terrible, but it’s certainly a significant step down from the first game’s script. Alan has stilted, tedious conversations with various characters, all of whom are three conveniently placed, attractive women (one per area). Alan seems to have been dumbed down a bit from the eloquent character of the first game, and the three women you meet are little more than breasts with quest markers hovering overhead.

Which I realize is a hallmark of this industry but… yeah, just kidding. The writing in this game is terrible. 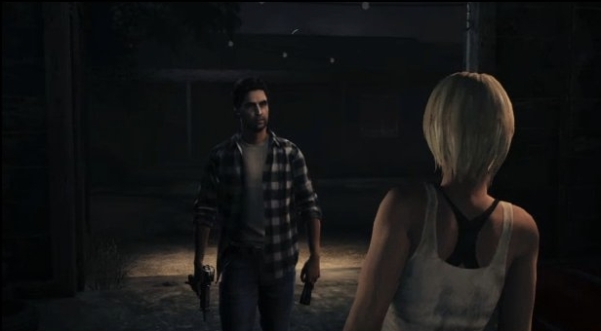 “Hi, this is Alan Wake’s American Nightmare. We seem to be having some trouble with script writing, so just stare at these for a while.”

The game does receive a good bit of polish and has noticeably better visuals than the first game. The environmental design is solid enough but it’s a little simplistic. Most areas are, for all intents and purposes, empty lots with rows of doors you can just peruse at your leisure.

The game lacks the claustrophobic turny-aroundy environmental work that makes horror games that much scarier. And since you revisit the same three areas three times over, the well of exploration has run dry 33% of the way through the game.

See? Look, even Alan’s getting bored.

Like the Brotherhood and Revelations installments of the Assassin’s Creed series, this game feels like it was made out of obligation rather than inspiration. Alan Wake 2 is in the works, and I advise Remedy Entertainment to cling to that “standalone” line as much as possible, if only to distance the sequel from this below-average horror-shooter.

If you’re just passing through looking for new gems, then no. Hardcore Alan Wake fans should only bother with this game if it’s on sale or something. It’s not a terrible game, but it does nothing well and some things badly. Even if I hadn’t come off of a seven-day stint of terrifying indie games, I would’ve gotten bored with this. It’s just not worth it. On top of that, the phrase “American Nightmare” or “American Horror” is perhaps the least informative phrase in the horror genre. Is it because… it takes place in America?