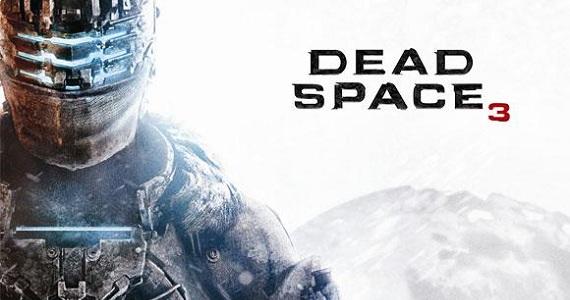 End the Necromorph threat once and for all.

I am about to say some pretty harsh things about a video game. I want everyone to understand that I don’t enjoy writing scathing reviews of video games. I honestly don’t get some sort of sadistic high from annihilating a piece of artwork that I paid money for. The vigor with which I write negative reviews stems not from homicidal glee, but the rage that comes from knowing a game could have been better. Dead Space 3 is such a game, but its downfall is due to a complicated variety of factors that are affecting the entire gaming world, not just this series.

Just to recap real quick: spaceship engineer Isaac Clarke has survived two rounds of combat with corpses that have been reanimated and recombined into salivating undead monstrosities. First, it was on a giant mining ship. Then, an even bigger space station. Now, Isaac thinks he can end the Necromorph threat forever, this time on an icy planet far from civilization. Hot on his heels are Earthgov, humankind’s authoritarian government, and the Church of Unitology, who worship the Necromorphs as the universe’s most slobbery definition of afterlife.

Some time after the events of Dead Space 2, Isaac is sprung from his safehouse on Earth’s moon by two rogue Earthgov soldiers, who tell him they can stop the Necromorphs forever. Isaac is put on a team destined for Tau Volantis, a frozen world whose coordinates were until now lost to history.

Isaac and his friends find Tau Volantis and set about exploring the planet.

Isaac isn’t sure that Tau Volantis holds anything of value, until Necromorphs burst out of the snow and begin scything at his head. The planet is also littered with the 200-year-old ruins of a rebel fleet, who arrived to the planet centuries ago for reasons unknown.

After a rough landing, Isaac begins exploring this harsh new landscape, seeking an end to the Necromorph threat.

Well… I think we’re onto something.

Compounding this disturbing revelation is a more personal annoyance; Isaac’s on-and-off girlfriend Ellie is now dating another member of the team, giving him plenty more to be upset about and putting the three characters at odds. A little interpersonal conflict never made a story boring!

Well… this is awkward.

Dead Space games don’t believe in such a thing as too much no. A Unitologist army inexplicably arrives to the planet on Isaac’s heels, deploying fanatical soldiers to hunt him down and kill him.

These dudes are led by Jacob Danik, a true bastard who redefines British smugness.

Danik is the new leader of the Unitologists, who believe that the Markers will lift mankind into paradise via undeath.

With all of these elements in place, the stage is set for an epic race to the truth of Tau Volantis and the origins of the Necromorphs. On its own, the story is compelling, and Isaac continues to evolve as a character. He grew into an uncertain engineer in Dead Space 2, and becomes a grizzled leader in 3. John Carver, another major character, is a cynical, angry soldier whose score with the Necromorphs is direly personal. Ellie Langford becomes more confident of a character after the action in Dead Space 2. And… that’s pretty much it. The new supporting characters are incredibly shallow and I cared that much less if they lived or died.

The questions gnawing at me throughout the series are the main themes of Dead Space 3. The race to find the origins of the Necromorphs brought an epic feeling to the whole thing, a true sense of “this is what we’ve spent two games fighting for and now we’re at this precipice”. Even though this is the third game into the series, characters continue to develop and change. A team that should be united against a terrifying threat is anything but, differing in everything from approach to ethics to dealing with the crazy Unitologists.

The game does have a compelling story, I’ll give it that.

Ooh? A satisfying end to the series, with a good story and characters? Amazon, here I come! Do NOT dig into your wallet just yet; we haven’t gotten to the bad things about this game. And unfortunately, there are many.

To be frank, Dead Space 3 is not a horror game. It’s a slightly unsettling action shooter. The Necromorphs don’t even bother trying to jump at you or hide anymore; they just run at you making enough noise to set off a parking lot’s worth of car alarms. Remember how I mentioned a shift from horror to action in Dead Space 2. Well? Visceral kept on going with that. And going… and going… 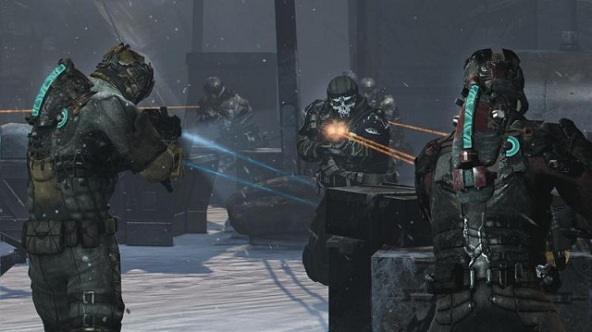 The claustrophobic discomfort I felt from the first game and, to a lesser extent, the second is gone in Dead Space 3. Monsters are easy to spot and easy to disembowel, because they use the EXACT SAME TACTICS as the previous games. For God’s sake, Visceral, don’t punish your fans! Spice up the gameplay by giving old enemies new tricks! Don’t just sick another identical horde of the things on me. I know how to do this. This isn’t scary and unknown, it’s routine as hell.

The game’s artwork is… meh. The graphics are good enough, I guess, but graphics don’t really do anything for me if the game they’re in is not compelling. Dead Space 3 certainly struggles in that department, and the environments feel hollow as a result. If nothing else, the failure of Dead Space 3‘s narrative is a great example of how a game’s story can affect everything around it. 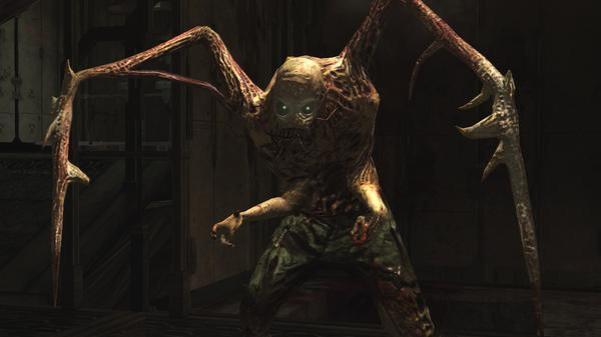 Seriously? This Necromorph uses the exact same attack THREE GAMES IN A ROW… and you expect me to be scared?

It really is disappointing that such a design oversight was allowed. You might say that this problem wouldn’t matter to new players, but how many people play sequels before the original? The progeny of gullible grandparents, perhaps, but no one who understands the significance of numbered installments. There’s only one new kind of Necromorph in this game and it takes only so long to figure out its dance (technically there’s two, but the second is basically a reskin of an older model). Combine this with the monsters’ utter lack of cunning or self-preservation from the very first game, and you have a pretty crap enemy.

Compounding the routine tedium with which I dispatched hordes of baddies was an absurd overabundance of resources. I was shedding STACKS… STAAACKS… of ammo and health packs because they were frickin’ everywhere. I had unlimited resources throughout the entire game and not once suffered a shortage. Not once. The materials used for making new stuff are also plentiful. With no challenge from enemies and no resource shortages, the primary principles of horror have been dismembered from Dead Space 3.

Health packs… ammo… what I really need right now is a recycling bin.

Another puzzling feature I found was a co-op mode. Horror games are scary because you’re isolated in a hostile environment. You can’t get scared if you have a buddy. I noticed that a few side missions in this game were also co-op only, so I paid money for that.

With Dead Space 3, this once-promising series has been sanitized, stretched out and left to piddle in third-person mediocrity. It has become another mindless action shooter and a far cry from the unsettling horror adventure aboard the USG Ishimura. It has a great story, but the absence of the first game’s horror motifs will leave you yearning for more. In that way, a perfectly acceptable tale becomes an unsatisfactory one.

“Bro, we gotta take the headquarters, carry me into the shooting before the noobs pwn your stupid ass! Dude, bro, let’s go!”

Here’s the thing, though; Dead Space 3 is not the perpetrator in its own mediocrity. It is the victim. Mainstream game development has become so expensive that studios have to water down their games, to appeal to as large an audience as possible. Dead Space 3 is a casualty in an unsustainable cycle, one I fear may soon blow up in our faces. EA’s CEO admitted that the game’s scariness was minimized so that more people would buy it, and Visceral had to sell five million copies just to meet Dead Space 3‘s development costs. Can you believe that?

Though I was disappointed in Dead Space 3, I empathize with it and feel sorry for it. It wasn’t a cheap gimmick like Brink or Lost Planet; it was what could have been a great game, broken by the out-of-control habitat this industry is wallowing in. And the cost of game development is only growing. This is a threat to the artistic originality of games; if all games must become mindless shooters in order to even meet their development costs, what’s the point? This problem has dire ramifications for game development, and I fear that Dead Space 3 is only the beginning.

You can buy Dead Space 3 here.