Save the world from the wrath of two goddesses.

I seem to have undergone a bit of a mediocrity bender recently. Not everything I’ve reviewed this past week were bad games in and of themselves, but their compiled flaws and problems got to me a bit. So, to remedy this problem, I decided to review one of my favorite games. It’s a simple game, but in doing so it avoids most of the problems entangling last week’s entries and stands out because of it. Outland is a game you should consider.

Outland‘s minimalist tale is of a man suffering from strange dreams. A shaman informs him that he is the latest reincarnation of an ancient hero, who saved the world 30,000 years ago, The hero stopped two goddesses from destroying the world, but they are on the rise once more.

Outland relies on beautifully written bits of poetry to tell its story. The passages are narrated by a shaman and explain the significance of your hero’s actions. These mostly pertain to what other characters in the game did to shape the world. The rest, though, is a story that speaks through color and music rather than words.

Oh my God… that is beautiful.

Outland is a 2D platformer bursting with beautiful imagery, and this is relied upon as the primary means of storytelling. The game is a single, glorious adventure of jumping, slashing and exploring.

The hero must explore five worlds, each with its own perils and beauty, in order to defeat the goddess’ minions and gain entry to their temple. Worlds include a lush jungle, a gorgeous city, and an unforgiving mountain.

At the end of each world is a powerful boss the hero must defeat to advance. That’s the hero in blue.

Outland‘s gameplay is the simple hopping, wall-jumping and sword-slashing platforming we all know and love, with an added element of challenge. The creatures coming at you are aligned with either light or darkness (blue or orange). Your character, uncannily, has both of these elements and can switch between them, which you need to do in order to defeat them (think Ikaruga).

Light enemies can only be touched when you’re in darkness mode, and vice-versa. You’ll also encounter obstacles made of light or darkness, and must switch to that element to pass through unhindered.

Some of these energy traps can get a bit ridiculous…

Early obstacles are a breeze, but more advanced traps require precise timing and switching between the elements to make it through alive. A few enemies have the ability to change their elements as well.

With each boss the hero defeats, you get a new power, like the ability to shoot an energy beam or perform a slide-kick (really should have started with the slide-kick). These will come in handy later in the game. You can also find heart pieces to increase your life-bar (which is NOT copying The Legend of Zelda because the hearts are GREEN, not RED). Other hidden trinkets litter the game’s environments.

Don’t play this game on drugs. Because that sunrise might just be beautiful enough to kill you if you’re high.

Outland‘s gameplay is smooth and instantly responds to you. Your character is a badass who can jump high, run fast and swing his sword in the blink of an eye. The game gets challenging, but it hits that magic number between easy and frustrating. Plus, any frustration you feel can be instantly negated just by gazing into those backgrounds (slobber). All of this gives Outland decent flow. You can slow down to enjoy the view or hop seamlessly between platforms, tree branches and enemy traps. It’s an exhilarating game.

Now unfortunately, there is one massive, rusty cog in Outland‘s otherwise perfectly oiled machine: the boss battles. There aren’t many of them, but this is a game where the bosses have twenty health bars and can take out half of yours with one swipe. The problem is that these fights have no checkpoints. Too many times I was THIS close to finishing off a foe, only for a stray energy beam to scrape my ass and force me to start a 20-minute battle all over again. So that’s frickin’ frustrating.

Outland‘s boss fights are a bit merciless, in the same way old-school Japanese arcade ones are.

So yes, the boss battles are a bit broken and require a lot of patience and energy. I still feel better, though, because all of my gripe about a game is piled into a single, neat place. The game is otherwise mechanically sound. It’s just fine 😀

Outland has, without question, the most beautiful artwork I’ve ever seen on a platformer and some of my favorite in the entire gaming world. The environments in this game are intricate and pulsing with life. This is brought into being most strongly by the visuals, which account for each delicate leaf on the ancient trees you traverse, or the magnificent flower gardens in the ancient city marketplace. Skies are rendered with brilliant blues and oranges, and backgrounds provide imagery of different depths to accent the game’s scale. Cutscenes feature even more detailed imagery that is JUST SO PRETTY to gaze into… 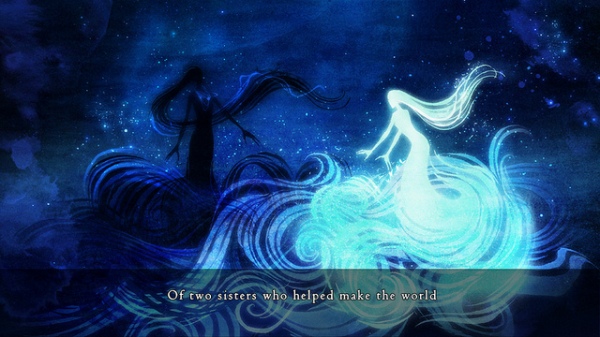 Outland brings the notion of “the arty platformer” to a whole new level.

I’m going to shut up about the artistic descriptions I pretend I know how to write, and just give you some more images:

(whisper: if you’re terrible at platformers, there’s no shame in buying this game just to stare at it). The music is gorgeous as well, combining tribal drums with flutes, strings and horns for a fast-paced, epic track. These songs intensify in the game’s final challenges. I could go on about Outland‘s artwork, but I think those images can speak on the game’s behalf.

Outland is a visual feast that happens to also contain beautiful music and flawless gameplay. The minimalist storytelling lets the visuals and artwork tell the tale rather than the spoken word, though this too is featured. This is my favorite platformer. Go get it. If you’re a PC gamer, join me in peppering Outland‘s developer, Housemarque, for a PC port.

(Psst. Hi! It’s Ian from the future, and Outlast did release on Steam! I’m editing all of my reviews today, and will post a link below. Hopefully I’ll avoid encountering Past Ian and initiating a time paradox. Thank you for reading!)

You can buy Outland here.