Get the girl and save the world in this retro-style cyborg shooter.

I find myself in the unusual position of having played a standalone DLC before the main game from which it sprung. This was a conscious choice on my part, partially because it made me feel special, and also to give Far Cry 3: Blood Dragon a truly standalone perspective, without any prior experience from Far Cry 3 to distort my opinion. The tables have turned on my future review of Far Cry 3, but Blood Dragon is nothing like the main game. If you bore witness to the Raw Deal, Crime Zone and Terminator era that was the 80’s, or want a chance to see what all the olduns look back on with fondness (or disgust), Blood Dragon is for you. Inspired by those and other 80’s films, this neon and synths-laden shooter is an unashamed shoutout to that era, one that I thoroughly enjoyed.

80s media have extremely high expectations for what we’ve accomplished by the 2000s, and Blood Dragon is no exception. The game is set in 2007, in a grim world fueled by cybernetics and advanced robotics. After learning that his mentor Colonel Sloan has gone rogue, player character and cyborg kickass Rex Power Colt is dispatched to an unnamed island. He’s accompanied by his astonishingly stereotypical black sidekick (wow, didn’t I already use that line this week?), named Spider.

Rex confirms that Sloan has indeed lost his marbles, and must navigate an eerie, neon-laden island rife with cybernetic soldiers and animals. He teams up with the lovely Dr. Darling, one of Sloan’s scientists. She helps him by analyzing the island’s many dangers. 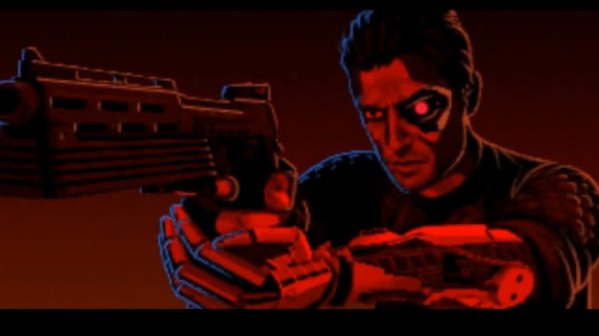 Rex Power Colt is the ultimate badass, shooting and stabbing his way across a large island.

It doesn’t take long for Rex to run into the titular blood dragons, massive creatures that feed on cybernetic flesh. Though possible to kill, I employed the game’s far-reaching stealth abilities in avoiding them. Luckily they can’t see, but they do respond to sounds. And by respond, I mean scream, bite and maim.

In true 80’s fashion, Rex employs an arsenal of signature phrases. Each time I killed a round of cyborgs by ripping their hearts out, he’d say “time to put your heart into it,” or “it looks like the heart of the matter”. Shooting and sneak attacks will garner such assuredly timeless lines as “he was dead tired”, and “I call shotgun. hehehe”. 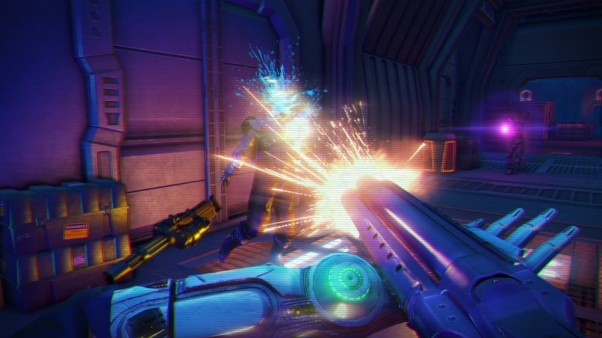 Guided by Dr. Darling, Rex shoots, stabs and explodes his way across Sloan’s island, fulfilling numerous objectives in order to take him down. All of these usually ended in a spectacle. 10% of the time it was something other than an explosion. The game is also full of some tongue-in-cheek references to 80’s geekdom. Rex can throw a Dungeons & Dragons 20-sided die to distract guards, and the game itself refers to scientists as Nerds.

Blood Dragon also aims to make itself more ridiculous as the game goes on. You encounter the standard ascending hierarchy of enemies, but even the island’s native fauna, including tigers, sharks and crocodiles, have become cyborgs. You also encounter zombies, referred to in-game as “the running dead”. 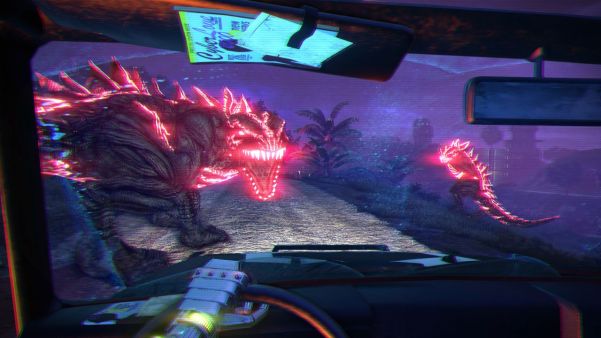 The game is sheer madness.

Despite having all of the hallmarks of a really cliche plot, Blood Dragon gets away with all of it because it’s fully aware of how ridiculous it is. Rex makes nuanced references to the cliches and obstacles he encounters, but these ironic observations make the game as much a dark comedy as an action shooter. The game makes it obvious that plot points that go unexplained have been left so deliberately, and then called my attention to that with a running gag or a subtle one-liner from Rex.

In addition to self-referencing its many plot holes, and then marking them with humor or a cliche, Blood Dragon’s plot is surprisingly engrossing because of the fun it pokes at 80’s action and stereotypes. Dr. Darling is the damsel in distress, Sloan is the mentor who’s gone mad, and Spider is the black sidekick who speaks of Rex in near-reverential tones. The game gives an I-don’t-care-how-many-explosions style of storytelling rather than minute attention to plot points. Because it is achieving these shortfalls deliberately, all the while never taking itself too seriously, Blood Dragon operates on a near-hipster level of irony, which makes the game more entertaining. 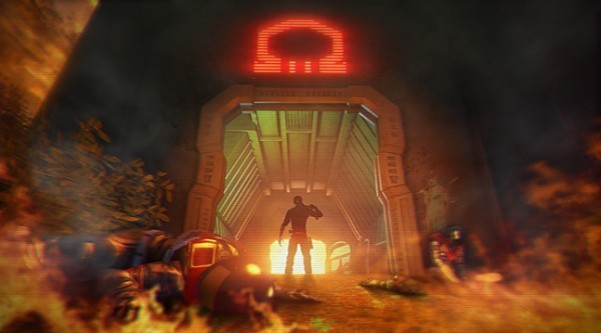 Blood Dragon has some of the smoothest first-person shooter gameplay I’ve seen in a long time. As a cyborg, you can jog across the island and take massive falls no problem. The game balances stealth and shooting quite well; Rex can alternate between shooting up a base with a shotgun, or rapidly stabbing a succession of unsuspecting guards. As a stealth fanatic, I found the latter tactic a refreshing addition to a genre overladen with screaming gunfights.

You can use a variety of tactics to play how you want. Rex can distract guards with the dice, plant explosives, creep between walls, or just shoot his way to an objective. I employed a colorful mixture of all of these things that got me through the game alright. These tactics make me excited for when I get around to the main Far Cry 3 game. 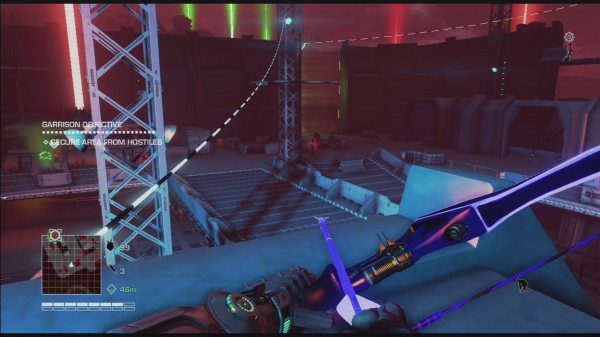 To my great joy, Blood Dragon hearkens to more than just 80s movies. The game’s menus and cutscenes are 80s-style in their presentation. I knew this was going to be interesting when I opened the game and found myself staring at a menu not too different than those of the old arcade games I used to play. The cinematics are usually short, but they’re similarly old-fashioned in their animations and presentation.

The actual game’s graphics are detailed and pretty, much like, I would assume, the full Far Cry 3 game. The island’s dark theme is made evident with purple and black hues. The island is overcast with crimson clouds dotted with searchlights, and the various facilities are blueish with lines of neon. The outdoor environments are accompanied by no music, just the slight robotic whirs of the island’s cybernetic animals. 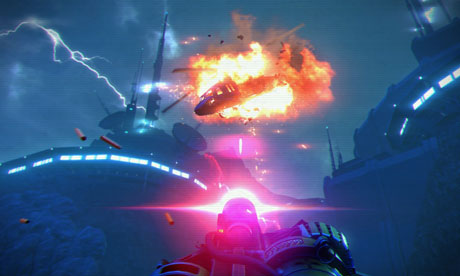 The score is just as 80’s as everything else about this game. Lots of overlaying synths and great whooshing drums, often played at a fast pace to hurry the player along through a bunker of cyborgs or in search of a nerd needing rescue. The voice acting is deliberately overdone to provide a greater sense of place and comparison to 80s action film. Altogether, it’s effective at provoking laughs and even some sense of epic-ness.

Blood Dragon‘s gameplay is fairly straightforward, making it friendlier to first-time first-person shooters. The game is $15 on Steam. I finished the main story in about five hours, but there’s probably at least 5-10 more hours’ worth of side missions and exploration across the island. If you want to immerse yourself in a tribute to perhaps the most notorious 80s-dom in America, or if you just want to pull off some sneak attacks and wrestle a crocodile, you might consider Blood Dragon. As I said up top, the game is a complete standalone, and does not require the actual Far Cry 3 game in order to play.