Save a troubled northern land from being annihilated by dragons.

Like a lot of people who have too much time on their hands, I love role-playing games. I love the massive worlds they encompass, and I also love the chance to take my own character on my own narrative. Such is the reason I love The Elder Scrolls series and such is the reason I love Skyrim, its latest installment. More importantly, here’s why you should consider loving it as well.

The Elder Scrolls V: Skyrim takes place in a high fantasy world not dissimilar to all the other ones out there, bearing commonalities with the worlds of Tolkien and C.S. Lewis. The game focuses on the titular land of Skyrim, a Scandinavia-like realm of mountains, tundras and mead halls.

Players can pick from 10 races and customize dozens of facial features when creating their character.

Just as your character is about to be beheaded, a massive dragon comes out of nowhere and begins destroying the town. No dragon has been seen in Skyrim for centuries, and you’re able to escape as it sets the village on fire. You can choose to escape with the rebels you were arrested with, or the imperials who just tried to execute you. I would assume that for most people, the choice is obvious.

After escaping, your character is free to do as he or she sees fit in Skyrim. You can go your own way and perform hundreds of quests around the land, or embark upon the main story line. I opted for a combination of the two, but we’ll stick with the main story for now. 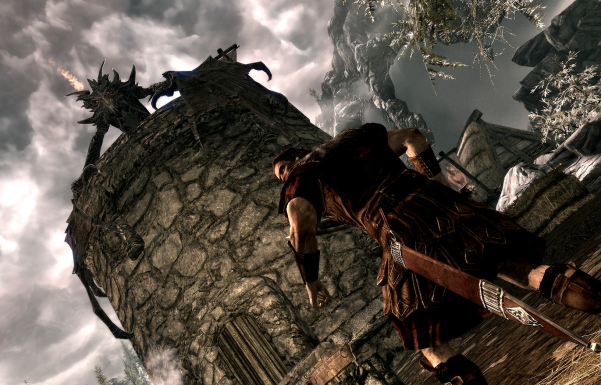 Hey, buddy? Before you cut my head off, you might want to look behind you.

Not long after escaping from the first dragon, your character finds himself/herself helping another city against another dragon. After slaying the beast, and absorbing its soul, your character is revealed to be a Dragonborn. Born with the bodies of mortals and the souls of dragons, Dragonborn can learn dragon shouts that can do everything from slow time to set things on fire. There hasn’t been a Dragonborn in centuries, and for one to appear at the same time as the dragons cannot be a coincidence.

Even if you choose to do some story missions early on, there’s nothing stopping you from wandering off to do other things. Skyrim is nothing if not an exemplar of open-world freedom.

You can absorb the souls of the dragons you’ve slain and learn devastating powers.

As if dragons weren’t a big enough problems, Skyrim is also on the brink of civil war. The empire has fallen on hard times since the events of The Elder Scrolls IV: Oblivion. It used to govern the entire continent of Tamriel, but most of its former provinces have seceded or been conquered by hostile powers. Trouble is brewing between the empire’s occupying forces and Skyrim’s natives. The Dragonborn can take part in this conflict on behalf of the empire or the rebels, shaping the story further.

If you don’t give a shit about any of that, that’s fine! You don’t have to fight dragons or rebels; you can take off into this beautiful northern landscape and do whatever you want. Kill the local bandit for some quick money. Get arrested for selling drugs. Break into every house in the nearest city! Skyrim is an excellent exercise in open-world gaming. There are various factions across the land that you can rise through and take command of, from the brave warriors of the Companions to the reclusive mages of the College of Winterhold. The Thieves Guild and the assassins of the Dark Brotherhood also return from previous Elder Scrolls games. You can do all of this however you want, whenever you want.

The number of quests in this game is ludicrous.

The ability to choose so many different paths of adventure is Skyrim‘s greatest narrative strength. Role-playing games don’t always have an emotionally endearing central narrative or great character development, and Skyrim is no exception. The effort of Skyrim‘s narrative lies not in its writing, which is not amazing, nor its voice acting, which is pretty okay, but all the ways in which you can interact with the world.

I’m not ashamed to admit that I create an internal narrative every time I play a big role-playing game, and I think most other Skyrim players would agree. You become attached to your character in a way that games with scripted characters cannot provide. For a game to provide so many ways to interact with this big, beautiful world is outstanding. 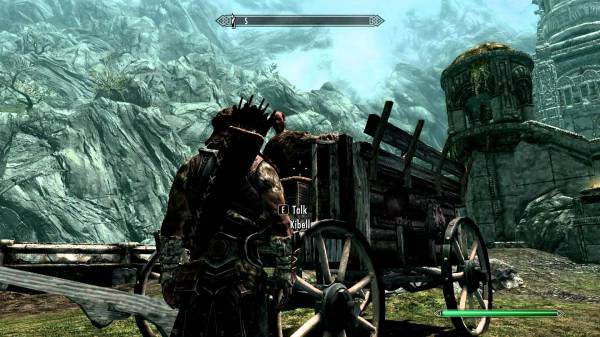 The world is yours to shape in Skyrim.

The size of Skyrim is the most beautiful thing about it, but it also leads to a lot of problems. A game of this size can’t be free from bugs, and Skyrim has loads of them. From a few minor quests that can’t be finished, to laughable physics bugs that tumble characters around like laundry, there’s no shortage of unintended hilarity in this game. Of course, not being able to drop a quest-essential item even after the mission is finished is a bit more frustrating.

Luckily, Skyrim‘s gaming community stepped up where Bethesda stumbled. There are patches available for download that fix hundreds of bugs throughout the game. There’s no such content for the console versions, unfortunately, but the patches are free and fill a lot of potholes. These patches are great, but it’s regrettable that Bethesda let so many problems slip through the cracks. 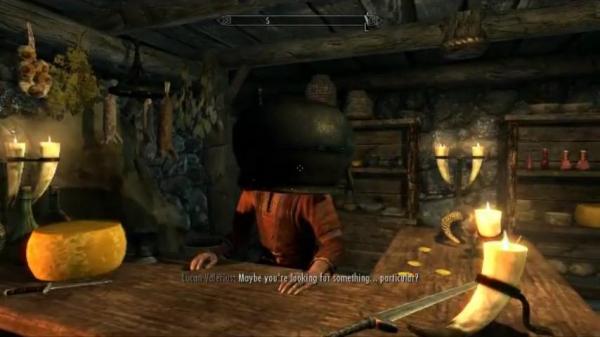 You can steal things from a shopkeeper if you put a pot on their head. One of Skyrim’s many, many flaws that can be exploited for hilarious gain.

If Skyrim‘s bugs can break immersion, its artwork will draw you in immediately. I’ve played plenty of games that had large and beautifully detailed environments, but Bethesda has created the most alive landscape I’ve ever seen with Skyrim. Tall, snowy mountains encapsulate lush vales full of saber-toothed tigers, woolly mammoths, and lots of other wildlife.

Salmon jump up river rapids and glowing mushrooms adorn cavern walls. The cities burst with sound and color, and everything has been carefully arranged around an ancient, Nordic motif. There’s a lot to see and hear throughout the land of Skyrim.

Skyrim is alive in a way that most video games are not.

It’s one thing for a game’s environment to be detailed, and quite another for those details to all be interacting with one another so well. Skyrim‘s narratives may not be emotionally exhausting, like some other games I’ve played, but you’ll never find a better composite of high fantasy adventures in all of gaming. The central narrative is yours to craft and yours to internalize.

Skyrim also features some DLC to augment the main experience, adding new quests, characters and themes to the main production. The Hearthfire DLC allows players to build their own houses, if the homes available in Skyrim’s major cities aren’t up to scratch. It’s fun to build an elaborate mansion in the woods, but Hearthfire is incredibly buggy. From display cases that pop open to mannequins that teleport from place to place, one could mistake Hearthfire for a haunted house simulator. It’s fun, but don’t be surprised if the dining table spread explodes for no reason.

Building a house in Skyrim is fun, but Hearthfire is complicated by an unfortunate slew of bugs.

The first story-driven piece of Skryim content released after the main game is Dawnguard. The DLC introduces the titular Dawnguard faction, who invite the Dragonborn to help them stop vampires from destroying the sun. Along the way, players can join the vampires and even become a huge vampire monster, like the Dracula creature from Van Helsing. The DLC is most important, though, because it contains the character development that the main game missed. Serana, a vampire princess and companion throughout the DLC, is the rarest of Skyrim rarities in that she’s a fully fledged character who changes over time, not just some NPC with two canned responses to every conversation. Dawnguard goes to some dark places, but its emphasis of character strength and development makes it a must-have.

The second DLC, Dragonborn, opens up the island of Solstheim for player characters to explore. Solstheim hasn’t been seen since The Elder Scrolls III, but rumors of another Dragonborn running around killing people compel the visit. Dragonborn is much more akin to the main Skyrim game in that it emphasizes exploration and fighting over character growth, but Solstheim’s sandy terrain and the DLC’s main storyline are both novelties worthy of any Skryim fan. At the very least, Dragonborn can provide a sorely needed change in scenery.

Dawnguard and Dragonborn are both substantive DLCs that come as highly recommended as the main game.

Skryim is the fantasy adventure game of a generation. It has its bugs, and its core narrative could use more brevity, but the vastness of its open world and the many different ways in which the player can engage that world make it a great game. It still looks fantastic years on, and it contains a wealth of content that players can enjoy for years on end.

You can buy The Elder Scrolls V: Skyrim here.