Topple a ruthless crime syndicate from the inside.

Too numerous are the gun games that are all steak or all sizzle. They’re either repetitive grind-heavy campaigns with a skeletal narrative (Lost Planet 2) or a series of set pieces that, while beautiful, are entirely linear (Call of Duty). People looking for a more in-depth alternative turn to violent open-world games like Grand Theft Auto, where you can kill legions of hookers with a rocket launcher. Sleeping Dogs contains something that all three of the aforementioned series lack: a deeply personal narrative. It’s been said that Sleeping Dogs is a clone of Grand Theft Auto, but its more intricate gameplay and deeper narrative force that assertion into question.

Even though I’ve finished the game and all of its downloadable content, I’m still not sure what Sleeping Dogs means. Given this game’s over-reliance on ancient Chinese proverbs, perhaps it’s a metaphor for dogs only being as dangerous as their sense of alertness… or something. At the very least, I don’t think anyone can deny that the name catches attention and raises eyebrows. Indeed, it was the question “what kind of name for a game is that?” that drew me to Sleeping Dogs in the first place.

Sleeping Dogs is an open-world, third-person game that takes place in modern Hong Kong. The game follows Wei Shen, a Chinese-American police officer who spent his childhood in Hong Kong but his teen years and early adulthood in San Francisco. Because of Wei’s firsthand experience with the triads, China’s crime syndicates, Shen is borrowed by the Hong Kong police for one mission: to infiltrate the triads and bring the whole thing down from the inside.

Wei is an undercover cop, but the gang that he’s thrown in with is none the wiser.

Shortly after returning to Hong Kong, Wei is arrested and placed in the same cell as his childhood friend, Jackie Ma. Jackie, an errand boy for the Sun On Yee triad, promises to convince his bosses to let Wei join the organization. Shen’s status as an undercover cop is known only to a handful of other officers, including his by-the-book handler and a ruthless superintendent named Thomas Pendrew.

Upon release, Wei throws in with a Sun On Yee gang led by Winston Chu, a childhood acquaintance. From there, Wei must embark upon dangerous missions to prove his loyalty to the Sun On Yee. 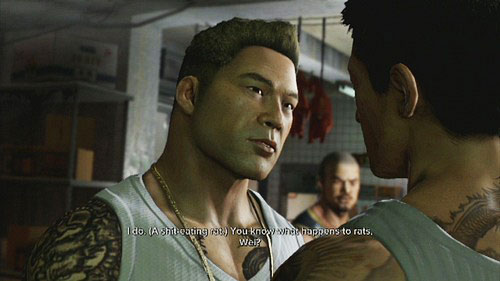 The Sun On Yee is suspicious of newcomers, having caught and killed another undercover cop recently.

As Wei shoots, steals and intimidates his way around Hong Kong, he becomes the victim of numerous inner conflicts. He’s torn between his loyalty to the people he ran with as a child, and his loyalty to the law. He also suffers guilt from the numerous assaults, robberies and murders he must commit in order to infiltrate the syndicate and serve the greater good. To be fair, the idea of a police superintendent condoning drive-by shootings and other acts is a bit depressing.

All of these conflicts make Wei more interesting than the protagonists of comparable series. In Grand Theft Auto, most protagonists are uncomplicated thugs who simply want to climb the ladder. Wei’s ascent up a similar ladder is dogged by his inner demons and his mission as an undercover officer. At the same time, he becomes attached to the gang as he gets to know them better. Winston Chu becomes less an angry street thug and more an aspiring family man, whose genuine care for his people makes him a more sympathetic character. The cohesion of Chinese organized crime makes it more interesting than its American counterparts.

The Sun On Yee is guided as much by care for one another as the allure of profit.

Matters within the Sun On Yee become more complicated when a power struggle erupts. Wei is forced to navigate an increasingly unstable environment and build alliances with different Sun On Yee leaders, called Red Poles. His skills attract the attnetion of the organization’s top leadership, including the shadowy Broken Nose Jiang, and Henry “Big Smile” Lee.

It’s hard to go beyond that premise without major spoilers, but Sleeping Dogs is my favorite game of 2012 and perhaps the most underrated game I’ve ever played. Critics gave Sleeping Dogs positive reviews, but not the critical acclaim that I feel it deserves. Everything that Sleeping Dogs does, it does well. The story is neatly woven into core narrative missions and dozens of side activities around Hong Kong. It all makes for a very cohesive experience, and all of its characters evolve together. 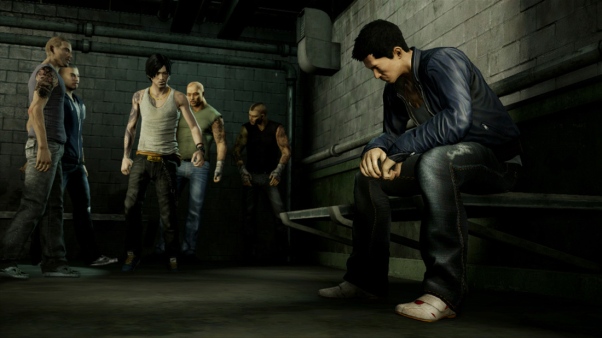 Sleeping Dogs has a quality story.

Luckily, the developers compounded Sleeping Dogs‘s impressive story with some seriously smooth gameplay. You start the game out with martial arts as your sole weapon, but you’ll branch out into guns as the game goes on. The melee combat borrows heavily from Batman: Arkham Asylum in that you can take on crowds of enemies and counter-attack foes in smooth combos. You can learn additional moves from your old Kung Fu master downtown. The gunplay is nothing more than conventional cover-based shooting, and Wei can’t aim for shit. Luckily, you’ll usually have enough ammo for precision to not be an issue.

Because this is a big, open-world game, you can’t expect to get around by walking. You can hijack and drive cars around the city. Sans a few camera issues, like the camera spinning wildly when you try to back up, the driving is pretty smooth. You can also buy cars off of the black market and build up Hong Kong’s most badass racing garage.

Driving in Sleeping Dogs is always a pleasure. You can ram other vehicles or participate in street races.

Now, because this is a Square Enix game, Sleeping Dogs is replete with collectibles. Most of them actually serve a purpose, though. You can trade in jade statues to learn new fighting techniques, and some kind soul decided to leave lock boxes chock full of money just sitting around the city. I usually can’t care less about collectibles that are just there for the sake of being collectibles, but Sleeping Dogs doesn’t have this problem.

The problem that Sleeping Dogs does have is that there’s some racism implicit in a lot of what it does. For example, the game just assumes that all Chinese people know karate, because you’ll fight half the population of Hong Kong before long, and they’re all black belts. Additionally, Wei can gain health by praying at pagodas, and all of the characters have their stereotypical Chinese proverbs in the dialogue. I was sad to see this, because this game gets most everything else right and its reliance on Asian stereotypes was a bummer.

Karaoke? NOW the caricature is complete!

Luckily, the Chinese characteristic that Sleeping Dogs does do well is its crowded cities. Having been to China myself, I can vouch for the attention to detail that went into everything from Hong Kong’s night markets to its mazes of neon signs. The character animations could stand to be less robotic, but the environment feels alive.

Having said that, there are some flaws with the world design worthy of note. The biggest and most obvious is the game world’s lack of traffic. It would’ve been more convincing if the streets had been packed with cars, which I understand is a lot to render but would’ve made this rendition of Hong Kong feel more authentic. It also made it much more difficult to find cars to hijack. In no universe should you have to wait on a Hong Kong thoroughfare for two whole minutes because no cars have arrived.

Now, because this is a Square Enix game, Sleeping Dogs has way too much DLC. Beneath all of the useless skins and vehicles, though, are a few noteworthy gems of story-driven content.

The Zodiac Tournament, the first piece, follows Wei as he infiltrates a secret high-stakes martial arts tournament. The DLC pits him against the greatest fighters in Asia, and is produced to resemble an old movie from the golden age of Hong Kong Kung fu cinema. It clocks in at about an hour of content, but its exotic island locale and roster of new opponents will leave Sleeping Dogs fans happy they jumped on that boat.

The other two story-driven DLC of note are Nightmare in North Point, and Year of the Snake. The former is a non-canon horror-adventure in which Wei Shen faces off against demons from hell, led by a former Sun On Yee Red Pole who seeks revenge from beyond the grave. The DLC is a separate spin-off of the main game, of course, but even some ghoulish mist and fiery-eyed ghosts can’t disguise how short it is. Wei has to drive around Hong Kong defeating three mega-ghosts before facing off against the big baddie himself, and then it’s over. Nightmare in North Point is a short, if dumbly fun, foray into Chinese mythology brought to life, but it misses a lot of opportunities for both laughs and scares.

The second DLC, Year of the Snake, is set after the events of the main game. Wei embeds himself into Hong Kong’s riot response force as a group of religious fanatics seek to destroy Hong Kong. It’s a surprisingly story-free DLC that makes dubious fun as a riot cop simulator, but not much more. It’s certainly underwhelming after the bombastic energy of the main story.

Are beat cops allowed to flaunt tattoos like that?

Aside from a few other issues, like a glitch that sometimes made Wei look like his shirt was a Rubix cube, Sleeping Dogs stands tall in its genre. It stands out because of its dual cop-criminal gameplay system, a prestige system that increases as you complete tasks around the city, and a gripping story. It’s one of those rare games that has decent gameplay in every sector, and its transition to such an exotic setting makes it immediately recognizable. This game comes highly recommended.

You can buy Sleeping Dogs here.