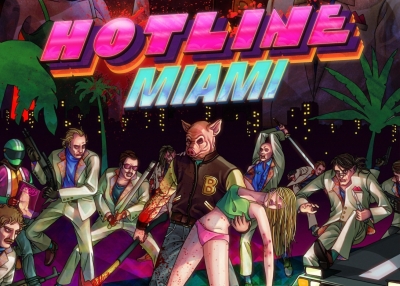 By Ian Coppock, Originally Published on April 19, 2013
I think it’s fair to say that a lot of major developers are afraid to experiment. Some of them certainly have the cash for it, but a lot of mainstream games on consoles and computers alike exhibit a somewhat formulaic approach that improves earning chance at the cost of originality. Get guns, run to cover, point them at baddies, blah de blah. Not so with Hotline Miami, a gory and psychotic top-down shooter that shouts out to the 80’s in both appearance and sound. This is one of those great games developed by people who knew that it would be ridiculous. The payoff is a highly original, arcade-esque adventure with pacing and subject matter that would make Hunter S. Thompson proud.
.
The Story
Hotline Miami‘s narrative roughly encapsulates April ’till July of 1989. Players take on the role of a nameless hitman who accepts anonymous contracts from messages left on his answering machine. Each assignment is disguised with metaphors like “show the audience a good time tonight” and sees the player off to massacre hordes of enemies with bricks, beer bottles, shotguns, and assault rifles, among other things. Your targets are members of an unknown crime syndicate, presumably an enemy of the player’s employer. You also take on police, homeless people, drug addicts and innocent bystanders.
Hotline Miami is divided into fifteen missions that usually began with me leaving my crummy downtown apartment and ended with me standing in a sea of crushed skulls and bullet-riddled corpses. The game is psychotically violent even by modern standards, and probably would’ve gotten a tougher rating if not for the stylized, pixelated graphics. Before each mission, the player puts on one of several dozen animal masks that each grant a different power. My personal favorite was Don Juan, a horse mask that made my bashing door attacks lethal instead of ‘just’ knock enemies out. From there, each level is a top-down maze of rooms in which you must strategically and systematically murder all the occupants. Both you and the enemies die after only one injury, so timing and planning are crucial to a successful massacre. Weapons are strewn throughout the locales the hitman visits, so killing power isn’t usually a problem.
It’s heavily implied that your guy is into drugs; periodically, you wake up in an alternate reality where your apartment is full of bugs, blood and vomit, and you’re interrogated by a panel of anthropomorphic animals led by Richard, a humanoid chicken. Your character also encounters talking corpses and flashes of static before and after the actual missions.
.
It is revealed in the beginning of the game that the hitman’s girlfriend was killed recently, implying a motive for his murderous crusades across Miami. Not to worry, though; the hitman rescues a prostitute from a drug den and the two begin a relationship. Your character doesn’t speak, unless you consider searing an enemy’s face with a frying pan a form of communication, so character development is out the door. It is implied that some of the missions and storyline are presented out of chronological order.
So basically… this game is what someone sees after mixing steroids with mushrooms. The narrative is soaked in surreal, gory wash and various hints at a larger conspiracy are presented. There’s no question, though, that story takes backseat to slamming people’s skulls into counters and bisecting henchmen with swords.
.
The Artwork
.
Hotline Miami hearkens to 80’s-style graphics and presentation. The game is shown in a top-down format, and the entire production is saturated with zany, flashing colors. Rainbows of color and sound explode across the screen during missions, and the game’s soundtrack encompasses hazy synths and dance anthem-like tracks. The graphics are heavily pixelated but not the point that all detail is washed out of the production. Certain items and facial expressions are still distinct. Cutscenes feature talking heads with creepy facial features and harsh dialogue, hardening the game’s drug-infused edge.
.
I found the presentation appropriate for such a violent game. It would’ve been much worse had the designers opted for realism. In addition, the game’s music is shamelessly 80’s in its composition and addiction to synthesizers, which enhanced the retro feeling all the more. The game’s environments are brightly colored, and each level exists in a hyperactive ocean of flashing pink and orange. All of this made playing the game a little uncomfortable after the third or fourth consecutive hour, so I wouldn’t recommend playing for extended periods of time if you get headaches (or seizures) from ridiculous light patterns.
.
Should I get it?
.
Hotline Miami is strangely cathartic. I’m not sure what about a game this violent should be cathartic (nothing that’s not worrying, anyway). If you’re up for a good old-fashioned arcade mashup of brutal violence and combos, then this game is for you. Ten bucks on Steam. If you’re not into ridiculous violence or your tastes have moved past the capacity for retro graphics, then give it a miss…. if you must… but I want more searing frying pan.