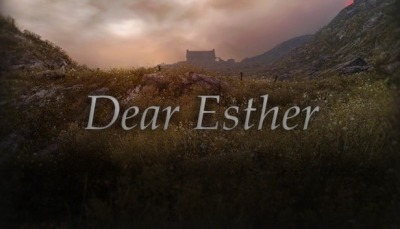 Search for inner closure on a depopulated Scottish island
Release: February 14, 2012 (PC)
May 15, 2012 (Mac)
By Ian Coppock, Originally Published on May 10, 2013
.
In a lot of games, exploration is the fun goo that binds a package of features together. It’s the framing device for uncovering the truth in the Deus Ex series, and the binding force behind Myst‘s soul-crushingly difficult puzzles. Never before have I played a video game solely driven by exploration, where the sole means of progress is just to look under rocks and stare blankly at a virtual sky. Such is the case with Dear Esther, a 2012 indie game that sparked a fierce debate on what comprises a game. I can assure you that Dear Esther is very much a game, and very much a good one.
.
The Story
.
Though Dear Esther‘s aesthetic and premise suggested a horror theme to me, the game is no such thing. You are an unnamed man who arrived to a remote Hebridean island off of Scotland’s coast, though his reason for doing so remains vague. He arrives on a windswept shore facing an old lighthouse, and immediately begins walking towards a distant radio tower.
.

As the man progresses along the shoreline, he begins reading a series of letters addressed to a woman named Esther. The player must progress towards the radio tower for more letters to be read. From his letters I gleaned that the man is probably Esther’s widower, left alone after his wife was killed in a car crash. In the letters, the man says that he attempted reconciliation with his wife’s killer, an alcoholic named Paul, but was unable to do so. He also mentions trying, and failing, to find the exact location of the car crash, despite having all the reports and testimonies.

.
In addition to recounting the crash, the man also muses on the history of the island. He references a hermit named Donnelly, who lived on the island in the 19th century. He also discusses Jakobson, a Scandinavian shepherd who left behind the abandoned shacks and cottages the player occasionally bumps into. It is also implied that the man visited or lived on the island, hence his presence here.
.
If you’re sensing that I’m having trouble coming up with relevant story points, it’s because a lot of the narrative is intentionally vague. Towards the end of the story, the man sometimes combines the four persons he talks about into Esther Donnelly and Paul Jakobsen, so it’s unclear whether some of the characters are real or imagined.
.
I played Dear Esther twice, and the letters the man read changed each time, which made me think of someone ripping up a choose-your-own-adventure book and then tossing the fragments into a lottery machine. I like the concept of a vague narrative, especially in this instance, but I feel like jumbling up the letters into whatever story the game sees fit to tell is a little lazy. Overall, I got the impression that the story is supposed to be poetry readings that provide background noise to the exploration, and maybe that’s okay.
.
Though the story of Dear Esther is vaporous and riddled only with the implied, the actual writing is beautiful. The man seems to wax poetic in his reading, combining simple words together into lines that denote the gravity of his loss without becoming too specific. I’m a sucker for British accents anyway, but I think the voice actor they picked for the protagonist did a particularly excellent job. Indie games aren’t known for stellar voice acting, but he put a lot of emotion and gravity into his words.
.
The Artwork
.
The environments of Dear Esther are dark and foreboding, but hardly repulsive. Your character carries a flashlight for exploring the numerous wrecks and ruins you’re bound to stumble across. At the beginning of the game, you’re prompted to explore an old lighthouse, which initially set my hairs on end. The interior environments are detailed with the debris of habitation and damage from storms.
.
The exterior environments similarly hint at past habitation. You walk past minutely detailed scenes, such as a pile of barnacle-encrusted lobster traps, as well as rows of old fence lines and ancient pasture walls.
.
Throughout the game, the player encounters messages written in a teal, phosphorescent paint that allude to Biblical passages. The character himself makes frequent reference to “Damascus lost” while talking about the loss of Esther. My favorite part of the game was the third chapter, in which the man must explore a series of brilliantly lit caverns that are ridiculously detailed. One cavern contained hundreds of stalactites, and another was a massive waterfall cave. To me, this was the most contemplative part of the journey. When visuals can reinforce that feeling, they shore up a leaky narrative or add to a strong one.
.
Jessica Curry, who is perhaps the gaming world’s best-known indie composer, scored a haunting and solitary game with complementary sounds. Slow, sharp violins and wistful piano ballads abound, while the cavern sections carried the sound of wind as well as low, mournful singing. She is to be commended for so excellently matching a game’s soundtrack to its appearance and premise.
.
Though the visuals are beautiful and well-done, the level design isn’t great. I got turned around about five times throughout Dear Esther and spent a half-hour looking for a cleverly-disguised staircase or a little passage I’d missed. The path construction in this game felt a little jumbled and confusing. I think this was the level designer’s attempt at creating a truly open world, but in some places it felt too excited and all over the place.
.
But, I’m willing to be merciful. Dear Esther was a therapeutic piece of artwork that stirred me as moving pieces of music or books do. When it was first released, the gaming world debated whether pure exploration can carry an entire game, and I argue that it can. I think that an interactive artwork with a visuals and story, never mind how said visuals and story are represented, is a game. Besides, action sequences wouldn’t have worked for a contemplative, exploratory game such as this. Dear Esther is a game. A good game.
.
Should I get it?
.
Dear Esther is not for those of you with five-millisecond boredom thresholds, but I recommend it for anyone interested in a poetic narrative. The only skills you need to play this game are some aptitude with the WASD keyboard configuration and the ability to hold down the Q button, so it’s quite open to anyone. I found Dear Esther on Steam for $10 and it took me about two hours to complete the first time around. I know I complained about the interchangeable story, but in retrospect such a feature ups its replay value. Dear Esther is not a perfect game, but it’s a strong argument for video games being art.