Save the Holy Land, and yourself, through the art of assassination.

I was scrolling through my reviews the other day and brought myself back to Assassin’s Creed, which was the first review I’d ever written. I then realized that i haven’t reviewed the four games leading up to that one, and thought it would be a good idea to do so.

Long before the adventures of Connor, the Assassin’s Creed series began in another time and with another protagonist. Assassin’s Creed takes us to the Middle East, and not because we’re playing Call of Duty and have been dropped in to shoot the brown people. Rather, the game is a historical fiction narrative. My friend Bret introduced me to this series a few years ago. It’s not perfect, but it contains novel gameplay and is worthy of your time to review.

Assassin’s Creed operates on a pair of interlocked story lines. The first takes place in 2012 and follows a bartender named Desmond Miles. Desmond has been kidnapped by the shadowy Abstergo Corporation for reasons he can only guess at, until an asshole scientist reveals that his DNA contains the memories of his ancestors.

Desmond is strapped into the Animus, a machine that can scan those memories and turn them into a simulation. He doesn’t know what Abstero is looking for, but it’s locked in his head somewhere. 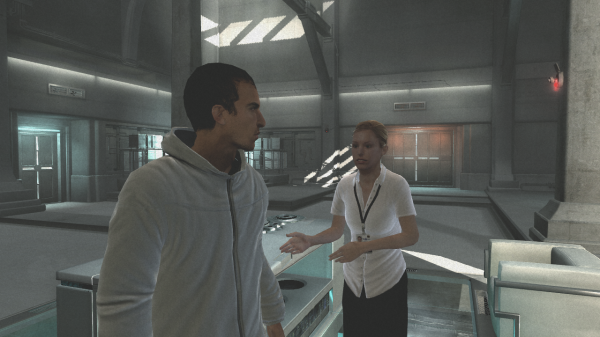 Desmond is a captive of this strange company. One of the scientists, Lucy, is empathetic to his situation.

In the Animus, Desmond takes command of his ancestor, Altair Ibn-La Ahad, a Syrian assassin who was active during the Crusades. The story begins as Altair and two assassins are exploring ruins beneath Jerusalem. Arrogant and overconfident, Altair breaks the assassins’ tenets in order to be more “efficient” at his job.

Altair’s aloofness costs the group dearly when they encounter a group of Christian knights, and he barely escapes without the treasure he’d been sent to retrieve. He returns to the assassins’ fortress empty-handed, infuriating his master. To make matters worse, the knights follow him to their fortress and lay siege, killing many innocents. 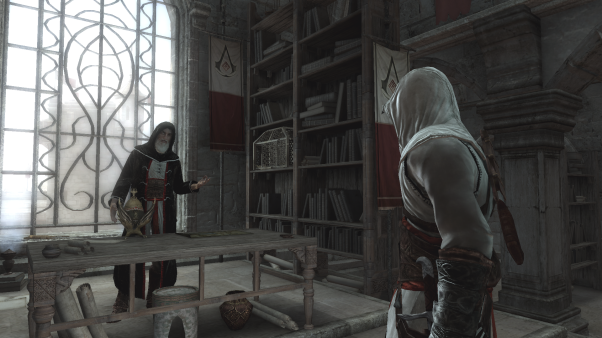 This has not been a great day.

Though the knights are fought off and one of Altair’s buddies comes back with the treasure, he is berated in front of the entire order and demoted from master to novice. His master, Al Mualim, offers him a chance at redemption: kill nine men who threaten the peace of the Holy Land. He begrudgingly takes the job and leaves the fortress.

From there, Altair must kill these nine targets dispersed across three major cities. Assassin’s Creed does a good job of portraying Altair’s changing character, as he becomes less aloof and more willing to follow the tenets of the titular assassin’s creed. As he travels between cities and makes his kills, Altair begins to suspect that the nine men are working in concert, despite being on opposites sides of the war. 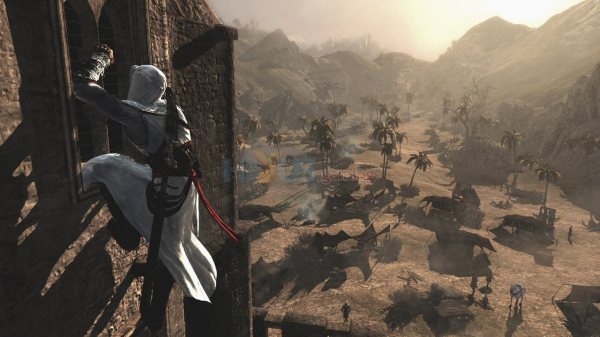 Altair’s journey takes him across the Middle East, into areas held by both sides of the Crusades.

Altair begins to change his perception with his journey. Assassin’s Creed explores themes of murder and humanity with each conversation. Though the assassin order’s work is dark, they encourage themselves to stick with the guilt that comes with taking a life, as it makes them human. This type of writing is a rarity in a genre when lots of deaths are met with sassy one-liners from the protagonist, instead of a more realistic reaction.

In the modern day, Desmond is given breaks between Animus sessions and attempts to escape from Abstergo. Though he initially believes that Altair’s conspiracy was long in the past, he begins drawing connections between his ancestor’s targets and the company now holding him hostage. Desmond doesn’t evolve much as a character, beyond a sarcastic every-man, but he starts uncovering a scheme himself. All of it is linked to whatever Altair discovered centuries ago. 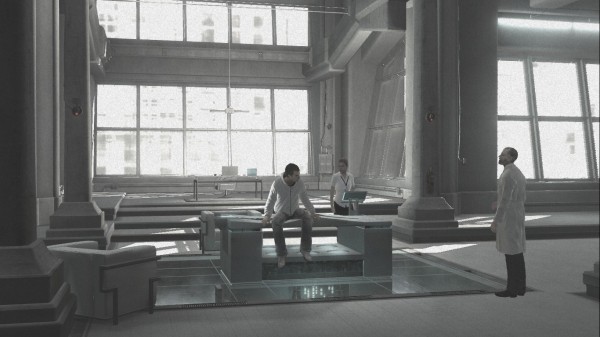 Desmond plays ball with his captors by day, and seeks a way out by night.

Assassin’s Creed is an open-world game, in which Altair can roam freely in massive, gorgeously detailed cities. He can ride horses through the desert to reach his destination, and can explore city blocks filled with open-air markets, mosques and other landmarks.

Assassin’s Creed does a good job of portraying the hellhole that was the Crusades from a neutral standpoint, portraying the atrocities that both Christians and Muslims committed during the war. It makes for an interesting game when you hear Christian and Muslim preachers each hawking their idea of a God and of victory. 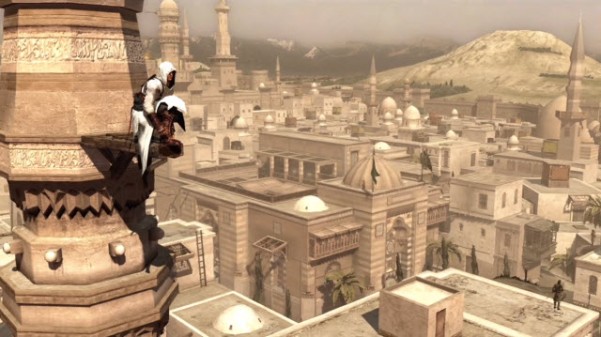 Clues as to your target’s whereabouts are scattered in each city. Finding them all can be a challenge.

Altair’s gameplay mechanics are built around stealth and hiding in plain sight. Though he has a sword for getting out of hairy situations, Altair can assassinate enemies with a retractable hidden blade. Players must manually push past people, hide and look inconspicuous. The only issue is that combat in this game is a breeze; you simply wait until your opponent attacks, then counter-attack with lethal force. The game’s ease of combat makes running and hiding much less of a must-do.

Altair has other options if the guards get the jump on him. Players can elude local law enforcement by breaking the enemy’s line of sight, but must remain hidden until the danger passes. Altair can also take shelter at your friendly neighborhood assassin hideout, but only if he’s not being chased by guards. 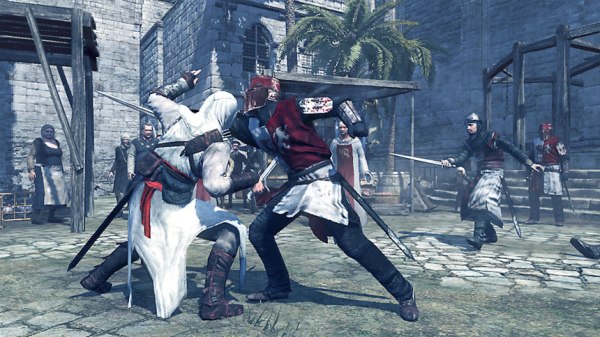 Altair is an expert swordsman who can cut down swarms of guards. Assassin’s Creed doesn’t do enough to reward discretion.

Assassin’s Creed‘s health mechanic is novel; it’s portrayed as synchronization with the actual events of the ancestor. You can lose health by getting hit by enemies, but you can also lose it by doing something that the real Altair wouldn’t have, like killing a civilian. You regain synchronization by completing a memory or hiding from danger, confident in the knowledge that the real Altair is much more of a badass than you.

The actual assassinations require planning and skill. Altair must gather the aforementioned clues on each target through investigating leads. These missions include pickpocketing intelligence, eavesdropping, or just beating the crap out of an informant. You only need so much information to start the assassination mission, but the more you have, the better prepared you’ll be. The PC version of Assassin’s Creed contains more missions and side activities than either console edition. 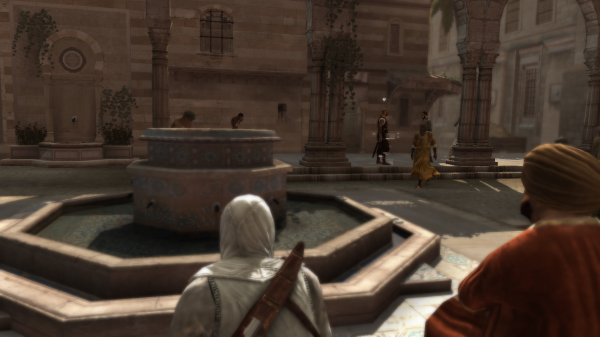 Being a good assassin is all about detective work.

Now that we’ve got all the cool stuff out of the way, I have to do my job and tell you what’s wrong with Assassin’s Creed. The game is very repetitive. All nine assassination missions begin, operate and end in the exact same way. Go to city, gather info, kill target, go home for a pat on the head, rinse and repeat. Not once does the game deviate from this formula, and by mission five or six I was pretty sick of it.

The game’s controls are pretty smooth, even for a PC port, but they’re not without problems. Altair can seamlessly parkour over obstacles and perform other feats, but the problem is that the run and jump functions are tied to the same key. I lost count of how many times I ran near a parkour-able object and accidentally performed gymnastics on it. This can make chasing targets or fleeing from guards needlessly frustrating. 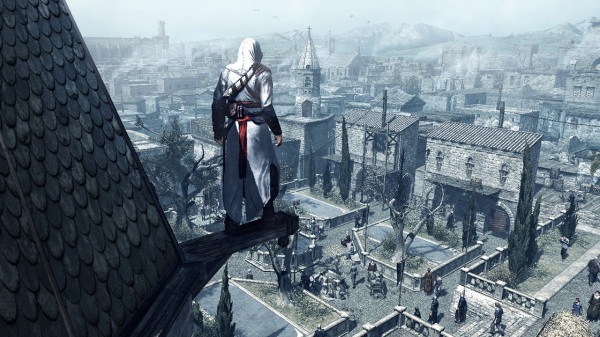 No! I wanted to go for a jog, not ballet-hop to the top of a guard tower!

The other gameplay feature I took issue with were the beggars. Not to say that I detest homeless people, but in that they ask for money that Altair does not have. Assassin’s Creed does not have an economy, so to be badgered by beggars who won’t leave you alone unless you outrun them is irritating. 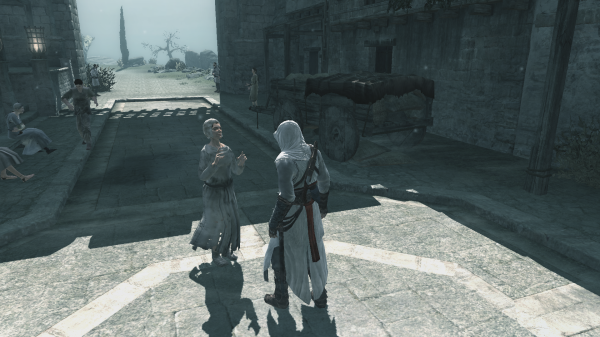 Beggars can mess up your approach to a target if you’re not careful.

Assassin’s Creed‘s environments are wonderfully designed. Each city is done out in painstaking detail, down to the orange vines on the merchant’s villa. As in other Assassin’s Creed games, commoners and soldiers go about their business. They serve as more than a way to hide, or to fight. They make the environments feel convincing.

Altair’s outfit is purposefully designed to make him resemble a monk, but that won’t stop you from getting preached at by priests and imams. It also won’t stop awesomely bearded carpet merchants from insisting that their prices are the best in the Middle East. There’s a big, beautiful rural environment linking these cities together, but it contains no missions or much impetus at all for exploring it. 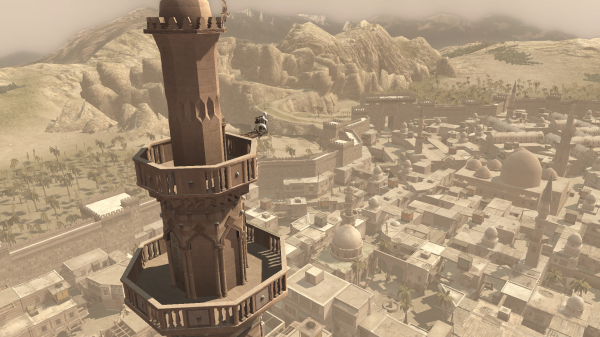 Assassin’s Creed has decent character animations and voice acting, but nothing truly special. The voice acting confused me because they hired an American to voice the Syrian Altair, which makes even less sense when all of his compatriots have Syrian accents. I get that this was probably done to make Altair’s dialogue more discernible to a western audience, but it broke immersion to hear him talk.

The music, though, is special. It incorporates the traditional western orchestra as well as eastern drums and chants. Brazen horns sound when you arrive to each city, which made me feel like a goddamn sultan. The music was carefully arranged to chime in at all the right moments, and that can make a game significantly better. 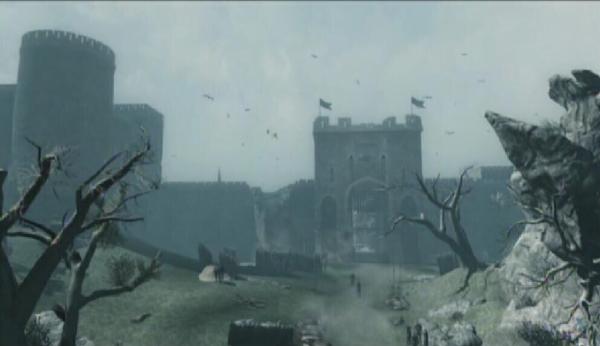 This first chapter in the Assassin’s Creed saga is not without some struggles and speed bumps, but it’s a good start to one of my favorite series. It does most everything well enough to stand out in a crowded field, and I recommend it to everyone from history nerds to stealth fanatics. Get cutting.

You can buy Assassin’s Creed here.