.
Double Fine’s latest puzzler pits three checkered characters against a talking cavern
.
Release: January 22, 2013 (Playstation Network)
January 23, 2013 (OS X, Windows, Xbox LIVE Arcade)
.
By Ian Coppock, Originally Published on January 29, 2013
.
Portal fans clamoring for their next morsel of puzzling may find such a gem with The Cave.
.
Designed by veteran game builder Ron Gilbert, The Cave is a side-scrolling puzzler that conceals a somewhat bleak theme with bright, pastel-like graphics. In the story, players select three characters from a pool of seven people who have all been drawn to a mysterious cave (the game’s namesake; who’d have guessed). Characters include a hillbilly, a heroic knight, a scientist, and a brave adventurer. Once the player has made their choices, the trio descends into the Cave to “learn something about themselves and who they might become,” according to Gilbert. The characters you pick determine what puzzles you’ll face.
.
The Story
.
The Cave is far more than a day spent spelunking, just like the “Cave” is no ordinary cavern. The entire cave is an all-knowing, sentient being that comments on the characters’ progress, much like GlaDOS in Portal. The Cave character is less a sadist and more a comedian, who dryly points out the characters’ mistakes and flaws as they progress further into it. The cavern contains entire worlds beneath its walls, including a castle, a futuristic museum and a Himalayan temple.
. 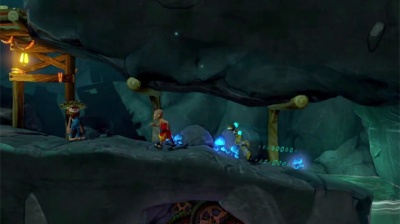 Each of these areas contains various puzzles that explore the pasts of the three characters, and it becomes clear that these curious explorers are far from innocent. This is also made prevalent in the gameplay; when I gave this game a go, I picked the Knight character. In his quest to win the amulet of a princess, the knight allowed her to be eaten by a dragon, who then spat out the amulet. Quite a twist from the conventional Shrek-style action rescue.
.
Controlling a trio of mischievous backstabbers (even the stoic Chinese monk was not above suspicion) changed my relationship to the story and characters significantly. I found myself hoping that my trio (the Monk, the Knight, and the Time Traveler) would fail, as their past wrongs were not exactly pleasant. Cave paintings located throughout the game revealed small pieces of the characters’ pasts; their triumphs, their failures, and what led them to journey here. The characters themselves are completely silent save for grunts and shrugging. Allowing the gameplay and artwork to tell the story fit the tone, but it wasn’t exactly contemplative.
.
This tension drove me to continue playing, to see how the Cave would react if these three were victorious. The characters also interact with various NPCs who are seeking fortunes of their own, and with whom I had to team up frequently to advance further. As my trio advanced towards the enlightenment that the Cave had promised, the story filled me with anticipation, in the same sense that watching an escaping movie villain did. In the end, what the story had to offer was not unexpected, but it was still satisfactory.
.
The Artwork
.
The Cave’s art and graphics evoke the spirit of 3D cartoons, such as Jimmy Neutron. The fuzzy, colorful environments are anything but bleak, as one might expect from a cave. Warm, glowing plants, fleshed-out buildings, and huge backdrops round out The Cave’s sense of epic. I loved the environments, especially the well-lit medieval castle and the submerged treasure caverns. The game has its own flora and fauna including massive, spiky cave dragons, entire forests, and fish-filled oceans lit through cracks in the cavern ceiling miles above. This sense of scale represents a near-perfect balance between backdrop and foreground artwork, which, especially for a side-scrolling game, is crucial.
. 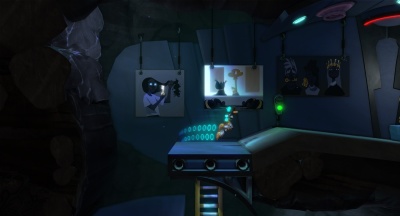 .
Though the characters, story, and environments are a win, my favorite feature was the Cave character. As I mentioned up top, the cave is very much alive, a sentient spirit who also narrates the story. Through narration, he is able to offer hints and foreshadowing, and is quick to point out the flaws of the characters you choose. He keeps the game’s mood light with a variety of jokes, most of which aren’t black comedy, like GlaDOS. Instead, he pokes fun at the game’s premise and his own occasional shortcomings (“is Zen-ness a word? I don’t know, I never took Comparative Religions”). He’s also quick to break the fourth wall and engage you, the player, with jokes, thoughts, and the advocacy of laughing evilly.
Should I get it?
.
The Cave does have a few flaws, as all games do. The game’s length is relatively short; I beat it in about 4-5 hours (and trust me, if I can beat a puzzle game that fast, you can probably do better). Some of the puzzles were a little ridiculous as well, with repetitive gameplay elements and stroke-of-luck-style problem-solving. I know my premise is to not talk about gameplay so much, but I’d be doing you a disservice if I didn’t highlight the flaws. Some of the most beautiful games in the world had crappy gameplay, so if I find something about that that bugs me, I’ll let you know.
.
My recommendation? If you’ve got $15 and some time to blow, buy The Cave. It’s a challenging puzzler that keeps both a light mood and a heavy heart, all against a plethora of fun art. Who knows? It might make you think about your own past. As the Cave is quick to point out, “You might learn a lesson, even if these three do not.”