Lately I’ve had more time on my hands, which makes no sense considering the impending end of college. But while I just LOVE drowning in a muddy pile of homework and obligations, I took some time off from life last week and decided to play Mass Effect, a game that successfully combines good old-fashioned space adventure with a galaxy full of original ideas. Bioware sticks to what they know, and what they know is how to deliver a mostly excellent story well worth 20 hours or so of gameplay.

The Story
.
Mass Effect is a science-fiction RPG set almost two centuries in the future, where humanity explores the stars using advanced alien technology discovered on Mars. The game’s namesake refers to dark matter, known in-game as Element Zero, which has the ability to increase or decrease an object’s mass. This cool little chemical makes it possible for instantaneous space travel through giant slingshot-like devices called Mass Relays.
.
The story begins roughly 20 years after humanity made first contact with a colorful alliance of alien races. What’s awesome about this game is that you get to create your player character, Commander Shepard, by picking male or female templates and then customizing such features as skin color, face shape, and hairstyle. The resultant badass-in-the-making is your space-saving gunslinger, to whom you can assign a variety of powers and weapon specialties. The game plays like a pretty conventional shooter, with a large palette of weapons and plenty of cover to duck behind. Even if you’re not a fan of shooters, the gameplay is simple enough and the story awesome enough for the game to still be worth your time.
.
The other cool thing about Mass Effect is that your character can talk, a rarity in games where you make your protagonist. A conversation wheel mechanic is used to make your point to other characters as nicely or rudely as you please. Through this, players can characterize their Shepard to be compassionate or a hardass. Like other Bioware games, your character has something of a morality system, but it’s not based on good and evil. It’s based mostly on whether you reach out to other alien species or brush past them xenophobe-style.
.
Shepard is also second-in-command on an experimental warship called the Normandy, and assumes control of the ship just in time to embark on a perilous race to save the galaxy from an ancient threat. From there, the plot is heavily inspired by words like epic and grand-scale, though I hesitate to use them sarcastically. The game really does have a tight, interwoven plot, which sees Shepard visiting a variety of worlds all to prevent galactic destruction. There’s also an interesting story dynamic in that Shepard works at the behest of both the human military and the combined authority of an alien alliance, whose leaders don’t always see eye to eye. This creates a tension and leaves the player wondering to whom to be more loyal.
.

As Shepard, you face off against a rogue military operative named Saren, who commands an army of creepy, flashlight-headed robots called Geth. The story’s a little more complicated than that, so rather than spoil it, I’ll dance around it like I usually do. 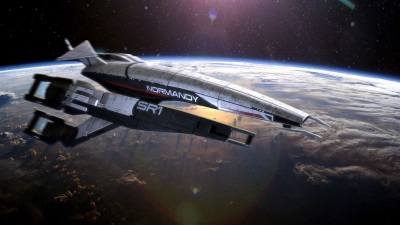 The Normandy, Shepard’s ride. This sleek, cloakable ship leaves most competition in the space-dust.
.
Mass Effect has some nice pacing, and the main plot is supplanted by at least one or two novels’ worth of history and stories. Shepard carries a handy dandy codex that you can fill as you go, getting information on everything from Hanar customs to the Quarians’ exile from their homeworld. Side missions explore the joys and perils of space life, as well as the sometimes contentious relationship humans share with other species. All of this combines to build a decent narrative that can be as focused or expansive as the player wants.
.
Shepard also gathers a multiracial squad to help him bring down Saren, and you can build close friendships with them and learn their back stories. One or two are also eligible for a romantic relationship, though this creates that sort of video game guilty-silliness dynamic. Your squadmates also vary wildly, ranging from a petite archaeologist to a grizzled 500-pound bounty hunter.
.
Shepard can use the Normandy to travel across the Milky Way galaxy, which is necessary for both the main story missions and side quests that see you land planetside in a bouncy buggy-tank called the Mako. Shepard can also scan planets for rare artifacts and archaeological treasures, which I thought was cool, though I wish it was  more than a text window. All of this makes the galaxy actually feel huge; Shepard visits several worlds for the main story and can crash-land on probably two dozen others if he/she so elects.
.
The Artwork
.
Mass Effect has some beautiful artwork, with expansive environments and colorful alien species. The galaxy is also studded with vivid planets and bizarre, beautiful landscapes. That being said, the game was released in 2007 and its visuals haven’t exactly aged well. The character animations are a little stiff and Shepard seems to suffer a stroke every time he tries to pull a happy or sad facial expression. Shadows sometimes appear distorted and it can take time for environmental textures to load all the way. But, these are minor concerns in the face of the game’s sheer visual awesomeness.
.

The Citadel, a space city that serves as the heart of galactic civilization, and one of my favorite visuals.
.

Mass Effect definitely goes for an arty spin on realism, probably to bring out the color and visuals in the alien races Shepard encounters. Some of the planetary environments can get a little monotonous in color, but I was distracted from this by being able to drive across the terrain. The game’s musical score reeks of geek, with plenty of synths to pump the atmosphere full of sci-fi awesomeness. The music turns a little more epic for space battles and the like, but this creates a pleasant balance rather than a cognitive dissonance.

Should I get it?
.
Yes. Mass Effect was one of the highlights of generation seven and received critical acclaim across the board. I echo most of these sentiments, save a few art flaws and story quirks that are mostly irrelevant in the grand scheme of things. You can find a copy of the game for $20 or less, so get cracking! This game is a must-have for any story geeks or shooter fans.